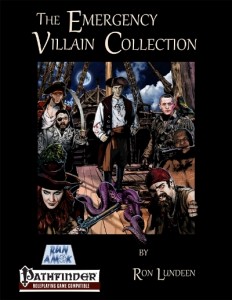 We’ve all been there, at least I know I am – you just can’t crank out *YET ANOTHER* villain statblock, lavishly crafted, only to have the poor sop being curb-stomped by the PCs – whether by dumb luck, by exceedingly strong PCs or by a combination of factors. Enter this collection of NPCs, ready to drop into your campaign, so what exactly do we get?

Well, first of all let me explain the basics – some villains herein work best in certain environments and thus, the best suited terrain etc. is summed up in the beginning. The pdf does sport information on villain motivation, advice on using the NPC, henchmen if appropriate as well as suggestions for ramping up the difficulty of the respective adversaries, advice I know I need for my players… It should also be noted that you should not consider the characters herein as nameless statblocks – while their respective write-ups sport generic monikers, the entries themselves do sport significant and well-written background stories including names etc. – so yes, this collection is not an NPC Codex-like accumulation of nameless statblocks, but rather a collection of NPCs that deserve the “character” C.

But what villains do we find herein? The first would be the Verminous Brawler – a worm-that-walks come pit fighter who is NOT actually evil, despite his monstrous appearance. This villain is designed story-wise to put a beating on PCs, but not a lethal one, offering a built-in mystery and quite an impressive adventure in the making. With 2 brothers as henchmen, the write-up is fun and compelling.

Grammy Knuckles can be considered the product of adventurer-murder-hobos: When her tribe was slain, the goblin bard/witch turned midwife and her nasty goblin runts began campaigns of pillaging and theft, rendering this an interesting moral conundrum – add a unique vehicle to the fray and we have a nice low-level investigation with a twist in the making here. Most doppelgangers are narcissists and schemers, yes – but few are as nasty as Dax, who gives psychopaths a bad name, using his powers to frame the PCs – let’s hope they’ll play their cards right or they’ll end up in jail…or worse.

Lady Viedda Warborn is not a villain – the half-elven maid is actually a hero in the traditional sense – unfortunately for the PCs, the same cannot be said about her nasty squires, compulsive liars and manipulators dandasukas who are doing their best to taint the hero and misguide her towards a seemingly inevitable downfall… Even the nastiest of fey do have a sense of what is proper and when a lurker in light vivisectionist particularly fascinated by fungi and biological warfare was exiled from her own, you know you have a nasty, nasty adversary at your end -even before her cadre of nasty fungal blindheims.

A story of exotic tragedy, the yuki-onna samurai Matsuya is hunting the grating and honorless drifter that proved to be her undoing – alongside yeti ninjas (!!) as footsoldiers serving their winter demon queen. Pirates that encounters unspeakable horrors, driven mad, haunt the coastal stretches – and finding the ruined home-town left in the wake of cosmic horrors may not only pit the PCs against the maddened captain and his crew, but also against the all-consuming threat that broke the mortal’s spirits.

I am a big fan of lovecraftiana and the subtle themes in the influence of the denizens of Leng in various APs makes me hope for a payoff of these subdued themes in some future AP – until then, a denizen of Leng assassin with hounds of tindalos as hunting dogs should not only make for an uncommon, but also highly lethal build to challenge those meddling PCs. Finally, a treant consumed by rage and his satyr entourage provide a nice and deadly encounter in the end. The CRs herein range from CR 1/4 to CR 13, as listed in the index by CR at the end of the pdf.

Editing and formatting are top-notch, I noticed no significant glitches. Layout adheres to Run Amok Games’ printer-friendly b/w two-column standard. The pdf comes with ample of original pieces of b/w-artworks for the adversaries and the pdf comes fully bookmarked for your convenience.

Ron Lundeen’s builds herein are interesting in that they go beyond the requirements of the format – they not only provide compelling builds, their use of uncommon template combinations and interesting base creatures render these builds more than basic throwaway creatures. Indeed, the NPCs herein breathe thanks to the combination of interesting build choices and the compelling prose – granted, you can ignore the prose, but the sheer inspiration that suffuses some of them and covers a wide breadth of scenarios etc. can be considered the true star here – when a write-up and presentation inspires to craft a module (or at least an encounter) around these villains, one can definitely call a pdf a well-rounded offering. My only gripe here is that I have been terribly spoiled by the builds in Faces of the Tarnished Souk and Scions of Evil – this would be my reference, were it not for these two books. That being said, this still ranks among the best villain-collections out there and deserves a final verdict of 5 stars +seal of approval.

You can get this cool villain/encounter-collection here on OBS and here on d20pfsrd.com’s shop!
Endzeitgeist out.