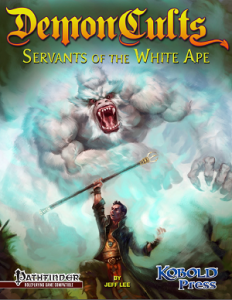 The fifth Demon Cult introduced by Kobold Press’ series details what could be considered the most pulpy tale in the series yet – when a disenfranchised aristocrat had to escape into the jungles and stumbled upon a hidden, ruined city, Josef Kortz would have not dreamed that the carnivorous white apes haunting the ruins would one day bow to him – and bow they do, for he is the summoner that commands the Great White Ape, his eidolon being akin to their tribal deity. Over years of study and careful planning, the mad master, now known as the New Father, has commanded the white apes in combat, subjugating all that dare oppose him and his simian slaves. Kortz and his powerful eidolon receive statblocks and so do his simian warriors, but that’s not all – the awakened apes spread a dread condition, the spellscourge, which not only renders those infected into primal, degenerate and evil undead savages, but also allows them to devour magic. Yes, this pretty much could have been drawn from the pen of Rider Haggard or similar authors and yes, we get a sample couatl.

Now on the anal-retentive/nitpicky side, the template does sport a minor terminology hiccup, but none that would impede functionality. As always in the series, we do receive copious hooks to organize, potentially, a whole campaign with multiple choices for each general array of APL-groups and, as has become the tradition, the quality of these hooks is superb and diverse, providing narrative potential galore. Midgard-specific sideboxes help fans of the setting use the cult. The two new magic items, the unique staff of the father (okay, could have used some unique abilities…) as well as hides made from the white gorillas both are cool and diverse… the latter also allowing for the spreading of the dread disease.

Editing and formatting are top-notch, I didn’t notice any significant glitches. Layout adheres to a modification of Kobold Press’ beautiful 2-column full-color standard, with the borders evoking the theme of the gorgeous front cover..of installment #4, which feels like an odd oversight. The pdf comes fully bookmarked for your convenience.

All right, I’ll come right out and say it – I’m biased regarding this pdf. My childhood heroes were Conan and Solomon Kane; where other kids liked He-man, I was a fan of the tales of sunken Lemuria and Red Sonja remains one of my favorite heroines. I adore the pulpy feeling this evokes, the sense of ancient gravitas this evokes, the theme of disease and degeneration spread by the isolated apes – all of that sends my facial muscles smiling in a major way. I can’t help it, I’m sorry, but for me, this hits all the right notes – this feels savage, brutal and inspired to me and captures my interest infinitely more than yet another bunch of hooded sops worshiping abyssal prince 386-b. This resounds with the themes I adore in fantasy, with a threat that is not one of a simplified morality, but one that attacks civilization and what we consider the foundation of society itself – and then adds the threat of losing magic for yet another nasty spike, merging themes of classic literature and amplifying them via the collective mythmaking we engage in while partaking in a roleplaying game session.

Now if the above left you cold and sent you shrugging away, I can understand that – I’ve seen the set-up before as well; however, the execution is significantly better than in most variants of the theme I’ve seen and personally, I absolutely adore this installment of the series. Yes, the supplemental material is slightly less pronounced than in the previous ones, but I can’t help myself – I love this pdf. It showcases well the strengths of Kobold Press as a publisher – the narrative potential, the evocative dressing. Jeff Lee, delivers here and my final verdict, in spite of e.g. the layout-hiccup, clocks in at 5 stars +seal of approval; however, be aware that this is predicated upon my own personal preferences – if the basic idea does not appeal to you, detract a star.

You can get this awesome, pulpy book here on OBS!