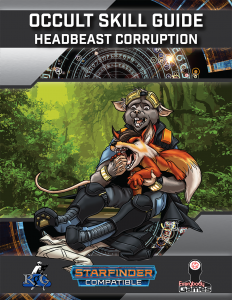 This installment of the Occult Skill Guide-series clocks in at 9 pages, 1 page front cover, 1 page editorial, 2 pages of SRD, leaving us with 5 pages of content, so let’s take a look!

If you haven’t yet had a corruption-pdf, fret not – all rules required are included herein. Essentially, corruptions represent multi-stage changes to characters that fall roughly in two categories: Complex afflictions, and the lure of dark powers. When you e.g. remember Ravenloft’s dark powers, which grant potency, but also drag further into the darkness, you’ll have a good idea. Corruptions, obviously, had been originally intended as representations of therianthropy and the like back in their first iteration, but Alexander Augunas has seriously expanded the concept in his complex total redesign of the engine for Starfinder.

If you haven’t already, I strongly suggest checking out the corruptions available for the game – particularly if you plan on playing e.g. Gimmerspace or the like. They also represent the vagaries of magic, and, like the entire Occult Skill Guide-series, ultimately help make magic in Starfinder feel less like just another type of technology. I provided a full explanation of the engine in previous corruption-reviews.

The headbeast corruption may be contracted by transmutation going horribly awry, by curses, gravity, or even stranger phenomena. The victim will experience light-headedness, and gravitate towards simple and pleasurable activities. This corruption has a peculiar virulence: Every hour the victim does not engage in stimulating activity accrues one corruption point. This EXPLICITLY includes sleeping and eating. Yep, you have a reason to stay awake… At this latent stage, the victim can be intellectually rehabilitated, and, unsurprising, the save here is Will, the associated ability score Intelligence. The manifestation is btw. a +2 enhancement bonus to Will-saves versus negative emotion effects, and a corresponding increase to being targeted by e.g. Antagonize or being demoralized.

At stage 1, the character gets the absentmindedness and jovial temperament manifestation improves, and each corruption point accumulated decreases height and weight by 5% of the original size – just the head remains unchanged. The Absentmindedness manifestation, btw.? When hit by a mind-affecting effect, roll a d20. On 17+, you are unaffected, and at higher corruption stages, that improves to up to 11! (So yeah, when you’re dealing with super potent mind-slavers, there might actually be a reason to go for this corruption…) Jovial temperament enhances your Diplomacy and Survival to improve creature attitudes.

At corruption stage 2, the jovial temperament’s bonus applies to Will saves in general, and the victim shrinks in size and takes reductions to Wisdom and Intelligence…at stage 3, this corruption locks you down to Int and Wisdom 3, but further increases the bonus versus negative emotions….and also: Nightmare fodder:

“Even as the victim’s body seemingly withers away and retreats into their head, they gain the temperament of an eager puppy and have never seemed happier.” That…kinda got to me. It seriously, thoroughly creeped me out.

Editing and formatting are top-notch, I noticed no glitches on a formal or rules-language level. Layout adheres to the series’ two-column full-color standard, and the pdf has no bookmarks, but needs none at this length.

Alexander Augunas’ headbeast corruption is genuinely one of the most disturbing things I’ve seen in a long while. Jacob Blackmon’s art makes them seem so adorable – like kittens or puppies. And knowing that they are beings who lost their sentience to happiness? Yeah, that is a genuinely frightening thought. This pdf straddles the line between adorable and nightmare-inducing perfectly, making it my favorite corruption so far. 5 stars + seal of approval.

It’s also part of the massive Starfarer-bundle, which you can find here!