Well of the Worm (DCC)

Well of the Worm (DCC) 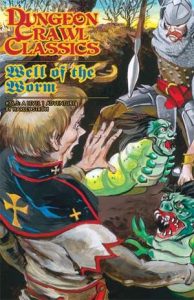 All right, so, this is designated as a level 1 adventure for 4-6 characters, but as a whole, you could conceivably run this as a funnel as well; while there are no specific patron-gaining encounters or the like included, the module’s difficulty is lower than some of the tough funnels out there. As always, a well-rounded group is recommended, but as far as DCC is concerned, this one is less difficult than comparable adventures and doesn’t per se require a specific set-up regarding classes. A pole weapon or means to cause solid ranged damage is surprisingly helpful in this one, in spite of the cramped dungeon.

The module is also pretty straightforward in many ways: We have a straight little dungeon-crawl here, and a very linear one at that – if you want lots of things to fiddle with, you’ll instead find a hack and slash adventure. Theme-wise, this is firmly-rooted in the dark fantasy-genre – the dungeon is very Giger-esque, and there are several thematic allusions to the Alien-franchise. In many ways, this could be played in e.g. Lamentations of the Flame Princess’ default setting without much modification, so the focus here is less on gonzo or sword & sorcery, making this a more “local” feeling module that doesn’t necessarily require much in the way of setting it up.

As always, we do receive some very flavorful read-aloud text, and the module does come with 2 b/w-handouts. The map of the complex is gorgeous, but no player-friendly version is provided.

All right, only judges around? Great! So, the story is pretty simple: A madman called Solom Quor, driven insane by his contact with the Mother of Worms, has, over the years, degenerated into a barely human thing, all while breeding so-called war-worms – essentially worms with human faces, which gestate in humanoids, making acid-barfing war-worm zombies. Those slain by the draining of war-worms risk rising as war-worm zombies. Solom Quor’s plans near fruition, and thus the PCs have to brave the eponymous well and the claustrophobic dungeon it hides to stop the mad wizard.

The module wastes no time in establishing its atmosphere: Burrowed into the mortar of the walls, near mindless war-worms will attempt to drop on the PCs, dying if they miss – this suicidal attack establishes their mindless ferocity, and the first room of the dungeon proper helps this notion further: People glued to the walls with slime, incubating war-worms, are shown as the first handout, and some of the dead have already underwent the war-worm zombie transformation.

Navigating the claustrophobic tunnels, the party will need to brave combat in claustrophobic environments (including the chance to fall into pits full of war worms – hope the party brought sufficient means to pot-shot/pole-arm the trapped war-worms…) and find the horrid shrine of the worm mother (the second handout, btw.): Here, Solom Quor has a nasty ambush waiting, including a means to let rubble fall down via his escape route. The “rocks fall” does not mean that “all die” here, btw. – the cave-in only inflicts a moderate 2d6 damage to those trapped beneath the rocks. I am not happy with the implementation here – PCs “on the heels” of Solom are subjected potentially to the cave-in, but if it’s instantaneous, how does the one save make them get through a 10+-square tunnel? Personally, I think it would have been more prudent to realize the collapse via rubble falling for a round or 2…or1d3 rounds (with chances of being hit/pinned), and then have the entire tunnel collapse. This would have been more cinematic, and it would have been easier on the judge.

Anyhow, Solom, if he got away, will have his last stand with his war-worm queen, and in an adjacent part of the cavern, a blind, berserk war-worm zombie ogre awaits, which will be unleashed if the battle goes poorly for Solom and his queen. This one is easily my favorite monster herein, allowing for e.g. mighty deeds to target the stitching – and, being blind, the un-dead ogre also has another obvious shortcoming, beyond its blind berserker fury.

In case you were wondering, the module does offer random encounters, though these are easily my least favorite part of the module: Apart from the obvious war-worm angle, we also have snakes and vermin, and one type of spider can cause permanent Stamina damage, while a snake can cause death after 1d5 rounds on a failed save. Personally, I like such monsters to have some sort of context, foreshadowing or the like – having the random encounters be potentially more debilitating than the planned encounters is a choice I don’t particularly enjoy seeing.

Editing and formatting are very good on a formal and rules-language level, with no serious complaints on my part. Layout adheres to a one-column b/w-standard with a few b/w-pieces. The handouts are nice, if not necessarily mind-blowing, and the cartography is nice, but lacks player-friendly versions. Still, I do applaud the fact that the module prioritized its art-budget properly and included handouts instead of useless encounter art. The pdf-version has basic bookmarks. I can’t comment on the print version’s merits or lack thereof, since I do not own it.

Harley Stroh’s “Well of the Worm” is a well-executed hack-and-slash adventure; I was particularly intrigued to realize that this wasn’t originally penned for DCC – Daniel J. Bishop converted the module from its original 3.5-version, and did so remarkably well. This very much *feels* like a DCC-adventure. It also does its claustrophobic theme well, and manages to evoke a rather fun atmosphere…but the 3.X-roots do show in the miscellanea. There is a bit less going on beyond combat than I’d have liked to see, and while Daniel J. Bishop did a fantastic job making the combat feel properly DCC-like, beyond that, the module doesn’t have as much going on as I’d have liked to see. This is, in short, a solidly-executed genre-piece. This is NOT, I repeat, NOT, a bad adventure. It is, however, also not necessarily one that will blow your mind. It is evident that the module could have used a few more pages to develop its themes. As a whole, I consider this to be a 3.5 stars-module, and while I wanted to round up, I ultimately felt that the module, ironically, considering its slithering, slimy theme, is a bit too sterile beyond non-combat interactions for rounding up.

Want to see me cover more DCC? I cover what my supporters want to see, so consider leaving a donation, or joining my patreon here.