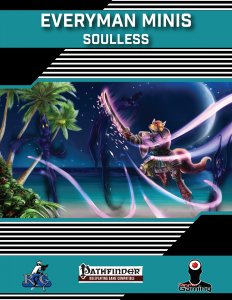 This Everyman Mini clocks in at 7 pages, 1 page front cover, 1 page editorial, 2 pages of SRD, leaving us with 3 pages of content, so let‘s take a look!

So, on the introductory page, we have a brief summary of the triumvirate of body, mind and soul and what they mean. For the purpose of this book, the body is the vessel that contains the mind and soul, acting as the medium by which mind and soul interact; undead result from minds so strong as to animate bodies without a soul. The mind is a waking consciousness, and includes the sense of self, and represents the medium by which mortals make decisions and act upon them; in a way, it is a go-between of body and soul, existing as equal parts physical and metaphysical; destruction can occur metaphysically (though insanity or breaking down of a world-view) or physical (though degenerative brain diseases or damage). Without a mind, a creature lacks a diving force and the creature has no ability to etch emotions into the soul. The soul, finally, is metaphysical, a mortal’s animating force and the part of a mortal being most true to their self. It is a repository for the memories and emotions experienced. Without a body, soul and mind usually pass on to the afterlife. Usually. This little breakdown, with its almost Jungian notions, may be just a column, but it’s one I very much enjoyed seeing here.

Now that we know about the soul, what about the soulless? The first would be a Medium outsider, the incorporeal soulless gloom, which clocks in at CR 3. It can flatten itself as a move action to shadow size, which prevents being targeted as a single creature, but the gloom is also limited to movement. Very cool, and should be the base ability for shadows and similar creatures. The pdf also includes the CR 10 gloomtide, which, in an interesting angle, represents a Gargantuan accumulation of glooms, which gets a swarm attack, but is no swarm – it doesn’t have the immunities or the like – it essentially is a demi-swarm and clearly is intended to work in this strange way. The tide can also hurl components of itself to other places, creating temporary mini-tides. I loved the execution here!

At CR 9, Kyrshin’s soulless take the iconic kitsune mascot and provides a pretty deadly adversary with unchained fighter tricks – include a super-powerful cone-block that negates attack effects in a cone. I love this one, and with the cooldown and the array of Stamina-based tricks, this is a really cool adversary. Did I mention the Whirlwind Attack that also creates sakura/cherry-blossom magic missiles? Very cool!

Soulless is a template that can be added to living creatures with an Intelligence and Charisma score of 3+ that is not an outsider. CR is that of the base creature + its Charisma modifier; +1 if the creature is evil, and extremely evil creatures may increase that by up to +10. For every CR-increase gained this manner, we get +1 racial HD and a custom special attack. Cool! Size is usually akin to the base creature, but good creature’s soulless may be up to 2 size categories smaller, while evil creature’s soulless may be up to two size categories larger, with CR modified by -1/+1 per size category. Creature type changes to outsider and the creature becomes incorporeal and soulless re subtypes. Creatures with strong elemental ties may gain that subtype as well. Soulless can sense nearby souls with a  unique, custom sense, and gain a profane bonus to AC equal to 1 +1 for every 4 BAB the creature has. Beyond being incorporeal, soulless get DR/- equal to the BAB and SR 11 + ½ BAB or CL, whichever is higher. Spellcasting ability adds +2 to the SR. Soulless slaying creatures eligible for the template generate more, and they have the soul armament – a weaponry or spell soul; weaponry mimics natural or manufactured weapons, save that the inflict 1+ ½ the soulless’ CR times d6, with the spell soul instead acting as a SP usable as a ranged or melee touch attack, inflicting the soulless’ CR times d6s. Damage type is contingent on attack/nature of the soulless. The soulless does lose its Intelligence, having no mind – they only have Intelligence 2, which is probably a huge boon for all living…

Editing and formatting on a formal and rules language level are very good. Layout adheres to the series’ two-column full-color standard and the pdf sports a cool artwork in full-color. The pdf has no bookmarks, but needs none at this length.

Alexander Augunas’ soulless are pretty damn cool – if anything, I really wished we got more about the whole body-mind-soul trinity here; the concepts sound plausible and like they very much would offer more options beyond those explored. The soulless template is fun and dangerous, and the pseudo-swarm gloomtide? Really cool angle, making this a quasi-but-not-really swarm. All in all, a great little supplement. 5 stars + seal of approval.

You can get these unique creatures/template as part of the bundle here on OBS!

Missed the cool unchained fighter? You can find it here!