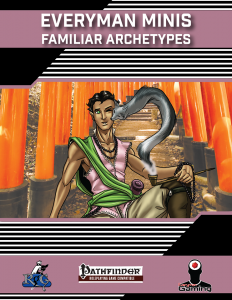 This Mini is exclusively available as part of the Klickstarter-bundle and clocks in at 7 pages, 1 page front cover, 1 page editorial, 2 pages of SRD, leaving us with 3 pages of content, so let’s take a look!

So, first, some rules: Shapechanging familiars must have the same archetype for all forms, and improved familiar abilities don’t stack with those of familiar archetypes that alters or replaces the variable bonus a familiar grants or the ability to speak with animals of its kind.

The pdf contains 8 familiar archetypes: The figurine familiar replaces emphatic bond with the change shape universal monster ability and the familiar may assume the form of a stone figurine that fits into the master’s palm, which means they cease to detect as alive. While in figurine form, the familiar can sense the master’s emotional state while on their person. Harbingers of fate grant the master Improved Initiative and get speak with master at 1st level, replacing Alertness. The familiar can cast augury (not italicized properly) ½ master’s level times per week as a SP, replacing empathic link and deliver touch spells. This obviously is to make up for the power-increase granted by Improved Initiative. Share spells is relegated to 5th level and 13th level allows for four augury uses to instead use divination. Spell-references, once more, not italicized properly. This replaces scry on familiar.

The jinx has the master’s class level ranks in Acrobatics, and gains its level as a competence bonus to move through an opponent’s threatened area or through their space. They also get a +4 dodge bonus to AC and CMD versus AoOs. This replaces share spells. At third level, an when a jinx is in an opponent’s threatened area, they suffer a -1 penalty to ability checks, attack rolls, saving throws and skill checks, while the master gains a luck bonus to one of these check types. If the jinx is in the target’s space, the jinx can force a reroll of such a check as an immediate action, forcing the foe to take the new result. This replaces share spells. So, the massive defense boost is there to make buzzing around in dangerous areas more viable. Wouldn’t recommend this for witch familiars, but an interesting option. Spell eaters lose deliver touch spells and scry familiar in favor of making natural attacks count as dispelling. Additionally, 1/day, the familiar may store a dispel magic spell inside, applying enhancement bonuses to natural attacks, if any, to dispel checks. 11th level allows for the use of this as a SP, and 13th level upgrades dispelling to dispelling burst (oddly, both not properly italicized), and both greater dispel magic and dispel magic stored can be cast as SPs. Both spell references are not in italics. Speaking with animals is replaced at 7th level with the chance to store spells dispelled, provided the check beats the DC by 5 or more, as though the familiar were spell storing and then cast it as an SP. The spell must be 3rd level or lower, and 9th level and every 2 levels thereafter increase the maximum spell level by 1, capping at 6th spell level. This one would be a bit easier to grasp in its functionality if its formatting was concisely implemented. That being said, it is an interesting twist!

Steed nets the familiar change shape with a form identical to the base form, save that it’s one size category larger than the master. Ability score, size bonuses, skill bonuses and weapon damage are NOT adjusted, though carrying capacity is. This replaces Alertness. I like this. I assume special size modifiers also are not applied? The Traveler archetype loses improved evasion in lieu of a pocket dimension accessible via plane shift, usable 2/day to its own cozy dimension. One reference of the spell is missing the formatting. Fresh food and water exist inside the dimension, but are not codified – could the familiar bring e.g. infinite food out of the dimension? Deliver touch spells is replaces with the dimensional slide arcanist exploit, with arcanist level equal to master level, and the familiar counts as having an arcane reservoir with 3 points, which increase by 1 point at 3rd level and every 2 levels thereafter. 7th level allows for the expenditure of one point from this reservoir to use jester’s jaunt as a SP, replacing the speak with animal ability. 13th level allows for the use of 4 arcane reservoir to cast dimension door as a SP, replacing scry on familiar. The spell reference is not in italics.

Tutelary familiars may only be familiars that contain their master’s spells, such as the familiar of a witch or shaman. Instead of Alertness, we have the ability to speak and understand all languages the master knows, +1 for every 2 levels beyond 1st. They also increase aid another’s bonus to assist the master to +3. Instead of share spells, the tutelary familiar can 1/day teach a spell to the master as a standard action. The master must be within 30 ft. and able to hear the familiar. On their next turn, the master may swap one prepared spell for a different spell of the same spell level that the familiar knows. If the master has an open, empty spell slot, they instead can immediately prepare the spell.

Ward familiars gain 2 + Intelligence bonus times the master’s level skill ranks. Minor nitpick: It’s obvious from context that the “2” should be multiplied along, but following regular math syntax, this would RAW not be the case. The ward familiar gains class skills, armor and weapon proficiencies of the master’s familiar-granting class. If the familiar was gained from non-class source, 8 skills of the familiar’s choice are class skills, and it gains proficiency with light armor, shields and simple weapons. This replace the ability to share the master’s skill ranks, Intelligence increase and empathic links. The ward’s base form is that of a humanoid creature of a specific age and race, with ability scores generated as though a PC with a 10-pt.-buy. The ward gets +2 to an ability score at 4th level and every 4 levels thereafter, and the wards gains all racial traits of the race and change shape, which allows the ward to transform into a specific Small or smaller animal suitable for serving as a familiar, and in this form, the master gains the associated familiar boons, and also the natural AC bonus. This replaces Alertness and speak with master. At 7th level, the familiar gains the simple class template (once erroneously called “simple class graft”); for the purpose of these, the familiar is treated as 1 HD until 11th level, where this suddenly increases to 6 HD, and further increases by 1 HD for every 2 levels of the master. This replaces speak with animals, spell resistance and scry on familiar.

It should be noted that plenty of classes are NOT covered by the standard simple class template array – if you need them all, you’ll probably require The Genius Guide to Simple Class Templates for Monsters.

Editing is very good on a rules-language level; on a formal level, there are a couple of typos, and particularly formatting issues abound, with a LOT of hiccups, ranging from template/graft to missed italics. Layout adheres to the series’ two-column full-color standard, and the pdf comes with a great full-color artwork. That cuddling pipefox? I so want one. *Endy has stars in the eyes* The pdf has no bookmarks, but needs none at this length.

David N. Ross delivers a solid array of familiar archetypes that change the functionality of familiar options for the better. I genuinely love how diverse these are. A couple of these options do seem to be pretty potent, but ultimately, since familiars are a precious commodity, they are kept in check by the dangers of losing them. Mechanically, I really like this one, and as a person, this is a pdf I very much enjoyed. As a reviewer, however, the formal glitches do accumulate, and as such, my final verdict can’t exceed 3.5 stars, though, as a private person, because the concept and implementation is awesome, I round up. That being said, if you are particular about a book’s formatting, you should probably consider this to be a 3-stars file. My official reviewer’s rating, alas, can’t round up from 3.5 stars – there are simply too many of these formatting glitches here.

You can get these familiar archetypes as part of the bundle here!

Missed the excellent Genius Guide to Simple Class Templates for Monsters? You can find it here!