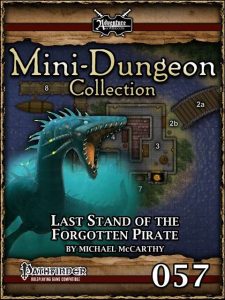 The PCs are asked by an druid to check up on a former orc pirate, old Gnarltooth, who has been pretty evasive about some obligations, consumed by his obsession with “The Beast”, an awakened elasmosaurus, which is lurking nearby, as he has had the beast magically bound. The pdf depicts his little island home – the orc is obviously afraid to face-down the creature. The mundane nature of the orc’s life is depicted and provides quite a few options to engage in meaningful roleplaying…but ultimately, the PCs will have to enforce, finally, a confrontation…but they’ll need to help…or the battle will be rather short…

Editing and formatting are very good, I noticed no significant glitches. Layout adheres to a beautiful 2-column full-color standard and the pdf comes sans bookmarks, but needs none at this length. Cartography is full color and surprisingly good for such an inexpensive pdf. This time around, we get not jpgs or player-friendly versions, which is a down-side.

Michael McCarthy’s little character study/variant of the Moby Dick trope is a compelling, fun sidetrek that can provide some interesting questions to ponder, an intriguing ally to potentially recruit. In short: This is well worth the fair asking price and also presents a nice, idyllic potential home for the PCs…at least for a while. 5 stars.

While my review is based on the PFRPG version, you can also get this mini-dungeon for 5e here!