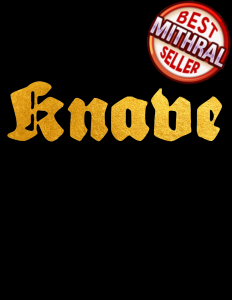 This game clocks in at 7 pages, laid out in a horizontal 3-column style that crams a lot of information on each page.

So, what is Knave? It is essentially a very  rules-lite toolkit that is designed for general compatibility with OSR-games; the first column of the first page makes the basic design-tenets of the game pretty clear, and character creation is a straightforward manner.

Knave knows the classic 6 ability score, each of which has two related values, a more complex approach than what some games offer: These would be the defense, and the bonus. For each ability score, you roll 3d6. The lowest value you roll is the ability’s bonus. To determine the ability defense, you take the lowest roll and add 10 to it. Say, you rolled 1, 6, 5, then you only have an ability bonus of +1, and an ability defense of 11. You get to switch 2 ability scores after rolling the dice.

…No, I did not fail to mention something. In a somewhat odd deviation from the standard, Wisdom is the governing ability score for ranged attacks, and it deals with perception and intuition. Charisma deals with persuasion, intimidation, etc., and Charisma bonus caps the number of henchmen at a point.

Saving throws are based on ability scores: To make a save, you add the ability bonus to a d20, and compare the value with 15 – on a value GREATER than 15, you succeed. If the save is opposed by another character, the difficulty of the save is instead the enemy’s defense score. As usual by now, there is an advantage and disadvantage option to modify results. Roll 2d20, take the better, or worse, respectively. Advantage and disadvantage also apply in combat.

A PC starts with 2 days of rations and a weapon of the player’s choice, and you get to roll on the starting gear tables. PCs have a number of item slots equal to the Constitution defense. Most items take up one slot, but some take up more. Armor has a defense value, and it has a defense value of its defense minus 10. An unarmored PC has an armor defense of 11, and an armor bonus of +1.

Knave has no classes, so you roll 1d8 for starting and maximum hit points. A PC’s “healing rate” (per rest – this is explained later in the pdf) is 1d8 + Constitution bonus. Exploration speed default is 120 ft., combat standard speed is 40 ft. Then you add fluff, et voilà. Done.

Reactions are rolled with 2d6, and we have the 5 classic attitudes (hostile -> Helpful); creature morale is usually between 5 and 9, and rolled with 2d6: On a roll greater than morale, the monster tries to flee. Hirelings are also subject to morale rolls.

Initiative is determined with a single d6 roll: On 1-3, all enemies act first, on 4-6, all PCs act first; this is rerolled every round. Each round, a character can move their combat speed, and take one combat action. To make an attack, you roll d20 and add either Strength bonus (melee) or Wisdom bonus (ranged) and compare that with defender’s armor defense. If the roll is greater, the attack hits. The game notes an alternative, where the defender gets to roll a d20 and add armor bonus, making that part a contested roll (opposed roll, in the system’s parlance). These opposed rolls are also used for stunts, such as disarming, doing extravagant stuff, etc.

On a successful hit, you roll weapon damage. If your weapon is suited for the enemy (such as attacking a skeleton with bludgeoning weaponry), you get an additional damage die. On HP 0, you’re unconscious; on -1 HP, you’re dead. I noticed advantage in combat before – when you have that, you can gain the standard benefit, or make an attack AND a stun attempt.

PCs gain a level at 1000 XP, and suggested standard values for XP awarded are provided. Upon attaining a level, the PC gets to roll their new level in d8s; if the result is less than the previous maximum, the old maximum increases by 1 instead; otherwise, the new roll is the new maximum hp. Additionally, defense and bonus of 3 ability scores of their choice are increased by 1. Abilities cap at 20/+10.

The character generation also includes a whole page of dressing and starting gear: These mostly are 20-entry tables with one-word tidbits: Physique, face, skin, hair, clothing, virtue, vice, speech, background, misfortunes. Alignment follows the single-axis paradigm, and the starting gear tables do their job. Another page deals with equipment and uses slots and quality as pretty nice limitations. The default currency is copper, but that’s easy enough to alter, should you so choose.

Okay, re magic: In Knave, you can only cast spells of your level or less, and spells are cast out of spellbooks, which must be held in both hands, the spell read aloud. Each spell book can only be used 1/day, and each spellbook holds only a single spell, and thus takes up an item slot. This is the option that maintains compatibility with the standard 9-level spellcasting of most OSR games. An odd choice here is that all spells, be they a level 9 spell or a level 1 spell, take up the same spellbook; it rubs me the wrong way, but I get it – it’s a conscious choice for the sake of keeping the slot system simple. Spell books may not eb copied, transcribed, etc. – like in DCC, the only option here is to quest for it. Quick conversion guidelines for most monsters are provided.

The remainder of the pdf, is, somewhat to my chagrin, made up of 100 level-less spells; these last for caster’s level x 10 minutes if ongoing, and when referencing item, they mean hand-held ones; when mentioning objects, these may be up to human size. Successful saves negate their effects. Now, I do enjoy level-less spells, and I’m particularly fond of “Wonder & Wickedness” by Lost Pages, but the framework provided for the spells here is a but too basic for me. To give you an example: “Time in a 40ft bubble slows to 10%.” Okay, love the idea; getting some concrete rules for this would be even cooler. As written, most GMs will have a hard time improvising how this works in combat.

Or Spellseize: “Cast this as a reaction to another spell going off to make a temporary copy of it that you can cast at any time before the spell ends.” It doesn’t take a genius to note that the game usually has no reaction, so the timeframe when you can cast this is opaque at best (next round? Turn? Out of initiative order?). And don’t start with that “rulings, not rules”-nonsense-excuse often fielded for wonky design; Knave generally is very precise, and the spell literally needs one word to be precise, and the majority of rules language herein is very much precise. As a whole, the level-less spells are easily the weakest part of this system.

Editing is very good on a formal level; on a rules-language level, there are a few minor nitpicks to be noted, but as a whole, can be commended. Layout adheres to a no-frills three-column b/w-standard, and the game comes with a character sheet pdf and with a docx-version to encourage you to hack the system – kudos for the latter in particular. The pdf has no bookmarks, but needs none at this length.

Ben Milton’s Knave is a skeletal take on a rules lite system that can be used with relatively few tweaks with most OSR-games. While it looks pretty unimpressive on paper and doesn’t reinvent the wheel, it plays rather well indeed.

As a private person, I did not like this game. I am not a fan of the swingy results of opposed rolls. I do not like that only the worst roll in character creation really matters. I don’t like that almost all character progression is gear game, and that Constitution is easily the most important ability score; why Strength can’t be used to determine slots RAW is beyond me. I don’t like that Wisdom is the ability score for ranged combat, even though I get the design decision that required this change in the simplified system presented. As a whole, there are many design decisions here that do exactly what they are supposed to do, but that rub me the wrong way. There are no real tactics in combat or serious character growth (as opposed to gear growth) that are the result of this system; what’s here is here in spite of it, imported via e.g. spells from other rules-systems. By design, mind you. The game notes no magic item guidance in its content, and e.g. a handy haversack or similar item imported to the system wrecks the slot-balancing. How would magic swords and their bonuses interact with the attacks? Some guidance for adapting magic items would have been nice.

I totally get why so many adore this game. It is precise (for the most part), inexpensive, and presented in a succinct and concise manner.

The designer’s guidelines throughout do a good job explaining design decisions to laymen.

As a reviewer, the one thing that’s missing from this is…a reason to play this particular game. Unlike other ultra rules-lite games like Into the Odd, there is, by design, no implicit setting, nothing unique like Arcana that would drag me; there is no focus on special weaponry, magics, etc. – because it aims to be a generally-applicable rules system that can be used with all OSR games – its biggest strength and biggest weakness.

For me, as a person, I probably won’t touch this game again; It’s fun enough to play, but I, as a person, either look for something rules-lite and distinct, with a strong theme and focus for shorter games, or something with more serious differentiation options for longer ones. For me, as a private person, my very subjective internal rating for this would be 2 stars, won’t play again.

My criticisms and personal dislikes aside, this *IS* a good game! It can be fun to play, and just because it’s not for me doesn’t make it bad, and I’d be unfair to bash this game for things that might well be features for you, even though they don’t work for me. Even though this may not be for me, I do hope this game thrives for what it does.

As a reviewer, I consider this to be a 4-star file; it leaves a few things open and could use a few unique selling propositions to set it apart, but if you’re looking for a minimalist, class-less OSR-compatible game that focuses on gear, then this delivers big time.