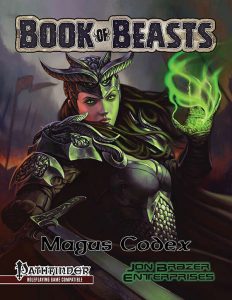 The second pdf in the series of NPC Codex books released under the Book of Beasts-line clocks in at 26 pages, 1 page front cover, 1 page editorial, 2 pages of advertisement, 2 pages of SRD, 1 page back cover, leaving us with 19 pages of content, so let’s take a look!

Okay, in case you didn’t know, the presence of the word “Codex” in the title implies that this book focuses on crunch and statblocks, though, unlike most such supplements, the statblocks provided here, more often than not, actually do come with a bit of flavor, offering notes for a sample NPC, and where sensible, some brief notes on the NPC in a combat encounter or even some roleplaying tips regarding the NPC in question. Nice.

The book contains one magus-build for every single level, ranging from level 1 to level 20. The builds for level 2, 3, 4, 11, 13, and 16 are the statblocks that do not come with the flavor information for a specific NPC, in case you were wondering. The builds do offer tactical notes for running them before and during combat, and where applicable, base statistics are provided. Spellbooks are also noted in the gear where applicable for non-spontaneous magi – if you’re like me and loathe fleshing these out, that’s a big plus.

Now, as for the builds, we might begin with al elven magus at level 1, but after that, the builds quickly go more unconventional routes regarding the combination of classes and races, and the individual builds. The level 2 magus, for example, would be an oread shock trooper for the shaitan armies. There are no “statted up” builds herein, by the way – each level gets its very own build, no easy progressions of one build provided for several levels, as one often gets to see in codices.

The versatility of the builds is pretty interesting: At level 3, we for example get a hobgoblin that is supremely maneuverable and good at getting into melee, but not as good at getting out of it, as the build has no Acrobatics – an intended choice to make these raiders feel like a hard-hitter and not a guerilla fighter. The gnomish wild skirmisher is a different take on the concept, an eldritch scion’d magus with clever bloodline powers working in tandem to offset the less impressive base damage this one offers. It’s more trick-based, as befitting of the theme – though I probably wouldn’t have called the build skirmisher.

The elf-raised half-elf moon knight does the whole elvish knight angle well, with the sample NPC never managing to meet his elven sire’s approval. What about a goblin with a really fiery build? Blargg Firespitter as the sample flavor works as an adventurer-exterminator for a dragon, by the way. Love that concept!

The level 7 back alley avenger Lauren Nightfire made me flash back to Arrow; short of a vigilante-dip, this is pretty close to what you’d expect, with slow, alter self, web etc. giving off a low-key magic vigilante style, supported by excellent Ride and Stealth skills. For a more classic blade dancer-ish build, the Aerobatic spellsword (spell dancer level 8) is a classic agile, skirmishing high-threat-range build. The tiefling helltouched archer instead presents a ranged combat-centric magus build.

The wyvaran build at level 10 focuses on aerial assaults supported by spells, while the level 11 weaponbreaker combines high-crit with, well, you guessed it, sunder. The hailstorm harrier staff magus is pretty disruptive and also based on aerial superiority  (and has a minor typo in the tactics section – “spellcasting” instead of “spellcaster”). The dagger-throwing ratfolk magus with its skirmishing tricks is pretty interesting, the NPC information hinting at the local Ratfolk Collective, which is an angle that makes sense for them. Nice!

Beyond that, we have a powerful level 14 hexcrafter as the final archetype’d build; levels 15-20 are all straight magus builds, though the focuses range from samsaran scholar and a halfling magus by class, burglar by trade to the classic retired adventurer, an ifrit general, a wyrwood elder, and finally a dwarven dealmaker with the forces infernal at level 20 – in case you’re using AAW Games’ gitwerc, this one is a great addition as a mighty ally to the agents of HEL. Just sayin’…

Editing and formatting on a formal and rules-language level are both rather impressive; while a few formal hiccups may be found, none of them compromise the builds in a significant manner. Formatting is generally just as tight: Italics are where they should be, and the same goes for bold components. Nice. Layout adheres to a two-column full-color standard with a black border on one side; it looks elegant and distinct. Artworks are full-color pieces and well-chosen, though they will be familiar to most 3pp-fans out there. The pdf comes fully bookmarked for your convenience.

Dale C. McCoy, Jr. delivers a series of unique, well-wrought builds with some cool character nuggets thrown in. The builds are distinct enough to feel as though they have organically grown. Want 20 distinct magi? For a super-fair price point? Then get this pdf. The bang-for-buck ratio is very strong here, and the fact that we get distinct builds for every level, instead of just progressions, is the icing on the cake. Inexpensive, convenient, cool – 5 stars + seal of approval. If you need some neat magi, grab this.

You can get these magi here on OBS!

If you enjoy my reviews, please consider leaving a direct donation, or joining my patreon here.