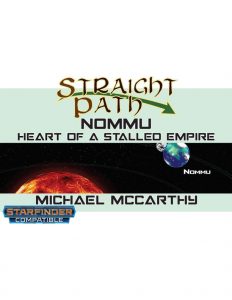 This supplement clocks in at 40 pages, 1 page front cover, 1 page editorial, 1 page ToC, 2 pages of SRD, leaving us with 35 pages of content, laid out in a horizontal manner that is obviously intended for use with e-readers. The supplement comes with two jpegs – one depicting the G’Non system, and one being the world map of Nommu – both don’t have a scale.

In case you were wondering – this is the home world of the Nomi, introduced in the supplement depicting the roving city station Orbi, and their racial stats are provided: +2 Charisma and Intelligence, -2 Strength, 3 HP, Small. They gain Skill Focus and 1/day may reassign it. They also get +2 to checks made with tools and to make use of unknown technology. Most interestingly, they have two arms, two legs, and two limbs that can be used as either, which can either allow them to wield more weapons or increase their speed. The write-up includes notes on playing nomi, height, weight, etc. Nice!

There is also a variant that instead gets +2 Intelligence and Wisdom,+4 for aid another, and the 1/day ability to spend Resolve (not capitalized properly), and if you do, you recall knowledge as though you rolled a 20 to represent your planning. Alternatively, you can retroactively have bought and paid for an item of a light bulk, up to an item level equal to your character level. These retain the versatile limbs. There are also 4 traits for the nomu, which struck me as odd, since traits are not a thing in SFRPG – shouldn’t these be instead statted like, I don’t know, themes?

Anyhow, Nomu is a per se utopian world, but also one steeped in inequality (topical…) – the differences in tech might well be centuries between cities, with the NEW (Nomi World Empire) as a planet-wide coalition behind colonizing efforts of other worlds – because the inequality is erupting. For centuries, there had been no wars, but now, border conflicts are slowly escalating, all while invasive species threaten delicate ecosystems, and the resources of the planet are dwindling. Revolution is coming a-knocking, but will it be soon enough?

The pdf then proceeds to cover the planets of the  G’Non system, from the star to the scorched, rocky plains of Ishini, icy Safura and Nommu’s moon Lot, we have a couple of nice angles before diving into the planet’s history. After a brief primer on the culture of the Nomi, we proceed to cover the places to explore on the planet, covering the various nations and unclaimed lands. The NEW is theoretically a council of 30, but de facto is led by 4 entities (including a LG self-aware tier 10 computer technomancer – awesome), though we do not get stats for these movers and shakers. The pdf then proceeds to explain the planet’s military, as well as the pantheon of the aliens’ deities, snarkily titled “Technically not incest.” This irreverent tone surfaces time and again.

The pdf also includes new critters, like the Hearthforged Robot (CR 11), a tech-insect with cutting lasers for hands. There are some errors in the stats, both in EAC , damage type missing, etc. We also get a CR 8 soldier of ideals operative, and a pretty cool CR 4 buzzbird, basically a kolibri-like apex predator. The builds also share these issues. Cool: We get a tier 3 treeborg living computer, including an expansion bay version.

Editing and formatting are good on a formal and rules-language level. Layout adheres to a two-column horizontal standard best suited for e-readers. The background is blue, with most of the text yellow, so printing this will take serious ink/toner. Cartography is full-color and solid. The pdf comes fully bookmarked for your convenience.

Michael McCarthy delivers a fun little world, and considering he did EVERYTHING here, an impressive and inexpensive little booklet. This may not be perfect, but for 2 bucks? Worth taking a look at. My final verdict will clock in at 3.5 stars, rounded up due to the good bang-for-buck ratio.

Missed Orbi? You can find the Roving City-Station here!