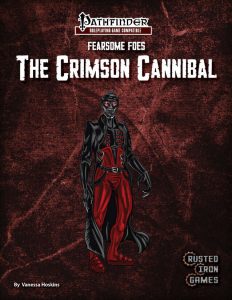 At one point, Hugo Perkins was just a scoundrel, a criminal – a successful one, granted, but also one that engaged in serious spending…live in the moment. At one point, however, his fellow criminals sold him out, finally tired of his badly-conceived schemes. Unfortunately, the jailer of the gaol was the brother of a woman left with a bastard conceived by Hugo. He set him and two other prisoners up, hoping they’d kill Hugo, but the scoundrel managed to manipulate his fellow prisoners into killing each other. After the plan had backfired, the jailer instead went the oubliette route, and let Hugo starve to death. The criminal, having previously partaken of the corpses of his fellow inmates, turned ghoul, ripped the jailer to shreds, and escaped. It took some time for him to realize what he had become, and the fugitive ghoul has decided that it’d be payback time now.

For a few months now, he has become the latest serial killer, dubbed the Crimson Cannibal. Investigator Marcy Salund (CR 7 inspired blade/empiricist, comes with kickass b/w artwork, full stats) has been put on the case – the lady btw. also comes with the investigator’s glass item, which allows for the prolonging of inspiration bonuses on Perception – cool!

Speaking of “cool” – the pdf comes with extensive, interesting adventure hooks: From a PC’s relative being killed to being directly targeted, missing McGuffins and blocked areas, there are several interesting angles here, and all of them are more detailed than usual – these general themes may not sound new, but they are depicted in more detail than usual. Particularly cool: The supplement offers essentially a sketch of running a murder investigation, including sample DCs and various types of physical evidence and the skills that can help you discern more information about them. This attention to detail also extends to questioning eye-witnesses and rumors, and for examining corpses, finding the safehouse and the secret identity of the perpetrator, for the crimson cannibal is a CR 8 ghoul vigilante with the stalker specialization. The build is neat, and also includes the sprinter’s slippers, a type of shoe that allows for bursts of serious speed, enhancing the chances of the crimson cannibal getting away.

Finally, the supplement features 5 different sample encounters, with total CRs for them noted, further facilitating the use of the content herein.

Editing and formatting re very good on a formal and rules-language level. Layout adheres to the series’ two-column full-color standard, and we get a nice original full-color artwork for the antagonist, and an original b/w-piece for the lady investigator. Kudos: In spite of the brevity, the pdf comes fully bookmarked, making navigation simple and easy.

Vanessa Hoskins kicks serious behind with this supplement – I expected an antagonist with a neat background, and got that AND a cool ally for the PCs, AND essentially all the things you need to spontaneously develop this into a fully realized little investigation. Awesome. Combine that with the low price, and we have a winner. 5 stars + seal of approval.

You can get this cool little investigation with its characters here on OBS!