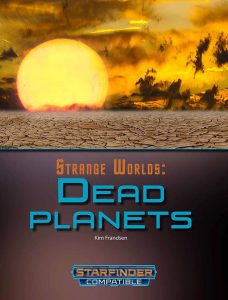 This installment of the Strange Worlds-series clocks in at 16 pages, 1 page front cover, 1 page editorial, 1 page ToC, 1 page SRD, 1 page advertisement, leaving us with 11 pages of content, so let’s take a look!

So, dead planets are not unified in biome, and are defined by an inability to contain sentient life; as such, the usual terrain concerns are potentially varied; much like the first installment, the pdf does feature the wind force table and collects relevant information and expands upon it. The temperature table is not included. Wind force is given in mph, as per the core rulebook; I think that, particularly for a reference pdf like this one, getting the values for the metric system as well would have been awesome, but that may just be me.

The pdf then proceeds to explain the airless world – cool here: The pdf does not forget about the absence of sound. The pdf then recaps the radiation rules for your convenience. The artificial haven would be next, including a CR 10 hazard – Law O: Overriden[sic!] (should have two “d”s) is a phenomenon where robotic life has taken to extermination – with concealed nanite infections concealed in certain areas. The pdf then proceeds to codify equipment frizzes, which employ the proper item level rules to determine DCs to get them up and running again. The pdf provides terrain features for crumbling ruins. Ancient tech malfunctioning is nice: We get a table ranging from CR 1/3 to 20, with save DCs and suggested damage noted. Rules for debris falling from ruins/buildings may also be found.

On former war worlds, we can find defensive lines terrain, horrible corpse stench (CR 4)…and what about minefields? And yes, there are rules to set mines and defuse them. Worlds haunted by necromantic catastrophes might feature e.g. the CR 7 blood boil hazard, which is a kind of proximity-trigger swamp gas carrying a disease that can make you an embalmed. What’s that? A new undead that clocks in at CR 2, using the combatant array. These get additional cold damage, noxious vomit and are pretty neat – minor nitpick: The defensive ability line is missing the unliving quality.

The Bloodshade (CR 20) is also missing the unliving quality; this deadly fellow with its cold aura and ability to freeze targets and execute deadly blood breath blasts is otherwise well-crafted, though the “life drain” ability is noted as “lifedrain” instead. Nitpickery, I know. Living holograms clock in at CR 5, and use the spellcaster array. The construct graft has been properly applied for the most part; unliving is missing, and the subtype is (technological), not (mechanical), but that is once more cosmetics. These holograms have 2 Resole Points and can use them to hijack armor, tech devices, etc. – an ability that deviates from standard verbiage slightly. This would per se not be bad, but the lack of a range for it is jarring. Cool, on the other hand: Short-range teleportation in the hologram’s habitat – where the hardware supports it. Finally, we have a CR 10 overseer robot using the expert array (again, wrong name for the subtype, unliving missing). They have a staggering gaze, regenerate near metal, and are a potent foe – however, the construct graft has not been properly implemented.

Editing and formatting are good on a formal level; on a rules-language level, the statblocks have a few cosmetic hiccups, as well as a couple of hiccups that unfortunately influence mechanic integrity of the material. Layout adheres to the series’ two-column full-color standard, and we get nice full-color artworks here. The pdf comes fully bookmarked for your convenience.

Kim Frandsen’s little pdf on dead planets starts off very strong – the whole hazard array is rather cool, and I genuinely would have loved to see more; the monsters, in comparison, fall behind that coolness: Only the living hologram really got me fired up, with the other monsters being less interesting. As a whole, I wished this had focused more on the planets, and less on the creatures. However, it should be noted that this pdf only costs 2 bucks, and I genuinely believe that the hazards and materials there make this worth getting. My final verdict will hence clock in at 3.5 stars, rounded up due to the low price point.

You can get this booklet for the low price of a single buck (!!) here on OBS!