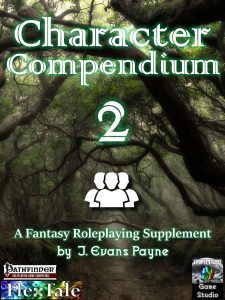 This huge book clocks in at 439 pages regarding its content – already excluding editorial, KS-thanks and the like, as well as excluding the usual introduction for Infinium Game Studios book that explains the FlexTale angle, quadded statblocks, and the like. For the purpose of this book, most of these are inconsequential, since this is all about pregenerated characters.

This book was moved up in my reviewing queue due to me receiving the hardcover for the purposes of this review. My review is thus based on the print-version of this tome.

This tome is intended for the purpose of providing replacement/pregenerated characters, to be more precise, for the second tome of the massive saga “The Mondarian Elelctive.” And yes, review forthcoming. Quadded statblocks are relevant, though, so let’s talk about those – each character herein comes in 4 iterations – one for level 1, one for level 6, one for level 10, and finally, a level 14 iteration. If applicable, familiars or animal companions are provided as well.  At the start of each sub-chapter of the book, we have a summary of class roles, explaining for example how important skills, armor, ability scores are and ideas to use the characters – particularly useful here are the “resist the urge to”-components. While I do not agree with all of these notions, these intros can be useful to the newer players in particular. Each of the sub-chapters also sports notes on designer’s soapboxes, which range in their applicability from sound advice to…less so.  In the latter case, this stems from multiple character classes being lumped in one chapter. When e.g. the designer comments that paladins and rangers won’t out-DPS most fighters, I had a tired chuckle. Similarly, paladins and rangers have VERY different roles, with many rangers acting as half rogue-substitutes in my experience…but oh well. As a whole, these introductory paragraphs are useful.

The characters contained herein are presented mostly in a NPC Codex-style format, so they are e.g., to take the sole bard herein, the dervish dancer. No individual background story or the like are presented, which was somewhat lamentable, as the genuinely often intriguing character backgrounds were what made the villainous compendium at least somewhat work for me.

If you’re playing with different point-buys, you should be aware that no point-buy-scaling guidelines are provided, nor is ever explicitly pointed out which guideline is presented, which is kinda odd, considering Aquilae’s somewhat dark fantasy-ish, grittier tone. Favored class options have been applied, but as far as I could discern, are used for HP/skills, not for race-specific options. The use of favored class options for a reason is not explicitly called out in the book.

As far as class-dispersal is concerned, the book contains the following builds, as noted before, with each build featuring 4 iterations:

-3 cavaliers (in the rogue chapter)

…and there are a couple of druids. By far the largest chapter herein deals with druids. It’s 177 pages of the book, so if you’re not looking for druids, you’ll have less of a reason to get this. There are 29 druid-builds herein. It should be noted that the side of the book has colored markers that let you quickly skim to the respective chapters – since some chapters contain a variety of different classes, the direct utility of this feature is slightly diminished, but I still like this aspect of the physical book.

The respective builds have their class features cut copy pasted in the back, for easy reference, and same goes for less common feat-choices. Verbiage conventions have not necessarily been adjusted, but e.g. animal tricks for companions have been included, which is nice. Less nice: There are problems in some statblocks. Take the alchemist-build, the final build herein: The statblock lists 1d6+4 (+5 for final version) bomb damage, which is obviously incorrect; the class feature lists the additional damage the bomb is supposed to cause correctly, but only for the highest level statblock; this also violates how bombs are noted in pretty much any alchemist statblock ever. This is particularly weird, since the Infinium Game Studios stats are usually good about stuff that can be automated – take e.g. channel energy, which is correctly listed. To avoid giving the false impression: The book is pretty good at getting the formal stat criteria right – better, in fact, than many comparable books. The book lists background skills like Artistry, and not only lists the “big” skills, also noting e.g. penalized skills.

As far as the build quality is concerned, we have a step forward in comparison with the last pregenerated character book by Infinium Game Studios that I’ve covered; the builds are all capable of filling their role, so no over-encumbered monks or the like.

Role…well, this is a weird thing, one of the weirder aspects of the book: I have a hard time determining what exactly this is supposed to be, which is relevant for a fair rating. Are these supposed to be pregenerated PCs, or NPCs? There’s a difference in WBL guidelines etc. there.

The chapter headers don’t help either; they  are called “archetypes”, because the NPCs sport somewhat archetypical functions, but “Archetype” in the context of PFRPG has a very specific meaning.  I did check the equipment loadout of the characters versus the WBL-guidelines, and noticed some discrepancies – which brings me to an important note: While I am firmly opposed to PFRPG1’s Christmas Tree syndrome, favoring scaling magic items and ability progressions instead, the items for the characters herein tend to fall on the basic side of things – usually, they are restricted to a weapon, an armor, a shield where applicable, and sometimes an amulet or the like. If you’re experienced with PFRPG, you’ll notice that, at the very least in the highest-level iteration, this’ll make the builds fall apart. Take a roof runner rogue: +1 Will save, +3 Fort-save, AC 19, 42 HP, at 6th level. This fellow would DIE in my game. Quickly. One of my current game’s level 2 rogue characters has that AC and better saves, and a vastly superior DPR. Not even kidding. If your game is close in optimization thresholds to mine, then these builds will not qualify for PCs. For nameless NPCs, okay…but I wouldn’t use them for bosses or adversaries.

There is a reason for the stark limitation of the magic items, and of the classes covered – the book only takes components of PFRPG prior to the release of the ACG into account. Now, my hatred for the Advanced Class Guide is well-documented, and I barely quit the game over it, but after that book, we got arguably the best two crunch hardcovers since the Advanced Player’s Guide, namely Occult Adventures and Ultimate Intrigue. Their absence is keenly felt when confronted with a book that does not take them into account. For some groups, those focusing on the old PFRPG-material, this might be a feature, but for me, it’s a bug.

Speaking of bugs: Some of the builds have obvious discrepancies between their concepts and execution – take, for example, the poisoner rogue. Guess which build owns NOT A SINGLE dose of poison. Bingo. The frickin’ poisoner. I mean, I like the blowgun and all, but…well. You get the idea. The infiltrator ranger never gets above Disguise -2.  The Freebooter has Acrobatics +1, which’d make them fall all the time on deck, and Swim clocks in at a mighty +5 at 10th level. Yes, I know, historically, many people in the seafaring professions couldn’t swim. But in PFRPG, that kind of skill-allocation is begging for a mercy-killing. If anything, this is one of the biggest strikes against this book.

The tome states that it believes that character can be created from crunch, that rules can spawn roleplay. I wholeheartedly concur. But in the case of this book, the rules often get in the way of the story. And at this point in time, the book needed to evolve further from its troubled predecessor. It didn’t.

Editing and formatting, per se, are much better than what you’d expect from a one-man outfit in a formal manner; once you dive a bit deeper, you’ll notice issues not necessarily springing from the pure numbers generated, but from playing conventions and how things are done in play; paradoxically, the per se valid output generated does not survive the vagaries of the game as well as it should. Layout adheres, as always, the two-column full-color standard of these books, with color-coded headers helping orientation in the quadded statblocks, and helpful icons providing further guidance. As noted before, the colored indicators on the side of the book make jumping to sub-chapters easier – I like those. The hardcover properly notes its title etc. on its massive spine. There is one NPC, the alchemist Gloomy, who has a name, and a full-color artwork.

The predecessor of this book for Dark Obelisk I was easily the weakest book in the whole array, and unfortunately, the same needs to be said about this tome and how it relates to Dark Obelisk II: The Mondarian Elective. J. Evans Payne has crafted a decent array of statblocks if you need some quick stats for disposable, nameless NPCs, but I wouldn’t use these for PCs – ever. As a pregen book, this is a failure. If rated as an NPC Codex, I frankly don’t understand why automatic bonus progression wasn’t used – I can get behind the notion of not wanting NPCs studded with a ton of magic items, but as provided, these NPCs can’t hold a candle to all PFRPG groups I am aware of.

Had this been released anno APG, back when PFRPG was new, it’d fare differently. For the sake of fairness, I checked it against comparable files from the year 2011, and it fared better in such a context; the logic issues in some builds remained, but the output and capabilities of the builds proved to fare better in that context. They tended to be more focused, though – with several dumpstats resulting in oftentimes e.g. one good save and two abysmal ones. In many ways, this disqualifies the NPCs for anything but cannon-fodder with expensive equipment. And that’s a pity.

When all is said and done, I can’t really recommend this tome. It has learned from its predecessor, but not to a sufficient degree, and without lore or similar saving graces, I just don’t have anything but the stats to judge, and while the quantity is impressive, it is extremely uneven in its spread, and its quality is less impressive than what I had hoped for. Particularly the bugs that hamper direct use the builds as NPCs are what ultimately make me round down from my final verdict of 2.5 stars. I expected better.

You can get this tome of NPCs here on OBS.

If you consider my reviews to be informative, consider leaving a donation, or joining my patreon here.