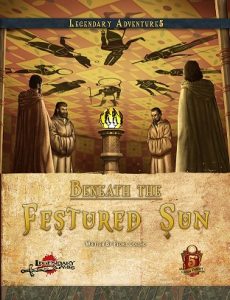 Okay, the first thing you need to know is the following: This module was originally intended to be run in conjunction with Pathfinder’s Mummy’s Mask adventure path – so in case you’re converting that one, this will very much be up your alley. While the introduction does mention this, the book as a whole has been converted to 5e with care – e.g. an eidolon, which is part of the story, now has a different origin that does not presume the existence of the like in 5e.

All right, still here? Great! Groomed from an early childhood to serve as priestess of the goddess of death, the individual called Kapanek developed her own profound beliefs, a variation, a heresy of the doctrine followed by the majority of people in ancient times – unfortunately for her, her own talent would prove to be her undoing, as a being that looked somewhat akin to a skeletal herald of Anubis manifested- an entity born from her own talent, mistaken for a herald of the gods…but then, a dread plague struck and was all her foes required to take her down and slaughter her family. Her death curse unfulfilled, the world has turned…but the thing birthed from her power has schemed for a long time to fulfill the vengeance of its mistress.

As the PCs return to delve once again into the dungeons, they are notified of the ruins being closed since civil unrest and the rare astrological event “Festered Sun” is happening. From the get-go, the module offers a significant assortment of options to gather information, with higher checks providing more knowledge – the original, pretty straight skills have been taken over, with the initial sequence providing means for both Wisdom (Perception) and Charisma (Persuasion) to get slightly more out of the deal. On a nitpicky side, I think two different tables here would have been prudent for 5e. The PCs (and other parties) have a vested interest in resolving the unrest, since a local inquisitor is quick to point his finger at the tomb-raiding groups as a possible source for the issues. In order to find the truth behind the strangely powerful curse – Ruja, the man in charge, offers 3 venues to start the investigation. For one, the Anubian sects that follows lost and forgotten Kapanek’s doctrines needs to be inspected; secondly, the astronomer Gyep tried to warn the city, but was laughed at – so checking him out may help. Finally, the is an odd mirage surrounding Mafiris Estate that should most definitely be investigated. Choosing their entry vector, the PCs receive a court order exempting them from the curfew.

Stepping outside and looking up at the festered sun can cause blindness, as a strangely compelling curse seems to affect the very city and exposure to daylight may similarly cause burns via another curse – in a rarely seen level of detail, the precise wording of the curses uttered has been reproduced, which is pretty awesome, at least in my book. In the camp of the Anubians spawned from Kapanek’s teachings and the PCs are generally welcomed to the camp of the heresy, though in the shadow pavilion, the metal globe with the silhouetted shapes of ancient gods (see cover) is interesting…and the leader of the sects, one brother Thute, seems to be less than pleased with the meddling PCs. As the investigation winds down here, a shadow will assault the PCs – which is taken by the locals to be an unfettered aspect of the soul (the 5 aspects of the soul as defined by Kapanek’s teachings are explained in detail) -it is also said belief that may put an end to the dread curses…but so far, the PCs don’t yet know that. The section also provides further hints to pursue, the means to duke it out with a swarm of desert rats…so yeah, enough versatility.

The PCs may actually witness an abandoned cistern defended by rather aggressive crowds of people that guard a woman of blood: Partaking from her blood seems to eliminate the curses…but drinking human blood from the strange apparition does have its own risks – the PCs will have to take a close look at the abandoned cistern’s insides and deal with whatever lurks in its tainted depths. In a minor nitpick, the relatively intriguing altercation against a troop in pathfinder has been replaced with some standard thugs…which does decrease a bit of the encounter’s unique style.

The temple of the goddess of death, which hands out alms and bread, may well be a source of the issues – and indeed, stealthy gremlins have been switching breads, spreading dread contamination among the inhabitants of the city.

Slowly, the pieces start falling in place and the mirage-covered Mafiris estate may be the most lethal of the respective areas -inside this planar bubble, the PCs can actually meet Kapanek’s tainted, reincarnated form…and whether they can get some information out of her or not, in order to save an old woman who does know more, the PCs will probably have to deal with the lethal creature that once was Kapanek – now a dread, unique fiend.

Editing and formatting are very good, I noticed no significant issues pertaining rules-language, though e.g. the formatting of one statblock has the challenge in the header. There are some minor hiccups pertaining formatting, but nothing serious. Layout adheres to Legendary Games’ two-column full-color standard and the pdf comes with copious pieces of artwork, all in full color. Legendary Games fans may know some of them from other books, but not all.

Pedro Coelho’s “Beneath the Festered Sun” is a glorious book for the Mummy’s Mask AP – and in 5e’s iteration, it still remains a more than neat module that can stand on its own. The investigation’s skill-checks, with some minor exceptions, are pretty conservative and fit well within 5e’s design paradigm. (The initial skill check table for set-up information being one exception – the highest DC there is 25, which, while not impossible for 5e 3rd level characters, requires some luck to hit.)

The author also has crafted truly astonishing, beautiful full-color maps, both in player-friendly and GM-versions – the maps are great. On a nitpicky aside, the main antagonist is mentioned to have used bestow curse…but the spell is not listed among those currently memorized by the creature, which seemed odd to me. Beyond these nitpicky components, “Beneath the Festered Sun” remains a good investigation set against an Egyptian backdrop, one that manages to evoke a sense of the mythological and unique. This module per se is great…but it does lose some parts of its identity in the conversion.

You see, the setting and its unique premise assumed by the original AP is still implicitly here – while you can adapt it easily to any quasi-Egyptian environment, the matter of fact remains that the whole backdrop, when taken on its own without Mummy’s Mask, becomes rather opaque and detracts from the overall appeal of the module, at least for me. In order to offset this, a section on general structure, a short summary/gazetteer of a town to use the module in, something like this, would have gone a long, long way to make this feel more organic. After all, an investigation in town A might run completely different than in town B; the AP and sourcebooks for Pathfinder took care of that…but for 5e, the module does not have this luxury and feels a bit more opaque than I like.

As presented, as a module divorced from the AP that spawned it, “Beneath the Festered Sun” still structurally works, but it loses a lot of its charm and unique positioning and most of its flair, becoming significantly more opaque than its original iteration. As such, I consider it by no means bad, but also short of what it could have easily been as a stand-alone module. My final verdict for the 5e-version will hence clock in at 3.5 stars. Now personally, this somewhat opaque background would make me round down for the purpose of this platform, but if you’re playing Mummy’s Mask for 5e, consider this to be a must-have book instead and consult my review for the PFRPG-version – for the structural benefits this lends to the AP when used in conjunction, still remain significant. Additionally, I do have an in dubio pro reo policy and as such, my official reviewer’s verdict will round up.

You can get this investigation here on OBS!
Endzeitgeist out.