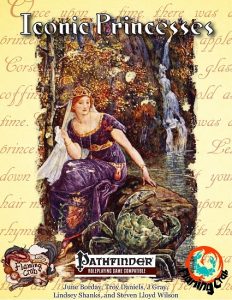 This installment of the creative Letters from the Flaming Crab-series clocks in at 14 pages, 1 page front cover, 1 page editorial, 2 pages of SRD, leaving us with 10 pages of content, so let’s take a look!

The planes- and realms hopping ship UCS Flaming Crab was almost done for – but thankfully, they were saved by the arrival of 4 gorgeous women that defeated the onslaught of raptor-men…sad women also happen to be a take on classic princesses, as seen through the glasses of PFRPG. Presentation-wise, we get 1st level, 7th level and 12th level iterations for the respective princesses…so without further ado, what can be found here? Well, first of all, the pdf sports notes on traits for campaigns using them for each of the builds.

Viruden, aka Beauty, is a delightfully non-standard take on the tale – he Beast, gentle and caring, was slain and thus she roams the land, clutching his rose (a new and fitting magic item) and defending the powerless with terrible powers – for Beauty here is an aasimar witch. The build include flavorful skills, and generally, equipment and a development that makes sense from an organic character’s point of view. Her rat familiar Hami is included.

Next up would be Mulan, whose story has been left more conventional – however, her build is not what I would have expected – we actually get a brawler here…yes, with fighting fan and a lucky cricket as a new item. Nice.

The third entry, though, is where the pdf fully comes into itself: The classic tale of passive Rapunzel gets a thoroughly awesome spin: Shalista was taken to her aunt, since too many suitors were asking for her and her dad feared violence – said aunt, wild-haired and weird, demanded service and silence and her hair grew…but at the same time, there was a method in this: Her gift to Shalista would be not only freedom, but the power to fend for herself. Teaching her the Tresswhip technique and granting her the new hair spike weapon to be used in conjunction with it, Rappun-Zel was born as a bonafide badass monk with a cool, unique fighting style. Two thumbs up!

Okay, the final build herein may actually be a similarly cool one – Snow-White is reimagined as an Occultist, including a signature spell that pertains the old ending when she forced her stepmother to dance herself to death in searing shoes. (Yes, German fairy tales are hardcore!) The spell is very evocative in its visuals, but its rules require close reading to fully grasp – basically, you can halve the damage it causes by spending a move action, dancing – this move action does not actually move the affected character, though, and hence the character may still 5-foot-step. Explicitly stating that the dancing, while requiring a move action, is not actually movement would have helped here – also, since I am not sure whether dancing is supposed to provoke AoOs or not – I *assume* it should, but I’m not sure. On the cool synergy-side: When running AAW Games’ absolutely SUPERB Snow-White module and ending it with Snow-White and a PC falling in love, using a build here (and disregarding the take on the story presented in this pdf) may make for a pretty cool twist!

Editing and formatting are pretty good – while I noticed a missing blank space and similarly minor hiccups, as a whole, the builds are neat. Layout adheres to Flaming Crab Games’ two-column full-color standard and the pdf provides some nice, thematically fitting artworks I haven’t seen before. The pdf comes fully bookmarked for your convenience.

June Bordas, Troy Daniels, Lindsey Shanks, Stephen Lloyd Wilson and J Gray deliver one fine array of cool characters – in spite of not using archetypes, the builds are relatively complex and certainly nothing to sneeze at – the iconic princesses herein are, one and all, fun and evocative. The builds all range in the upper echelon, with Rappun-Zel being the concept-wise coolest and Snow-White’s build being my favorite, though the other two certainly aren’t bad either. The supplemental material is neat as well and overall, this can be considered to a well worth little NPC-supplement. While not perfect, I will settle on a final verdict of 4.5 stars, rounded down to 4 by a tiny margin.

It is also part of a current charity bundle for J Gray and his family – you can get that bundle here!