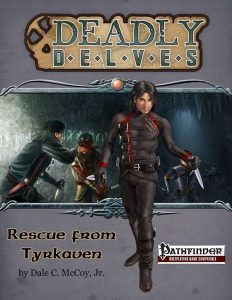 This installment of the Deadly Delves-series clocks in at 18 pages, 1 page front cover, 1 page editorial, 1 page SRD, 1 page back cover, leaving us with 14 pages of content, so let’s take a look!

As far as supplemental material is concerned, the module includes stats for a Small negative energy elemental, which is nice, as well as an evil book contained some dark rituals and tricks for folks associated with the living dead. These, alas, do not come with proper rules-codification and thus render the book very much an evil story-item for the PCs to destroy – somewhat odd, considering that the presentation makes it look like a regular item, and since the defense mechanisms of the book have been properly codified. The module sports read-aloud text for your convenience and provides some guidance regarding negotiation etc. during the initial hiring talks.

All right, only GMs around? Great! So, the PCs are hired to retrieve a caravan’s crew, taken hostage by hobgoblins, and, if possible, a couple of barrels of wine the goblinoids stole. A mad beggar pronounced a dire warning as the PCs set off. En route, we have a random encounter chosen from a list of 6 (solid, brief ones; nothing too crazy), before the PCs arrive at the hobgoblin cave, where the first couple of rooms present a pretty vanilla hobgoblin crawl, with a CR 3 ranger and CR 2 acolyte statblock; the dungeon’s first 10 rooms offer some choice, aren’t linear and generally are nice. The one thing that’s odd in the complex would be all those weathered glyphs on the walls.

Well, turns out that this is a bait and switch scenario: the complex is neatly bisected into two different areas, with the final 4 areas across the river containing the remnants of agents of the cult of dread Tyrkaven: Extremely fast (50 ft.!) cursed zombies with CR ½ and the ability to emit a bolstering screech. Casting a single necromancy spell alerts these critters and has them burst into the rest of the complex! (The speed is important, also since they need to jump across the river and have no ranks in Acrobatics.) Chaos erupts, and chances are that the single hobgoblin who fights alongside the PCs may make for an interesting future ally. The Warmaster of these tyrkaven-zombies clocks in at CR 4, and the ghost of a madman can potentially provide further hooks. The pdf contains two handouts, which is a nice bonus. No template to create your own tyrkaven-undead is included, alas.

Editing and formatting are very good on a formal and rules-language level. Layout adheres to a two-column full-color standard and the pdf sports solid full-color artworks. The cartography is similarly full color and nice, though, alas, no player-friendly version is included. The pdf has bookmarks that work, though they show up as gibberish in my version. The pdf comes with a second, printer-friendly version. Kudos!

Dale McCoy Jr. provides a nice and solidly-executed bait-and-switch scenario. It’s not necessarily a groundbreaking one, but it doesn’t try to be. It executes its angle well and is enjoyable. That being said, there are a couple of small details in book, lack of player-friendly map, etc. that make this one feel less polished than the excellent, more recent installments in the series. All in all, I consider this to be a solid and fun module that plays better than it reads, at least in the hands of an experienced GM. Having an enemy-progressing chart/tracker would have made sense here. All in all, my final verdict will clock in at 3.5 stars, rounded down for the purpose of this platform.

You can get this unpretentious sidetrek here on OBS!