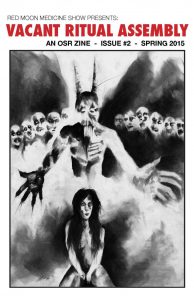 The second installment of the Vacant Ritual Assembly ’zine clocks in at 24 pages, 1 page front cover, 2 pages editorial/introduction/suggested reading/listening/watching, 1 page advertisement, 1 page back cover, leaving us with 19 pages of content, laid out in 6’’ by 9’’ (A5), so let’s take a look!

As before, the rules assumed here regarding OSR-system employed would be LotFP. As such, it is intended for mature audiences and has a weird/dark fantasy vibe. The pdf sports vulgarity, if you mind the like.

The pdf’s proper content begins with a d66 table of names, with male, female and family-name column provided, and family names focusing on a somewhat English/French-style: Chamberlain and d’Aguillon, for example. This is followed by a nice, painless page that depicts the different, classic zodiac signs, assigning a +1 ability score bonus and suggesting personality traits for the signs. Solid, if not exactly mind-blowing so far.

This changes immediately on the next pages: On a two-page spread, we get a top-tier, gorgeous isometric b/w-map of the forlorn fishing village Dretcher’s Bay. Seriously, I was utterly flabbergasted to see a map of this quality in a humble fanzine, and the map is annotated in a player-friendly, key-less style, thus not breaking immersion. Led by three crabber captains (who come with mugshots on the lower border of the page), the place is pretty miserable, but ties seamlessly into the next article, on carcinology, where the naturalist living in Dretcher’s Bay shares his observations on the local bell crabs and highlights the costly sea coat. And yes, aforementioned Bell Crabs get monster stats. Oh, and there is the issue of the nephropids, lobster-like humanoids that live on a nearby island, making for a further complication for the region. Scratchy pencil-artworks add an illusion of looking into a notebook, and the read-aloud text for these crunchy bits adds to this conceit. Heck, we even get a size comparison.

The next double-page spread deals with the secrets of Acray, ruins nearby, swallowed by the sea. The article mentions briefly e.g. the presence of a dolphin sorceress (alas, sans stats) and loot to be found under the sea, as well as Bell Crab icons noting where these dangerous beings can be found. This is a nice addition to Dretcher’s Bay, though here, we only get a keyed version – no player-friendly version is included, which is a bit of a pity, for the top-down map is pretty nice.

After this, we have a guest article by none other than Anxious P, known for creative and unique artworks in various OSR-supplements. Here, we learn about oarsmen and the strange fares they may demand – from years to fingernails and vitality, this section makes paying the price…interesting. This one also comes with a d66-table of various woes the oarsman may confess to. Another winner!

After this, we take a look at brief sidetrek module inspired by a LotFP-artwork, intended for low level characters: Long ago, a Cyclops roamed the world, doomed to roam the world for the sin of treason. The titular eye has very potent effects and comes with full stats as a magic item. The Cyclops, doomed, died one day, and when an insane backwater guy found the tomb with its cyclopean motifs, he managed to create a misguided pseudo-religion of sorts around it. The hillbilly-ish man has since spawned a clan (called “Behelden” – and yes, the author knows this is no word!) of devoted beings. Wandering monsters and a solid map accompany this mini-adventure, and we get stats. While a player-friendly, key-less version of the map would have been nice, I consider this to be a solid sidetrek.

The ‘zine concludes with an interview with Greg Gorgonmilk.

Editing and formatting are very good on a formal and rules-language level. The b/w layout deserves special mentioning, as does the artwork and cartography – this ‘zine is absolutely GORGEOUS and aesthetically-pleasing. The cartography of Dretcher’s Bay alone makes the low $2.00 asking price of the otherwise pretty brief ‘zine totally worthwhile. The maps are really cool, but I wished they were layered or came with player-friendly versions. Unfortunately, the pdf has no bookmarks, which constitutes a comfort-detriment.

Clint Krause and Anxious P provide a surprisingly inspired installment: Anxious P’s article is great and the connected articles on Dretcher’s Bay are amazing, generating a cool, compelling atmosphere. The crunch-density increased in comparison to #1, and all without compromising the atmosphere. The adventure side-trek is slightly less amazing, but considering the extremely low price, this is absolutely worth getting if you enjoy the slightly odd. My final verdict will clock in at 4.5 stars, rounded up for the purpose of this platform.