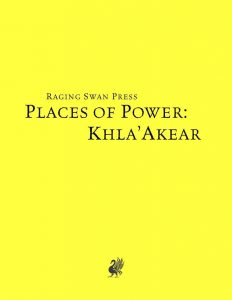 This installment of the Places of Power-series clocks in at 13 pages, 1 page front cover, 1 page editorial/ToC, 1 page SRD, 2 pages of advertisement, 1 page back cover, leaving us with 7 pages of content, so let’s take a look!

So, what’s this Khla’Akear? Well, nowadays, this holy stupa is also known as the monastery of the Yellow Dawn; as the pdf specifies in the page depicting the vicinity (including a glorious, original b/w-artwork of the place), it is situated on a bend in a long, tranquil river that traverses its path through a fertile valley. Small settlements dot the surrounding area, and it is said that the region is home to numerous lesser known deities and spirits of the land, lending the place a somewhat quasi-asian theme. To the east, a hostile jungle looms, while the west is guarded by a massive mountain range…but all of that is just tangential to the rather interesting concept of this locale.

As always in the series, we get a brief summary in the beginning, including a selection of 6 whispers and rumors and notes on local dressing habits. The pdf also rewards PCs that do their legwork, providing some lore on the location for those players that value knowing what the PCs get into. On the referee’s side of things, we receive a bit of advice on how to incorporate the location in your game.

Now, if the mere mentioning of “Yellow” ´generated Hastur-associations for you, you’d be thankfully wrong this time around, for the concept of this place is more interesting: You see, this monastery was once the palace of a clan of dread rakshasa, who have been subsequently vanquished and imprisoned in the stupa, removed from the cycle of reincarnation. More importantly, the thus imprisoned evil entities have since been forced to lend their powers to the monks, with the Yellow Dawn adherents healing the damage the horrible beings wrought.

If you’re like me, you’ll notice immediately the interesting moral potential here: Is it okay to basically torment an evil soul in order to do good? If these souls have been removed from the circle of reincarnation, is such an imprisonment in accordance with the will of the gods? If so, where do you draw the line. This supplement, in short, poses an intriguing moral conundrum.

Now, this is part of Raging Swan Press’ evolved formula regarding presentation: This means that we get a whole, massive table of 20 entries of dressing and events to enhance the game and kick things up a notch; this renders the place much more alive than it otherwise would be, particularly since the supplement also explains local customs and laws. Each of the 6 different, keyed locations come with a brief sentence of read-aloud text, and there are “What’s going on?”-entries for the majority of these. Here, we find realized adventure hooks for the referee to employ, and to add further use, two of these locations also receive their own event tables, both of which are 6 entries strong.

In the tradition of Raging Swan Press, we also get write-ups for a variety of NPCs, with class-references adjusted to old-school classes, but said write-ups do not feature stats, instead noting distinguishing features, mannerisms, etc. This time around, we get no less than 6 interesting persons. Cool: Some actually have mechanical repercussions!! The system neutral-version does come with a nice marketplace section that has been adjusted to account for the different realities of old-school gaming, but alas, lacks any rules for the tapping into souls practiced here. This being the system neutral version, I won’t hold that against the pdf.

Editing and formatting are top-notch, I noticed no serious hiccups on a formal or rules-language level. Layout adheres to Raging Swan Press’ two-column b/w-standard and the pdf sports both really nice b/w-artwork and a high-quality map by Maciej Zagorski. The pdf comes fully bookmarked for your convenience and in two versions – one optimized for screen-use and one optimized for the printer.

John Bennett is one of the authors out there who should get a lot more opportunities to write: His prose is inspiring, and he knows how to create a flavorful atmosphere in a concise manner. This place is no different, sporting a truly intriguing and smart premise that every referee worth their salt can develop into a truly remarkable place to visit. On the fluff-side, this is amazing.

In contrast to the PFRPG and 5e-versions, it would not be fair to complain about a lack of rules for the tapping into the souls of the fiends within, and neither would it be fair to hold the lack of unique martial tricks against this. As such, I am left with a supplement that is frankly inspired and nothing to complain about – hence, my final verdict will clock in at 5 stars + seal of approval.

You can get this inspired locale here on OBS!