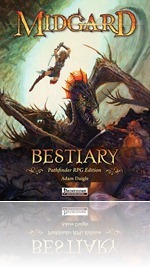 If you’re like me, the new Open Design is a must and an integral and compulsory drain on my campaign budget and thus, I grew to be more than a fan of the stellar community-driven projects that came out of Open design ever since I stumbled upon it. Thus, this bestiary was essentially a no-brainer I HAD to get. After reading Adam Daigle’s (now of Paizo fame, but known to just about everyone, I gather) introduction and thanks, we jump right into the content with two creatures from “Tales of the Old Margreve” – the disturbing Ala and the woodland Alseids greet me once again from the pages, before we get the first critter that should set a precedent for the imaginative potential herein: The CR 14 Andrenjinyi, direct descendants of the Rainbow Serpent, make for deadly combatants that feature the ability to travel via rainbows. Even cooler, they can swallow foes, baleful polymorph them and regurgitate them after wards. And then, we get one of my favourite entries herein: Baba Yaga’s 3 horsemen Bright Day, Red Sun and Black Night come with a sample statblock as well as one of the best templates I’ve seen in quite a while – have I mentioned their abilities to age you or be banished via just the right spells?

Less epic, but still interesting is the Bagiennik, a strange race of aberration that can heal via their oily secretions and make for unpredictable allies/foes. Fans of Nick Logue’s writing and the stellar OD “Blood of the Gorgon” in particular may rejoice at the conversion of the Blood Hag to PFRPG and the disturbing new artwork provided. Among my personal favourites, the Oculo Swarm is a tangle of acid-squirting, eye-extracting things, while the evil sandmen seek to close your PC’s eyes …forever. The Urochar, also known as strangling watcher, is perhaps one of the most disturbing aberrations I’ve seen in quite a while and at CR 17 is definitely no pushover.

The CR 11 Bone Collective was one of my favourite critters in “Empire of Ghouls” and the subsequent partial reprint in the “Imperial Gazetteer” – for those not in the know: Imagine a humanoid undead that is actually an almost indestructible swarm of bones with a hive-mind. The leaping Bone Crabs are another old acquaintance I enjoyed seeing here.

The CR 2 Broodiken is supremely creepy: Looking like a small babe of the species with a fanged, old face these constructs have to be birthed by their creators. Disturbing indeed! The sonic-blasting Bukavac can be considered a neat alternative for the Destrachan, while the anthropomorphic Burrowlings, who resemble prairie dogs might prove to be interesting allies with a superior grasp on certain teamwork abilities. The beasts of burden of the drakhul-empire and many an underdark civilization are also part of the deal with the Carrion Beetles and the potentially lethal Cavelight Moss also makes a beautiful, but deadly appearance. With the Darakhul and their empire being a part of the canon, we also get stats for these high ghouls, imperial ghouls, iron ghouls and the legendary bonepowder ghouls – one of the creatures that I personally consider awesome. The allied Deathcap myconids also feature in this book

The spellslot siphoning Chelicerae-spider-creatures and the iconic children of the briar (the latter also known from TotOM) provide more earthly foes, while the devilish chorts make for deadly deal-makers at a CR of 15 and their CR 17 Orobas brethren offer infernal advice. Ink Devils, servants to Titivillus, the scribe of hell, also get their revision and the gilded devils in service to Mammon (which you might also recall from a specific KQ/OD…) also see a return. . Part of one of the ODs I have missed (probably Steam & Brass or new, I’m not sure), is the disturbing Automata Devil, which is essentially a hellish clockwork taskmaster.

Very in touch with the folk-background and sense of ancient traditions, the Cikavak is a magical bird that can be called via a ritual detailed in its entry. A bane of the fey, the plant-construct Feyward Tree makes for a truly unique change to the plant+fey-trope with its flaying leaves, while the firebird can be considered to a mortal version of the phoenix. Northlands patrons will recall the Thursir Giants and Valkyries. Goblin sharks and the dust goblins also feature herein, as do the Lich hounds which just may rip your guts out!.

But honestly: What do you think when hearing Zobeck? Bingo, Clockworks! And thus clockwork beetles and swarms, haunts, huntsmen and myrmidons feature just as prominently in these pages. The castoff failures of the gearforged, the Fellforged, also get their own entry, as do the weaving, mechanical spiders of the honourable order of weavers. If you’re going for a more fey-like approach, the Death butterfly Swarm might make for some iconic and disturbing encounters – remember the Fringe-episode “Dreamscape”? Yeah, well these are worse. You can’t even run from these things and once they have you, they may hold you while cutting you to shreds! No less disturbing, possibly even more so, is the Derro Fetal Savant, a prematurely born, mad foetus in an enchanted cage that can exchange souls with potential host bodies. I think this one was part of “Halls of the Mountain King” and it’s great to see this particularly disturbing bugger be converted to PFRPG. More on the cute, but deadly side is the dire weasel and the dogmole. While the latter is so ugly it’s cute again, the derro-created mutation of the Dogmole Juggernaut will send many an adventurer fleeing for their life.

And then there’s one of the coolest critters I’ve seen in quite a while: The Doppelrat resorts to arcane mitosis when stressed out and for 4 rounds when stressed, the number of live doppelrats quadruple up to a maximum of 20 per doppelrat. This critter is pure, iconic GENIUS. If you can’t see the vast multitude of cool ways to freak out players, create seeds etc. with this and create truly disturbing scenarios (Mouse-King of Zobeck, looking at you!), I don’t know which critter can do so.

Fans of dragons and drakes also get their due with the cave (I think that one was also Empire of Ghouls) and mithral dragons and the coral (See Sunken Empires) and the massively powerful CR 15 star drakes, which are to my knowledge, new. Disturbing and rather smart, the Dragonleaf tree are plant-sentinels loyal to their draconic masters. Oh. And the artwork rocks hard!

On the disturbing side, the eel hound, a deep one’s best friend, is included in the book and drowned maidens also feature herein. Will-o’-wisp-like witchlights and sparks are also here to thwart your PCs – e.g. by possessing them!

Golemcrafters also get 3 new creatures, each of which brimming with iconicity – Salt-, Eye-, and Steam golems. All of them featuring more than one signature abilities – great! The disturbing Horakh is a dread version of a cave cricket – the beasts suck the eyes out of their opponents and implant eggs into their victims. Boreas’ Ice maidens, half-merfolk and the Isonade from “Sunken Empires” can be considered among the cooler and more iconic beings from OD-projects.

The Kot Bayun, a magical cat that can cure conditions via their tales and put foes to sleep is another prime example for a creature that can work as an iconic adversary or ally. Devious house-spirits, the horned, crone-like Kikimoras and the Lorelei make for smart fey, while the Leshy, Sap Demon, Suturefly and Zmey (many-headed dragon, btw.) from TotOM complete a selection of stellar creatures with ties to nature. The Shadow Fey also get their write-up here, as does the vulture-like Gypsosphinx.

The hunting Stuhac, a powerful leaper, has the ability to telekinetically hamstring his foes and some neat vermin are included in the book, as are the wharflings – fur-less, ratlike, swarming creatures. My personal favourite little creature at low CRs, btw., would be the Treacle: A shapeshifting, charming ooze that takes on the appearance of e.g. kittens or infants, only to drain your blood while you’re charmed by the cute little bugger.

The pdf also provides lists of monsters by type, by CR, by terrain, by monster-roles, almost two pages of re-skinned monsters and closes with 2 pages of encounter tables.

Editing and formatting are top-notch – I didn’t notice any obvious glitches. Layout adheres t a 2 column full-color standard and the pdf is BEAUTIFUL. The artwork provided show that they belong to different projects with some being b/w while others are full color, but overall they have in common their top-tier quality. The pdf comes with extensive bookmarks. I can’t comment on the print version yet, though I’ve ordered it – as soon as I get my hands on it, I’ll let you know. Adam Daigle + Monsters. If that does not make you twitch with anticipatory glee, the you probably haven’t read one of his books. Even better, many of the creatures from the no longer available Open Design projects that were 3.5 have now finally been updated to the PFRPG system and what an update – signature abilities abound and in fact not ONE of the creatures herein feels like filler. Not one. From the expertly done conversions (by Adam Daigle, Chris Harris, Michael Kortes, James McKenzie, Rob manning, Ben McFarland, Carlos Ovalle, Jan Rodewald, Adam Roy, Christina Stiles, James Thomas and Mike Welham) to the great and smooth graphic design by Marc Radle and the neat artworks, this bestiary feel like a true premium work.

While I endeavoured to tell you about some of the creatures herein, I quickly started to realize that I liked all of them. And no, I haven’t mentioned every creature herein, I have e.g. not mentioned the leech vomiting putrid haunt… Well, now I have.

If I have to criticize anything about this pdf, it would be the format: While I applaud the update of as of yet unconverted beasts to PFRPG from ODs that have been unavailable to the general public, I would have loved for ALL of the creatures to be updated – the “Mother of Gorgons” for example, is absent from this book. The monsters reprinted from the Imperial Gazetteer, Sunken Empires, Northlands, TotOM and other sources that already are PFRPG also feel rather unnecessary – after all, these books can still be bought, are up to the current rules and are rather affordable. If the aim was to collect all monsters in one book, I would have understood the reprints, but there are quite a bunch of beasts missing, including the iconic Ljósálfar and the Nightgarms, just to name two. While I guess they can still be included in the second Midgard Bestiary, I would have loved either all of the creatures to feature or at least have e.g. all creatures from e.g. the closed ODs to feature herein.

One can’t have everything, I guess, but complaining about this should give you an inkling of how good this bestiary is – I lack any reasons to complain apart from the recycling of PFRPG-monsters from other OD-books and seeing the amount of unavailable 3.5 project-creatures and original monsters herein, even that is not enough to tarnish the bestiary. Being a stellar monster-book, my final verdict will be 5 stars, but I’ll omit my seal because with all the OD-books I already have, I would have preferred more original monsters or a complete collection.

Midgard Bestiary is available from: