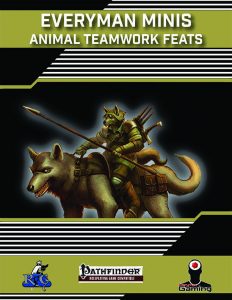 This Everyman Mini clocks in at 8 pages, 1 page front cover, 1 page editorial, 1 page introduction, 2 pages of SRD, 1 page blank, leaving us with 2 pages of content, so let’s take a look!

The new feats within are:

-Aspect Unity: requires animal focus; nets +1 to Ref and +2 to initiative when you and an ally within 60 ft. emulate the same focus.

-Aspect Harmony: Builds on the previous feat, increases bonuses granted by the aspect, but not the prereq feat, by +50%.

-Coordinated Grapple: Nets you basically advantage (roll twice, take better result) to initiate, but not to maintain grapples versus targets threatened by character + ally with the feat.

-Coordinated Pounce: High-level feat building on Coordinated Charge; even though called pounce, it actually behaves more like Vital Strike and provides synergy with those types of feats.

-Coordinated Rend: Okay, this one can be interesting: When hitting a creature you and an ally threaten twice or more during a turn, the ally gets a free attack as an immediate action., but only at ½ Strength-mod to damage, regardless of other abilities.

-Coordinated Tie Up: Builds on Coordinated Grapple and allows an ally to aid, decreasing the DC to tie up creatures without pinning them by 5. This is really cool, if situational. Still, I can totally see this as a great feat to award/use in conjunction with archetypes.

-Go for the Eyes: Nets an increased bonus to atk for both, if the character or ally has higher ground, and the target is treated as dazzled. Interesting one.

-Intimidating Menace: When an ally successfully Power Attacks a target, you can attempt to intimidate at +2 to demoralize as an immediate action; has really cool optional Dazzling Display synergy, and is better when the ally crits. Nice one.

-Mounted Disengage: When an ally negates a hit with Mounted Combat while adjacent to you, you may use an immediate action to move away. Really neat!

-Retributive Strike: Immediate action counterstrike when an ally with the feat is brought to 0 HP; +4 to crit confirm and increased multiplier for the attack. The latter should probably cap at x4.

-Scent Seekers: Cool: Allows two beings with scent to automatically pinpoint sources. Will see a ton of use in my monsters.

-Swimming Diversion: Atk bonuses while one target is swimming; +1 more if the foe’s swimming as well.

-Toppling Opening: Okay, this one is brutal: If the target’s tripped, it becomes flat-footed against the other user of that feat until the end of the next turn. OUCH!

-Trampling Opening: Adds AoO to the unfortunate being trampled. Neat!

-Pack Evasion: Requires mouse aspect; when you and animal companiona re subjected to a Ref-save prompting effect, you may, as an immediate action, switch to mouse aspect. Gets use interaction right. Neat one!!

-Pack Flexibility: Lets animal share in teamwork feats granted by martial flexibility. Cool for the relevant builds and helps them stand out!

-Raise Master: 1/day, a companion can use breath of life, with an extended period where it may be cast. Neat!

Editing and formatting re very good on a formal and rules-language level. Layout adheres to the clean and easy to read 2-column full-color standard with white background. The artwork is nice and the pdf has no bookmarks, but needs none at this length.

Luis Loza’s Animal Teamwork feats run the gamut from being very potent to being very circumstantial, but they do have in common that they add something and allow for a couple of teamwork tricks that I really enjoyed seeing. As such, my final verdict will clock in at 4.5 stars, though I do feel that this is closer to 4 than 5; hence, I will round down.

You can get these companion feats here on OBS!