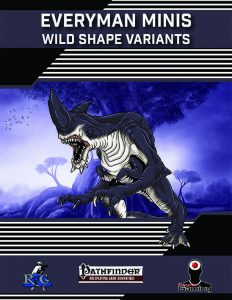 On the introductory page, we receive a new shifter aspect, originally penned by Alexander Augunas for the Know Direction network – that would be the Eagle Aspect, which enhances Cha as per minor form; major form includes good flight, bit and claws and Dazzling Display/Weapon Focus (claw), which synergizes if you have them. Dazzling Display’s action economy also improves.

The first page of the pdf is devoted to druid wild shape variants: These act as though they altered wild shape, though a maximum of one such variant may be applied. Some have prerequisites that must be met by 4th level to choose that option, and later losing the prerequisite also deprives of the option of assuming that shape.

Evolved shape nets a 3 point evolution pool that increases by 1 at 6th level and every 2 levels thereafter, and which thankfully comes with a cap. Fey shape allows for 6th level druids and higher to assume forms based on fey form spells, but eliminates the option to assume elemental forms. Alternatively, 6th level onwards can potentially allow for vermin shape I and later, its sequential improvements. This one also replaces the ability to take elemental forms.

Instead of assuming plant shapes, druids may opt for an ooze form-based variant at 8th level onwards. Minor nitpick: here,a cut copy paste remnant once erroneously refers to fey form. Preternatural wild shape also prevents the assuming of plant forms and kicks in at 8th level, allowing the druid to shape into magical beasts – nice: This gets the spell situation right.

Wild Shape Finesse is really interesting – that shape variant nets you Weapon Finesse for the shape’s duration, and later a damage boost with a natural weapon that is thus finesse’d (yep, codified properly) but prevents the druid form assuming Large or taller sizes of creatures with a Dex of less than 14.

The pdf also includes 4 different variants of shifter aspects: the minor aspects of a shifter aspect may be replaced. Animal spirit aspect is cool and lets you partially ignore difficult terrain. This should probably specify that only non-damaging difficult terrain is meant…or am I wrong? Later, this nets freedom of movement and the ability to move through creatures and plants. The aspect does reduce speed by 10 ft., though. Graceful aspect is basically the Weapon Finesse variant here, with Shifter’s Edge instead granted if you already have the feat. Mutation Aspect nets you a 2-point evolution pool, which increases at the usual levels (8th and 15th) – and yes, this prevents multi aspect cheesing, thankfully. Shifter adaptation nets you access to an animal aspect whose minor aspect your replaced with this one, chosen from the major form grants and thankfully, limited. The rules-verbiage here is brutal – kudos for getting that one right!

Editing and formatting re very good, apart froma cosmetic hiccup, I noticed no serious guffaws. Layout adheres to everyman gaming’s two-column full-color standard with a white background, and the artwork featured is nice. The pdf has no bookmarks, but needs none.

David N. Ross is a veteran designer of impressive skill, and it shows here – the wild shape variants are potent without being overbearing, and the rules-operations are tight and well-executed. All in all, a great supplement for anyone who wants more customization options for the shifter, or weirder druids. My final verdict will hence clock in at 5 stars.

You can get these cool variant options here on OBS!