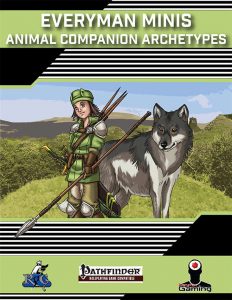 This Everyman Mini clocks in at 7 pages, 1 page front cover, 1 page editorial, 1 page introduction/explanation, 2 pages of SRD, leaving us with2 pages of content, so let’s take a look!

All right, so the notion of animal companion archetypes, if you haven’t stumbled across it in some shape or form, is pretty self-explanatory – these are basically archetypes to customize your companions, as per Ultimate Wilderness.

Elemental spawns replace evasion with a scaling resistance to one of the 4 basic elements at 3rd level, and at 9th, multiattack is replaced with a dding the corresponding special weapon property (e.g. corrosive for acid) to natural attacks; this upgrades to the respective burst at 15th level. Cool one! Empath companions get Diplomacy and Sense Motive and gains +1 skill rank per HD that must be invested in these. It also gain empathic link, but replaces shared spells. Devotion is replaced with a morale bonus versus negative emotion effects that is shared by companion and master, and 15th level nets at-will telepathic bond with the master. Really cool one – I call this one “magical Lassie” and that’s pretty much how I’ll use it.

God-touched conduit represents a deity-touched animal that has a code and will not obey instructions to violate it. The animal gets Believer’s Boon, and must choose a domain power associated with the deity. At 6th level, the HD act as cleric levels for the purpose of the domain power, and it may use the power more often. This replaces share spells and devotion. 3rd level lets the animal cast a domain spell of up to 1/3 HD spell level as a SP 1/day, and the ability also tackles companions that could cast spells. The ability replaces evasion. Instead of improved evasion, we get plane shift 1/day, self and master only, to the deity’s plane. Cool! Hidden Ally replaces share spells with the ability for the ally to at-will disguise itself as an inconspicuous critter. AMAZING!

Performer nets entertain as a bonus trick, and adds Perform to class skills and list of skills that the creature can have ranks in, and may substitute Perform for another skill it has ranks on. The creature also gains Entertaining Companion, replacing the 1st level bonus trick and share spells. 6th level replaces devotion with Enthralling Companion. These are two new feats herein: Entertaining Companion makes the animal a great distraction for hapless folks; Enthralling Companion builds on that and allow folks to potentially slip away

The pointer archetype replaces share spells and devotion with bonus feats for expert tracking. Beyond the two feats already mentioned, there are three more: Contingent Commands is GENIUS and allows you to “program” the companion in 25 words – e.g. “Defend while I am paralyzed.” This feat is a must-have! Keen Tracker lets the animal use Perception instead of Survival to track. Finally, Unusual Intelligence is a great Lassie-supplement feat: Increased Int, and the animal can read and understand its master’s languages! Another winner!

Editing and formatting are very good, I noticed no serious hiccups. Layout adheres to the 2-column full-color standard of the series, and is sufficiently printer-friendly. The artwork is nice, and the pdf has no bookmarks, but needs none at this length.

Matt Morris’ animal companion archetypes are really cool and add a whole lot of flavor to companions. The feats include two must-own “why haven’t these been done sooner” gems, and as a whole, this is well worth getting. Come on, you know you want your companion to go full-blown Lassie!! Love it! 5 stars + seal of approval!