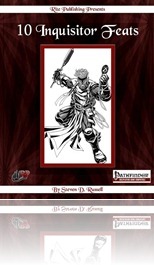 This pdf from Rite Publishing is 6 pages long, 1 page front cover, 1 page editorial, 1 page SRD and 1 page advertisement, leaving two pages of content for this no-frills-attached style little pdf, so let’s check it out, shall we?

As with the feats in “Secrets of the Inquisitor”, this pdf provides new feats, which can be used via the inquisitor’s solo-tactics as if they were teamwork feats. The feats are:

Editing and formatting are very good, I didn’t notice any significant glitches. Layout adheres to RiP’s 2-column standard and the pdf has no bookmarks, though it doesn’t need any at this length. I’m a HUGE fan of Steven D. Russell’s “Secrets of the Inquisitor”, especially due to all the solo-tactics-compatible feats and e.g. the feats that grant a powerful ability that can be used only 1/day, but isn’t wasted if your foe succeeds his/her/its save. This pdf is a logical and extremely cheap sequel to this idea and provides additional oomph for your inquisitor to make them the badasses they were meant to be. That being said, I think that the feats per se are well-crafted, though e.g. “Know Thy Enemy” feels rather weak when compared to others herein. Some of the feats herein are genius – Striking down liars with heaven’s (or hell’s) wrath? Yes, please! And tracking magic is, as mentioned, smart and a stellar example of concise writing – taking such a complex concept and shrinking it down to a feat and have it work is neat indeed. Though I’d love to see a table of sample DCs/magical tracking complications – perhaps in a future Pathways-or AQ-issue? Granted, some of the feats force a DM to be on his guard, but then again, DMs can also use these feats against the players… While the overall power-curve of this one is slightly higher than I like (you know how stingy and conservative I’m regarding that), I’d usually settle for a final verdict of 4.5 stars, but due to the unbeatable price and awesome ideas, I’m going to settle for the full 5.

10 Inquisitor Feats is available from: