Party of 1: Alosar Emanli and the Creatures from the Fallen Star 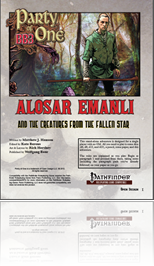 This pdf from Open Design is 15 pages long, 1 page front cover/editorial, 1 page SRD, leaving 13 pages of content, so let’s check this out!

Since this is a GM-less solo-adventure, I’m not going to give you a run of the whole module or its story and refrain myself to basic information:

Alosar Emanli is a druid and much like his ranger-brethren Elgar Fetch before him, the elf is going through a kind of coming-of-age – in fact, the pdf kicks off with the tests Alosar has to pass to become a full-blown druid. These tests are supervised by his master and thus, the chances of Alosar dying a rather slim, though he may get hurt (and healed). Since the title already gives that away: There is a shooting star and aberrations quell from the fallen star. You master leaves to hold counsel with his druidic brethren and you may find the threat and go after it or follow your master. As with the other “Party of 1”-books, there are two versions of the stats of Alosar, one for level 1 and one for level 2.

Editing and formatting are ok, though I still have some things to complain: First of all, the rules-information is printed in red, thus, if you print out the module in b/w, you can’t distinguish the two types of text. Secondly, there’s a problem with the spells: The entry that introduces the player to the prepared spells can be skipped if you fail one of the druid’s tests, which essentially leaves you in the dark regarding your capabilities. The pdf is bookmarked and layout adheres to a 2-column, full-color standard.

Now, If you look at the char-sheet, you’ll notice an absence of e.g. the “burning hands”-spell Alosar is supposed to have prepared, depriving you of a combat option you ought to have. And no, this is clearly not intentional, but a serious flaw in the overall flow of this scenario. It’s also quite fascinating that a LOT of space is wasted on this initiation rite, while the options to deal with the threat almost fall by the wayside and are rather boring. And then there’s the cardinal sin of “Solving the problem by running to your boss”, which is one potential outcome of this module and a no-go of adventure-writing 101. Add to that the fact that beings in the forest don’t respect the main character and in fact hinder his progress and we have a main character that is hard to relate to, an unfortunately rather bland threat and no truly exciting elements like Kalgor’s conspiracy or Elgar’s decisions. Alosar’s adventure not only exhibits a severe flaw in its flow of the narrative, but also is the weakest in terms of story. Thus, my final verdict will be 2 stars.

Party of 1: Alosar Emanli and the Creatures from the Fallen Star is available from: