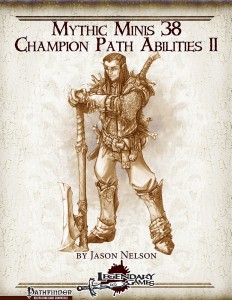 We begin this pdf with 7 1st tier abilities:

-Ancestral Arms: This allows you to gain special arms and have the weapon be tougher, allowing for mythic power to further buff the item. Additionally, at higher levels, even the base material composition of the item can be modified. Enhancing these arms can be done as if having access to the Mythic Crafter feat. Interesting!

-Mythic Challenge: Use mythic power to regain challenge and also, whenever you regain challenge this way, temporarily ignore all DR AND impose an AC-penalty on all foes you threaten. Very powerful and essentially a must-have for any cavalier.

-Mythic Flair: Regain 2 points of grit/panache for one use of mythic power. Also bypass all DR for the remainder of the turn where you regain grit or panache. Pretty strong.

-Mythic Pool: regain 2 points of the arcane pool. Spellstrikes that round ignore all DR (NASTY combo!) and additionally, you receive +tier to concentration checks the round you use this ability. Pretty strong.

-Mythic Resolve: Regain resolve, activate it as a free action until the beginning of your next turn, allowing you to spend multiple uses in one round. Interesting, but the caveat is slightly confusing – the base resolve ability already allows you to spend more than one resolve per round – one as a standard action and one as an immediate action. This ability instead provides an option to use multiple resolves to negate multiple negative conditions…if your game allows for the expenditure of more than one free action on your round. A rephrasing would help in eliminating this very minor ambiguity.

-Swift swap: Sheathe weapons as a free action. “If you expend one use of your mythic power, you can also draw a weapon as a free action.” – okay, I get what this ability does, but since drawing weapons quickly is already pretty easy, not sure whether a use of mythic power justifies that…

-Take a Knee: Instead of falling prone, you instead get to your knees – complete with easier standing up/less penalties/bonuses – I *really* love this concept-wise and execution-wise, but I wished it specified the interaction with being prone more clearly – when tripped on your knees, can you still become prone? Just as an example.

-Stand and Fight: Faster standing up sans AoOs; also execute a combat maneuver that does not provoke AoOs as part of standing up. Pretty cool!

-To the Victor: When scoring a crit, you drain mythic power, which you can either store or use to temporarily enhance your weapon. Nice.

-Unarmed Critical: Critical Focus with unarmed strikes and unlock feats based on it as monk bonus feats, with monk level = BAB for prerequisite purposes for follow up feats. Cool!

-Violent Vigor: At the end of each round in which you attack, you regain 1/2 tier hotpoints. if you charge or make a full attack, you instead regain mythic tier hit points. Use mythic power to negate fatigue, reduce exhaustion or heal ability damage. Nice concept, but fails the kitten-test – add bag O’ kittens for infinite healing while slaying kittens. LAME.

-Blood Oath: 1/day declare an oath that renders your weapon potent wounding, increases damage and crit multiplier and also adds heartseeker or seeking versus the target. Additionally, makes escaping from your sight harder, granting you bonuses to Perception and Survival. This focus comes at the cost of -1 to atk against all other creatures, but who cares? Damn cool!

-Stunning Shockwave: Stunning Fist affects cone or line-shaped bursts or targets far away, but at the cost of more stunning fist uses, 2 points of ki or two uses of mythic power or any combination thereof. Absolutely awesome!

-Violent Vitality: + save-bonus versus death/necromantic effects; when using full attacks/charge, you become immune to energy drain temporarily and may remove a negative level. For more mythic. get rid of more negative levels or ability drain. Very strong, but fitting at 6th tier.

Jason Nelson’s take on more champion path abilities on the one hand is pretty much a godsend for certain classes – cavaliers et al and particularly monks will rejoice at the obvious, awesome potential within this pdf. That being said, at the same time, some wording could be slightly more concise and the violent vigor ability could have easily been made kitten proof. Yes, I’m aware that healing this way takes time, can be handled by DMs, etc. – but why not simply include a caveat that prevents such measures in the first place? It is only due to these minor complaints I can’t settle on a higher verdict, instead settling on a verdict of 4 stars.

You can get this nice array of path abilities here on OBS and here on d20pfsrd.com’s shop!