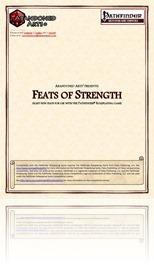 All right, you know the Bullet Point format from Abandoned Arts: 3 pages, 1 page front cover, 1 page SRD, leaving 1 page of content for 8 feats, so let’s check these out!

Editing and formatting are top-notch, I didn’t notice any glitches. Layout adheres to Abandoned Art’s no-frills two-column standard and the pdf comes with no bookmarks, but needs none at this length.

8 feats of strength and how are they? Well, at least for me, differing in quality: Where crushing disarm is a godsend for the type of character that is on a pacifist bent (Monks disarming foes, then destroying their weapons) and smashing blow is almost a necessity design-wise, there also are feats herein that are less impressive: Master of Disaster leaves a shallow taste in my mouth and the combination of charges and vital strikes also is something I personally am wary of design-wise. Gentle Giant is a godsend for players or NPCs playing a large race that also happens to be the party’s social monkey and Break Bonds on the other hand is oddly specific in its benefits. While cool, how many times do you actually get to break bonds? Capturing player characters alive ONCE without the players feeling railroaded is hard enough. For this feat to makes sense you would have to do so multiple times. Not sold. Sucker Punch on the other hand is a neat feat. So where does this leave us? With some good feats, some very specific mediocre ones and some I personally would advise against using in your campaign, making this the epitome of a mixed bag for me and thus a prime candidate for a final rating of 3 stars.

Feats of Strength is available from: