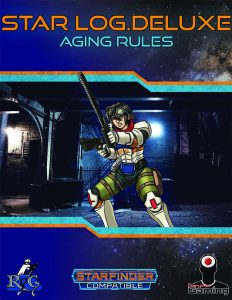 This extra-long installment of the Star Log-series clocks in at 14 pages, 1 page front cover, 1 page editorial, 3 pages of SRD, leaving us with 9 pages of content, so let’s take a look!

So, after a brief introduction to the subject matter, we begin with defining age categories, a component I found puzzling in its absence from the Starfinder core rulebook.

Each age category has an aging modifier that applies to many of the character’s abilities, acting as ability penalties, which may only be lessened, removed or suppressed by other aging effects. The mental age category’s aging penalty is applied to the mental ability score, the physical one to the physical ability scores. Infants and toddlers are restricted regarding both physical and mental acumen, while they and children have restrictions regarding physical traits. The maximum age penalty an age category can impose on its own is -5. The age categories are concisely presented – toddlers and infants are, obviously, highly restricted on the actions they can take, for example.

But more important, the aging process in itself is concisely defined, and a massive table notes age categories for the core races, legacy Pathfinder races and the massive amount of Starfinder races, including the skinwalkers introduced in the Star Log.EM-series. Since the scifi-genre is rife with complex races and uncommon life-cycles, the system can account for reverse aging etc. and similar oddities. Since the pdf provides, step by step breakdowns of aging categories, the pdf is superbly easy to tweak regarding these components. Heck, provided the GM allows, there is the option to treat characters as 25% younger or older to account for differences in maturity.

Now, Julian Barnes once said, that “identity is memory, memory identity”. – it is a sad truth that the deterioration of the physical form represents a fate that all living things have to come to terms with. Optional rules to avoid mental and physical deterioration are provided, which allow you to depict the ever-growing strain that trauma can impose on the well-being of the individual. Particularly if you’re aiming for a more gritty Starfinder-experience, these rules should prove o be inspiring. Special cases like androids or samsarans are also mentioned.

This out of the way, we are introduced to two new themes: Old-times nets +1 to one mental ability score and nets you and Int-based theme skill. 6th level enhances your bonuses for covering fire, harrying fire and aid another, provided your skill bonus in the skill in question, BAB or age exceeds that of the assisted ally – the respective conditions are presented in a concise and precise manner. 12th level lets you add +1d4 to a nearby younger ally’s skill check, provided the ally has been under your tutelage. This can be used only once per day per target, with Resolve paying for additional uses. At 18th level, you can regain limited Resolve when a younger being rolls a natural 20. The ability has a hard cap to prevent abuse. Cool theme!

The second theme is prodigy, which nets a class skill, -5 to all of the skill’s DCs, and nets you +1 in the associated ability score. 6th level allows you to roll a skill check in the skill at advantage (roll twice, take better result) 1/day. 12th level allows you to complete longer tasks quicker by entering a trance that leaves you wide open. As a capstone, at 20th level, you can regain limited Resolve when rolling a natural 20 in the skill you specialize in. The pdf also includes new technology associated with age:

NCNUs (neural cartography nanite units) are implanted in the brain and rewire the mind, enhancing the character to Young Adult category in 6 months; Youth Enhancer Systems (endocrine slot) reduce physical ability score penalties imposed by the aging modifier – these come up to Mk V. Also for the endocrine system, there’d be the quick-gro biotech, basically the biotech means to physically age you to young adulthood quickly. There are two magic serums introduced – one for age regression and one for age progression.

The pdf also contains two different hybrid items, the first of which would be the external neural interface, which allows you to directly interface with powered armor, starships or vehicles. Powered armor pilots gain initiative and Ref-saves bonuses and increased maximum Dexterity values; starships can be piloted better and gunning, obviously, also improves when taking that role. Vehicles can be enhanced regarding attacks and AI autopilots overridden. Implanting this item in adults is more dangerous than usual – though kids have an easier time surviving the process unharmed. Particularly nasty: The higher Mk versions require the previous one to be present, meaning that a new surgery for upgrading is required. Similarly, reducing such a system takes multiple surgeries, so you better know what you’re getting into… Secondly, rejuvies are pills that combine necromancy and nanobots to combat aging in a delightful satire of our culture’s obsession with youth: These can alleviate age penalties and pain, and “Gray Away” pills can get rid of physical age modifiers, with greater versions allowing for the temporary regression of mental age – this can make for particularly interesting narratives in conjunction with the deterioration-rules in grittier games, or to offset penalties of an aged character, with a pressure to adventure for credits to keep the rejuvies flowing…

Editing and formatting are very good on a formal and rules-language level – I noticed no significant formal or rules-relevant guffaws. Layout adheres to the nice two-column full-color standard of the series, and the pdf sports a nice full-color artwork. The pdf comes fully bookmarked for your convenience.

Alexander Augunas’ aging rules are precise, easy to grasp, and cleanly-presented. They fill an important hole in Starfinder’s core rules and do so elegantly. The material presented is complex enough to be mechanically-relevant, without becoming too potent, too character-defining; your character will be race and class first, then defined by the age, not vice versa. Min-maxing isn’t a good option here either. Sure, there are tangible benefits to age categories, but not enough to unhinge the math. In short, this represents a well-crafted, interesting supplement, well worth checking out: My final verdict will clock in at 5 stars + seal of approval.