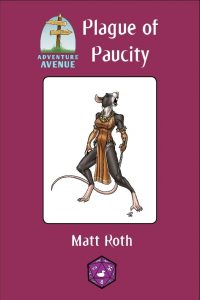 This little module clocks in at 41 pages, 1 page front cover, 1 page editorial, 1 page patreon-recognition, 2 pages of SRD, leaving us with 36 pages of content, though it should be noted that these adhere to the A5-size-standard (6” by 9”) and as such, you can fit up to 4 on any given sheet of paper when printing them out.

This is a module for 2nd level characters, set in the Last Kingdom region of the patchwork planet of Porphyra, though adaption to other settings should be relatively easy, particularly in the context of Rokugan or a similarly slightly Asian-tinged environment. The ratfolk of the Last Kingdom have thrown off the chains of the oni, driving them back into the Shadowlands under the wise leadership of the Five Clans…eh, I mean “Truths.” It should btw. be mentioned that there is a nice full-color regional map included in the deal here.

Anyways, this is pretty much as far as I can go without delving into SPOILERS. Potential players should jump to the conclusion.

All right, still here? Great! Doom has befallen the isolated Oran’Rai clan – their hospitality has been met with murder by the dread spirit Tailaan, slain in the conflict beneath the oni and the Five Truths, this wretched entity has taken command of the isolated ratfolk, driving them deep into squalor and servitude once more – but the ambitions of the entity range further, as a plague has been decimating the fish of the rivers…only a harbinger of what ill will befall the common folks if this thing is not stopped.

Thankfully, poisoned rivers have a habit of bringing adventurers to the fray and thus, it is via one of several hooks that the PCs sooner or later arrive at one of the warren entries towards the realm of the Oran’Rai. The different means of access to the warren also mean that different encounters may be had here, one of which makes use of a cool creature from the excellent Monsters of Porphyra II book. And yes, the pdf does contain full stats of all critters – including the alternate racial traits of the Oran’Rai.

The Oran’Rai warren…is pretty much a plague rat’s haven, an otyugh’s paradise: Under the dread oppression of Tailaan, the ratfolk have learned to resist poisons and diseases and now are perfectly capable of using rusted and basically broken equipment sans penalties. The defenses of the warren follow the theme of poverty and squalor – tetanus, trash heap traps…the atmosphere of desolation, decrepitude and decay is almost palpable and, from the river that winds its way through the warren to the respective caverns, the pdf sports a nice amount of detail and includes, among other things, an unreliably ally that may well lead to further adventures.

Ultimately, the PCs will have to not only destroy the blighting brew of the Oran’Rai, but also deal with the rogue creature tatterdemalion Tailaan, a powerful and cool boss, though I wished it had full stats – the base tatterdemalion can be found, once again, in the excellent Monsters of Porphyra II book, has been modified accordingly and the build makes the boss a nice change of pace as far as low-level dungeon crawls are concerned.

The pdf also features a magic item called blameless shroud, which helps the wearer attempting to lie, even when caught when doing so. Further adventure hooks and possibilities and a nice monster/challenge by region table with CRs, locations and XP and a similarly detailed treasure list help running this module.

Editing and formatting are very good, I noticed no undue amount of hiccups. Layout adheres to PDG’s 1-column standard in booklet-size, as mentioned before. The neat full-color artworks contained herein are cool to see for such an inexpensive module. The pdf comes fully bookmarked for your convenience. The map of the dungeon is in nice b/w, though unfortunately no player-friendly, key-less version is provided. The overland map of the region in full color is nice.

Matt Roth’s “Plague of Paucity” is what I’d consider to be an unpretentious, well-crafted little module. It has a lot of details for skill interaction, some nice combats and a pretty deadly boss, offset to some extent by the relatively easy difficulty of the dungeon itself. Personally, I think that a good group of 1st level characters can handle this, though the boss will be a deadly challenge if you opt to go that route. The dungeon itself sports a variety of challenges and exploring the place certainly makes for a solid module with an uncommon theme. Unpretentious, easy to insert and run (big kudos for the tables that allow for easy GM-modification of treasure and XP!), this is very much the epitome of a nice module, well worth a final verdict of 4 stars.