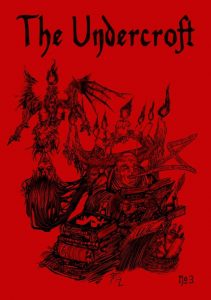 The third installment of the Undercroft-‘zine clocks in at 23 pages, one of which is the editorial, which, unlike in many comparable publications, I actually find myself reading more often than not; this leaves us with 22 pages of content, laid out in 6’’ by 9’’ (A5); my review is based on the print copy, which is a well-made saddle-stitched booklet.

Okay, so you’ll notice something pretty unique here, in that this ‘zine contains 2 different articles and a short story; the short story is penned by Alex Clements and focuses on what happens when a youthful warrior and an old warrior meet at a bridge and come to an impasse that has to result in bloodshed. There is a distinctly black, English humor here that I very much enjoyed, and considering the political climate, you could well read it as a parable. You could. Personally, while I was duly amused by it, I didn’t get anything truly out of it, having seen the topos executed before. I also couldn’t help but bemoan the lack of game-relevant components here. This would have been a really cool encounter, with both individuals statted properly, preferably with esoteric abilities, but I digress.

As always for the ‘zine, the rules employed are LotFP (Lamentations of the Flame Princess) rules, but conversion to other OSR rules-sets is not particularly taxing. Theme-wise, this is a horror-supplement; the easily-offended or squeamish need not apply, though the horror herein is more cerebral and esoteric, which is a good thing as far as I’m concerned. Anyone can throw guts a wall and say “Oooh…scaaary!” – the content herein is scary because of its context and implications.

Sicne we started at the back, let us continue like this: The ‘zine contains an article on an esoteric magic-user casting tradition of sorts, penned by Daniel Sell: The Cunning Men of the Fern Court. Okay, how do I describe these? Know Gavin Norman’s Drune from his Dolmenwood setting? You know, the forest-dwelling weirdo spellcaster-order with their strange rituals? Well, the cunning men are a bit like Drune, if the Drune were even more like crazy and scary hermits. Illustrated in a striking manner by Matthew Adams, they are drawn to the forest by visions of a black sun; naked they pass through the dense undergrowth, asking questions about bird migration, looking for answers. If the Drune are a semi-malignant conspiracy/cabal, the Cunning Men are a conglomeration of batshit-crazy, inscrutable hermits that engrave spells into their own flesh – and yes, rules for how much is lost by killing them, by taking damage, etc. are provided. The write-up contains no less than 21 distinct spells this strange tradition has brought forth. In a nice choice, the left-hand border contains the spell’s stat-information, making reading them pretty simple while conserving space. All their spells are designated as magic-user spells, with proper levels noted.

There are 7 1st level spells: Babble makes a target within sight, well, babble, and thus be incapable of enunciating anything. There RAW is no saving throw, which makes this spell capable of locking down even the hardiest of spellcasters, which renders it less suitable for other OSR-games that more frequently use magic-users as non-sociopathic madmen. In LotFP, it is less of an issue, but can potentially allow lower level characters to kill off potent spellcasters – such as a certain psychopath in Better than any man, to mention one. The Spleenful Led requires having a part of the target’s body, but on a failed saving throw, renders the target incapable of finding their way. Protection from Rain does what it says on the tin, and read entrails is a kind of haruspex that nets answers depending on the HD of the target sacrificed – mainly a narrative device. Pick up Sticks is cool – throw down sticks, and a scaling number of HD worth of creatures must obsessively pick them up on a failed save. The Even Flow is essentially a diagnostics spell, and umbilicus only has a short range, but temporarily links two targets (save if unwilling) and makes them share damage taken evenly.

We proceed with 7 2nd-level spells: You will know Nothingness disassociates the caster from paltry concerns such as cold, pain, etc. and lets them reroll checks and saves pertaining those. A Fire Walks With Me is not only in name a Twin peaks homage – the effect, traveling one league per step, also mirrors some of the classic series’ oddities. Nice! Zoanthropy is a nice take on beast shape-style spells, allowing for the assumption of animal form; staying too long, past a mystic date, in that form, alas, may see your mind become as the animal. A Curse to the Unjust requires strangling a woodland creature with rose vines, ripping them open with bare teeth, and then spitting the resulting viscera at a target – on a failed save, the target has to adhere to a rigor of pacifism for a couple of days, on pain of death of the stipulation is broken. Brittle Twigs and Bird Songs lets you break a twig, as stand-in for a target’s bones, who must save of suffer a broken appendage. A Tower of Thorns; A Wall of Vines makes rose thorns burst painfully through the skin of an individual. Do Not trust the Owls requires that you rip a tongue out of a target with your teeth; said tongue then acts as a squirming lie-detector and helps against illusions. Delightful.

The remainder of magic-user spell-levels each get a single spell, so, in ascending order: At 3rd level, we have Path of Guilt requires a painful scrubbing of soles until bleeding raw, but nets you 6 in 6 Stealth – you are perfectly silent, but leave bloody marks. Love this one! The Subtle Heart requires drinking boiling honey and amber, but may well cure all of those nearby – provided they are not killed by the light, that is. Very cool! Unmasked was developed to retain the knowledge on skins, but can be used offensively. It takes off the skin in one fell swoop, so don’t let the weird old man touch you, unless you want to die particularly painfully…A Black Sun Climbs the Ladder of Heaven makes you see the black sun and die (coincidentally, this could be a great way of inserting Black Sun Deathcrawl-sidetreks…), but the caster also risks death on a failed save. Even on a success, the target has to stare at the sky – but not the caster…

The Nature of Blackness, All in Glass makes the caster emit light that will make targets on a failed save turn into horridly mutating and growing floods of exponentially-growing flesh, with a 2-in-3-chance of becoming blind, deaf and insane each. Looking away does help, but being caught in a flesh’s flood will result in damage and horrible scars. This is a delightfully gruesome spell, but fails to specify the extent of the affected target’s flood of growing flesh, which makes the spell not work properly as written. Bloody Roots imprisons a target below the earth, and has a tree grow from the cyst; fruit from the tree will open to reveal animals who speak of the imprisoned, but only to the young and lonely. At one point, the tree will split and reveal the formerly imprisoned, made anew. Dissolved in the Subtlest Middle Air is a campaign ender. The caster first gyrates spasmodically and painfully, and if the caster does not die, they turn into a glob of mutating material, growing with each target consumed, gaining ever more XP and powers – all to encapsulate the world and save it from the black sun. Alas, this once more does not codify the extent of spread/mass of the mutated thing – it’s a cool scene and angle, and I love the searing light vs. black sun leitmotifs in these spells, but this one, once more, needs to be more precise.

The second massive article is penned by Barry Blatt, who really excels at the quasi-historical early modern horror that many of the best Lamentations books sport. Here, we have essentially a fully depicted faction that comes with 4 fully statted NPCs, one fully-stated monster and a properly codified spellbook. The faction is super-easy to integrate into an ongoing game, and any referee worth their salt can craft a module by simply having the PCs encounter these folks. There even are a couple of read-aloud sections provided or you to paraphrase.

All right, to explain them further, I will have to go into SPOILERS. Potential players should jump ahead to the conclusion.

Okay, so “Van Steen’s Company” is, as the ‘zine properly contextualizes regarding history, a bit of an odd sight – we have a Calvinist mercenary company of uncharacteristically efficient and well-behaved  soldiers that seem to not be as fond of pillaging, murdering and/or raping as usual. They also set up camp a every Friday, and then only move again come Saturday dusk. Weird Dutch folk, right? Well, they are iconoclasts, but they are NOT Dutch – in fact, we have folks here that have managed to adapt Rabbi Loew’s writings – and unlike clay golems, which require whole congregations worth of prayer and magic, it turns out that people can be turned into obedient demi-golems, spell-ensorcelled terminator-like soldiers with devastating squad combat – you don’t want to face these head-on! Personally, I like to picture them as a combination of Solomon Kane and the Terminator, as a squad! And yep, the captain, magic-user, etc. are all statted. Are they good? Wholly vile? You decide. Love these!!

Editing and formatting are very good on a formal level; on a rules-language level, as noted, a few of the spells are less precise than the others. Layout adheres to a one-column b/w-standard with really cool original b/w-artworks. The pdf has no bookmarks, which constitutes a comfort-detriment – I strongly suggest printing this, or getting the inexpensive print version.

This installment of the “Undercroft”, more focused than the previous ones, benefits from sticking to themes – I was exceedingly pleasantly surprised by the esoteric-feeling casting tradition and delightfully grisly, ritualistic and yet, folksy spells. The faction/module-set-up by Barry Blatt is a highlight indeed and also represents a great little angle. While I wasn’t too keen on the short story, and while the rules of a few of the spells could have been a bit tighter, this is still a steal of a ‘zine if you even remotely enjoy horror. My final verdict will clock in at 4.5 stars, rounded up for the purpose of this platform.

You can get the print-version here in the Melsonian Arts Council shop!

Enjoying my reviews? please consider leaving a direct donation or joining my patreon. Every bit helps.