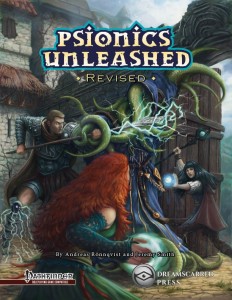 This Core-psionics-system clocks in at 236 pages, 1 page front cover, 1 page editorial, 1 page ToC, 1 page SRD, leaving us with 232 pages of content, so let’s take a look!

First of all: What is this book?

There are multiple answers to this question, the first of which would simply be:

The properly tidied-up, pretty version of the original Psionics Unleashed-book, with some added material.

To be more precise – this book contains the two new races of Forgeborn and Norals introduced in Psionics Augmented Vol. I. It also fully implements the talent-system introduced in Psionics Expanded (think of that book as the APG for psionics – just as good and just as distinct), thus fully integrating the one “patch” of the base rules that wasn’t 100% elegant.

This review will be a bit different from my usual in-depth analysis shtick, mainly since I have already tackled the classes and content in detail in previous reviews – and repetition is boring. As a general assessment, the 10 races provided can be considered rather well-balanced and diverse and provide fitting substitutes for the closed-IP-losses of some races from 3.X. It should be noted, though, that the races as provided herein do not sport favored class options, which are present in Ultimate Psionics – personally, I think that including those for the classes herein would have made sense.

The main focus of the book, and where it imho excels, though, would be the presentation of the base system of psionics as a point-based spellcasting system and, more importantly, the way in which this book makes what once (in 3.X) were boring, linear one-trick-pony-classes work properly – whether it is the wilder, soulknife or psychic warrior, the respective individual takes on the base classes greatly increase the diversity of builds available and overall, are easy to understand and execute – if you’re read the Paizo CORE-rules and the APG, none of these should provide a daunting task to understand.

Indeed, one can argue that the same holds true for the copious PrCs provided, which, while more linear than the base classes, arguably do mostly not suck – something I wouldn’t say about the PrCs provided for the CORE system. If you need advice on what to steer clear off: The Pyrokineticist still is very much unfocused and none-too-awesome and the telepathy-enslavement-specialist thrallherd can be broken by an experienced player; other than those two, the PrCs all have something unique and fun going for them.

Since you’re reading this review, I assume you’re not particularly familiar with the system, so let me give you a run-down: Psionics work pretty similar to spellcasting. You have your levels, governing attributes etc. Where things are different is with the resource. Psionic characters can be likened to spontaneous casters in that they need not prepare powers (that’s the name of the psionic “spells”) – unlike spontaneous casters, though, they draw their casts from ONE resource, the power points, which regenerate after resting. This is a numerical value that increases over the levels – to manifest a power (“Manifesting” being the term for psionic “spellcasting”), you need to expend power points. These are streamlined by level – level 1 powers cost 1 PP, level 3 powers cost 5 PP, etc. However, unlike regular spellcasting, quite a few psionic powers do not get automatic scaling – putting player-agenda higher on the radar, there is an augment-option for quite a few powers, allowing you to increase their potency in one way or another. To avoid abuse, a firm cap is placed on the amount of points you can spend on a given power. Know all those rants about psionics and nova-problems? Most of them boil down to not understanding this cap.

Psionic powers do not sport somatic or verbal components, instead providing displays – from odd smells to eerie lights, this component of the system deserves special mention because almost all reviewers tend to overlook it, when it makes imho for a cool, constant and subtle differentiation from regular spellcasting.

Psionics is not just spellcasting with a different flavor, though – it also extends to enabling people to do things beyond the providence of non-psionic creatures. Whether via helping to avoid death by poison via the new autohypnosis-skill or via one of the myriad ways in which one can use the psionic focus. This can be considered an infinite, yet limited resource: Basically, you can expend actions to gain your psionic focus and then expend it at a later time to fuel some thoroughly unique tricks. However, expending it always may not be wise either, for there are quite a few passive abilities that require you being focused. It’s simple, concise and fun.

It should be noted that this pdf does an excellent job at explaining the various different concepts in a very concise and easy to grasp manner – basically, if you understand basic PFRPG, you’ll get how this works and a handy glossary at the end makes looking up terminology very easy.

One crucial difference from the Ultimate Psionics-book would be the inclusion of a base array of psionic monsters to harass your players with -while obviously not reaching the level of depth the and breadth the Psionic Bestiary does, it does provide a solid first glance and some nice drag-and-drop adversaries. Whether you prefer monsters in a book that will be used by players or whether you prefer them in their own book depends on taste, but I personally prefer them separate and thus consider the Ultimate Psionics/Psionic Bestiary-combo superior.

Editing and formatting are top-notch, I noticed no significant glitches. Layout adheres to a beautiful two-column full-color standard and the pdf comes fully bookmarked for your convenience. The copious amounts of gorgeous full-color art render this a beautiful pdf indeed – and a huge step up from the admittedly pretty ugly original Psionics Unleashed.

Andreas Rönnqvist and Jeremy Smith (with additional design by Philip J. Leco II) are considered the fathers of PFRPG psionics – and for a good reason. Not only did they vastly enrich my 3.X games back in the day, their psionics for PFRPG are as close to a cross-publisher industry-standard as one can get with a subsystem. There is a reason for that.

Psionics RULE. I love them. I love the system. I love the flair. I love psionics. There’s a reason Ultimate Psionics is on my EZG Essentials-list as one book ALL of my campaigns use. Conversely, Ultimate Psionics, as massive a tome as it is, probably makes for a significant investment and, since it covers Psionics Expanded and the advanced options from that book, can seem overbearing. Think about a book that sports the mechanics of both the CORE-rules and the APG for a fitting analogy of what Ultimate Psionics does – beyond providing a huge amount of material to digest, the complexity of the rules utilized vary between material from Psionics Unleashed and Psionics Expanded – the latter, obviously, imho sporting the more interesting classes and options, but also requiring more system-mastery that can be daunting for players new to psionics.

This is where this book’s raison d’être can be discerned: This is essentially the CORE-book sans frills: The fancy, complex material is left for the other books and we get an inexpensive way to take a look at the basic system and material and dip one’s toes into psionic waters.

Basically, this is “My first psionics sourcebook,” an easy, all-encompassing way of taking a look at psionics and integrating its basic classes, races, items, etc. and ideas into your game with needing to buy the glorious, massive Ultimate Psionics and the Psionic Bestiary. Yes, you don’t get the favored class options and the more complex classes from Psionics Expanded, etc. in this book, but you get all you need and the presentation and layout make grasping the rules pretty simple.

While my firm recommendation for players and DM with some experience under their belts would still be to get the combo of Ultimate Psionics + Bestiary, in case you’re looking for an easy one-book-and-go way of using psionics, this should make for a great way of judging whether you like the system or not. (Note: If you want more complexity, the other books do provide that!) Especially groups and players with less experience regarding subsystems and the like can consider this book a nice way of getting to know how psionics work. Conversely, groups that already have Ultimate Psionics have no reason apart from the copious artworks to get this book.

How to rate this, then? I consider this to be a good introduction/core book for psionics, one specifically targeted at an audience who is not yet that familiar with psionics – as such a book, it accomplishes its task in a formidable manner and deserves a final verdict of 5 stars. Why no seal of approval? Because I’m a sucker for complexity and still croon over Ultimate Psionics when no one’s looking. ;P Kidding aside, I do believe that the aforementioned PrCs could have used the chance at streamlining and inclusion of favored class options would also have made sense to me. Still, consider this a testament to how good Ultimate Psionics is – and if you like this book, you’ll love its bigger sister!

You can get this great psionics-starter book here on OBS and here on d20pfsrd.com’s shop!