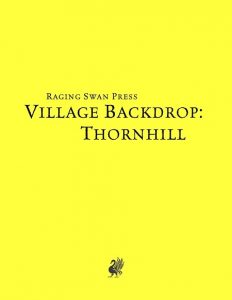 This installment in Raging Swan’s Village backdrop-series is 11 pages long, 1 page front cover, 2 pages advertisement, 1 page editorial, 1 page SRD, 1 page back cover, leaving us with a total of 5 pages of content for the village of Thornhill, so let’s take a look!

The village of Thornhill is situated at the border of a vast marsh, to be more precise on an island encircled by deep, sluggish waters and surrounded by an ancient, yet formidable stockade of old timbers – the only access point to the village being one bridge. At least without access to boats!

We get 8 short entries of notable folks, describing the dramatis personae of the village before we’re introduced to 10 notable locations in the village. It should be noted that a lizardfolk cleric living at a nearby island is considered to be a part of the village as well as a guardian of what the lizardfolk consider to be a holy site. A general note on features of the village, its worn wooden causeways and palisades can also be found in the book

To add further color to the dreary place, we also get a table of 6 rumors, a general primer on how the people look like (including nomenclature) and some pieces of local lore on the village before we are introduced to more detailed descriptions of the 10 notable locations of the village. A locally brewed paste that helps keep some of the less nice inhabitants of the swamp at bay has been included in the deal and information on the surrounding areas, like the red fern barrows, complement the pdf.

Editing and formatting are top-notch and up to the almost flawless track-record RSP has set for itself. Layout adheres to the crisp b/w-2-column presentation we’re by now accustomed to and the pdf comes with two versions – one for printing and one for screen-use. Both pdfs are fully bookmarked. Cartography, as always, is excellent and b/w.

All right, first of all, I feel obliged to note that this is a perfect example of concise writing – with just a couple of sentences, the village’s descriptions manage to evoke a sense of backwardness, desolation, decrepitude and forlornness. Thornhill is a harsh place and one that may erode the minds of those unwilling or incapable of bearing the hard life there. The subtle winks and nods towards the ever-present threats of the nearby swamp, via lizardfolk etc., could be easily used by a halfway-decent GM to create a delightfully dreary, slightly xenophobic settlement.

One of the downsides of this particular village would be that the map has been featured in some other books, so if you’ve used it already…well. At the same time, the writing is excellent. So, is this worth the low asking price? Yes. Yes, it is. Thornhill remains an evocative, fun settlement in its system-neutral iteration and while it may not be the apex of the series, it is worth a final verdict of 5 stars – if you already have used the map in another context, detract a star.

You can get this evocative village here on OBS!