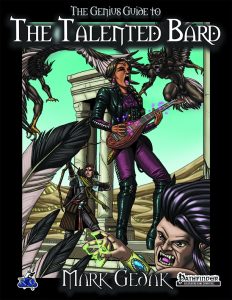 This installment of Rogue Genius Games’ Talented class-series clocks in at 38 pages, 1 page front cover, 1 page ToC, 1 page editorial, 2 pages of SRD, leaving us with 33 pages of content, so let’s take a look!

In case you’re new to the concept: Talented classes basically dismantle archetype abilities and base class abilities and codify them according to two categories: Edges for major abilities, talents for less powerful abilities. This does mean that you can cherry-pick exactly the type of class you want, but it also means that you need to be more proficient at creating classes.

Regarding progression, the talented bard begins play with 2 bard edges and 4 bard talents. An additional bard edge is gained at 4th level and every 3 levels thereafter. Each level that does not grant a bard edge nets a bard talent, with 10th level netting one in spite of also granting an edge – probably since it unlocks advanced talents. 2nd, 6th, 14th and 18th level provide two bard talents instead and 20th level provides the choice of the capstone grand talent.

In an uncommon change from the standard established, there is one ability beyond edges and talents hardwired into the very class, namely bardic performance, with 4 + Cha-mod rounds, +2 per level beyond first. Starting a performance is a standard action, move action at 7th, swift action at 13th level. The talented bard begins play with the distraction performance, allowing for the substitution of the Perform check result for saves versus pattern and figment illusions.

Spellcasting is gained via an edge: The first time it is gained, it grants 2 1st level bard spells (Cha being the default attribute to govern spellcasting). In order to advance spellcasting, the talented bard must expend additional edges, with 4th level, 7th level, 10th level, 13th level and 16th level thereafter allowing for the access of new bard spell levels. Somewhat odd: Cantrips are their own edge and are not a prerequisite for 1st level spellcasting. Expanded spell lists can be gained via e.g. the arcane investigation edge of the detective. Learning a masterpiece also is an edge and similarly, the dervish dancer’s battle dance is also an edge. Similarly, taking edges from other classes at -3 levels is an interesting synergy edge, but one you pay for dearly.

Thankfully, the pdf continues to sport the by now classic “Save vs. wall of text”-table that classifies the vast array of talents according to general themes, helping you choose talents.

Now you may notice one thing from the above – if you compare the talented bard with the regular bard + archetype, spellcasting is more costly for the talented bard: For a proper, full progression in this discipline, the class loses almost all of the respective edges. That being said, I do believe that this is very much intentional: Why? Because, let’s face it, most archetypes feature some unique performances that double as the primary reasons to take them – this pdf does not take the same route as the talented cavalier – the respective performances do not retain linear sequences and instead opt for minimum level requirements to retain balance, allowing for more freedom in choices when directly compared to archetypes of the base class.

After tinkering for a while with the engine, I do believe that, to a certain degree, this flexibility to cherry pick powerful performances (and accumulate more performances than you otherwise could) is balanced against the spellcasting progression being more costly. In short – I’m fine with it.

Editing and formatting are very good, I noticed no significant glitches. Layout adheres to Rogue Genius Games’ two-column full-color standard with a grey background and pretty broad borders, but also small text – so yes, there is a ton of content in here. Slightly odd: There are some sections of text that look like they are slightly bolder than others. The pdf comes fully bookmarked for your convenience, but does not have individual bookmarks for the edges/talents, which means you’ll do some scrolling. The pdf sports numerous full-color artworks, which mainly are stock and do not adhere to a unified aesthetic…but, oh well.

Mark Gedak, master of Purple Duck Games, doesn’t write that many books any more – which is honestly a pity. Actually taking the time and effort required to make a talented book…is still something I admire. There is so much work going into these books and honestly, I wouldn’t want to design one – in my mind, they are WORK and while I can picture some designers enjoying this…personally, I wouldn’t. The Talented Bard as depicted herein was a pretty neat surprise for me, as it actually does feature some interesting balance-mechanisms for the added flexibility: If you’d only go for one archetype, the core bard and the old archetype may actually be better for you due to the spellcasting balancing; at the same time, if you do want to cherry pick via talents, you’ll lose a bit in the edge-based department.

Now there is one thing that I’m not 100% sold on here: Masterpieces as edges. Bardic masterpieces are notoriously swingy regarding their power and accessibility; while some may justify an edge, others don’t. Their cost hasn’t been properly translated to the talented system, which is a pretty big deal to me. The ideal solution would have probably been dismantling them and translating them into talents and edges, but I guess you can’t have everything. In the end, the talented bard is a purchase that certainly is worth the asking price, though it falls slightly short of the perfection it could have been. My final verdict hence clocks in at 4 stars.