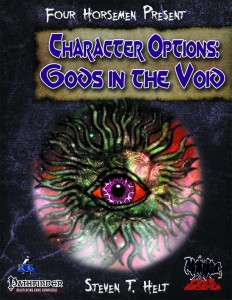 This installment in the Four Horsemen present-series clocks in at 12 pages, 1 page front cover, 1 page editorial, 1 page SRD, leaving us with 9 pages of content, so let’s take a look!

This pdf kicks off by codifying classic Lovecraftian deities via minimalistic deity-write-ups: I.e. alignment, domains, portfolio and favored weapons, but no additional inquisition/sub-domain-information, with Azathoth, Nyarlythotep, Azdan and Shamash getting their due.

A total of 6 new traits are provided, allowing you to be the lost prince of an alien planet, the option to incur Wisdom damage to increase CL by +1 when casting compulsions or phantasms – the traits provided actually manage to do unique and interesting things and sport rather nifty ideas and flavor -as a minor complaint, I could complain that the traits themselves are not codified as trait subtypes, but honestly…they are functional and interesting, which is the most important component here.

Beyond these traits, the pdf also sports archetypes. Cult defector rogues get a modified skill-list and replace trap finding with scaling Knowledge-bonuses. At 8th level and thereafter, they can gain bonuses by seeing omens: +4 to initiative, +4 skill and ability checks or +2 to AC, 1/day, activated as a move action, lasting until the end of the encounter (not a fan of per encounter abilities since they pertain to a non-codified timeframe—but by now you know my old rant on that subject).

The Envoy spiritualist replaces a regular emotional focus, binding alien spirits that are a bit strange – they are called menaces: They gain HD ranks in Diplomacy and Intimidate and gain Skill Focus in these skills while confined to the envoy’s consciousness. They have good Fort- and Will-saves and Improved Initiative as a bonus feat, conferring the bonus to the spiritualist while within the character’s consciousness. The slam attack of the spirit receives the benefits of Improved Critical feat and at 7th level, they can activate a 10-ft.-aura as a swift action that provides a no-save -2 AC and atk-aura. At 12th level, these spirits can fire a 60-ft-range-increment ray that basically extends the melee slam to range. 17th level autoconfirms critical hits. Overall, a solid, nice spirit.

The reckless hero gunslinger receives UMD as a class skills and is locked into a blunderbuss at 1st level, modifying gunsmith. Gunslinger’s dodge is replaced with the fake it deed – they may cast spells from spellbooks via UMD as though the books were scrolls, at the cost of 1 point of grit. Now the interesting thing is: If you botch, you roll on a d8-table, with all but one effect being rather unpleasant – alignment shifts, suddenly conjuring forth monsters, curses…ouch! At 2nd level, the archetype receives a scaling DR versus weapons and natural attacks, but only while wearing light or no armor. Nihilist oracles replace their cure/inflict spells with a rather powerful and interesting bonus spells. At 7th level, nihilists must take the Viability revelation, which grants 10 fire and cold resistance as well as 4 x Con score rounds of holding breath as an immediate action, while also granting immunity to low pressure and vacuum. At 11th level, that increases to 20 and takes away the requirement to breathe and yes, you may continue to speak/cast spells. This may be used for class level minutes per day, used in 1 minute increments.

The Visitor druid gains all racial traits of the usual race, but loses those granted by monstrous or non-humanoid races; at 1st level, they choose 2 RP worth of racial points, allowing them to gain or lose them at will as a standard action either all or just a couple of them, even while in wild shape. Advanced or monstrous traits may not be selected, with 4th level and every 4 levels thereafter gain +2 RP. The traits may be re-allocated every level and replaces nature’s bond. At 13th level, the class affects a 40 ft-radius, making it difficult terrain, increasing or decreasing wind force or modify temperature – permanently and dismissible. Awesome, cool ability!

Next up would be 5 new feats – whether a feat that helps versus environmental hazards, better UMD /at the cost of Wis-damage), summons with frightful presence and immunity to mind-affecting effects and a secondary tentacle attacks, a spellbook with bonus spells and unlimited pages and +50% range rays, the feats per se are interesting, though the ray range-increase is VERY nasty in the right hands: I’d suggest very carefully contemplating whether or not to allow this one in conjunction with warlock-y blasting classes – granted, the effect pertains only spell-based rays and thus should work in most contexts – I don’t complain here, but felt obliged to mention this.

The pdf also sports 6 new spells: Whether high-level black holes, essentially a lesser version of a wall of force, interstellar travel, temporarily adding brilliant energy to weapons or ammunition, instilling hostility in foes or a sunburn debuff – they are interesting.

Editing and formatting are very good, I noticed no significant glitches in the formal or rules language. Layout adheres to the 2-column full-color standard and the pdf sports some nice full-color artworks. The pdf comes fully bookmarked for your convenience.

Steven T. Helt’s collection of options generally can be considered a thoroughly well-crafted supplement – the material herein is balanced, fun and solid and all gripes I can muster against it pertain aesthetics and minor hiccups that in no way impede the functionality of this pdf. That being said, at the same time, I wasn’t completely blown away by this pdf. In the end, my final verdict will hence clock in at 4 stars – a good offering.

You can get this nice pdf here on OBS and here on d20pfsrd.com’s shop!