Beneath the Festered Sun

Beneath the Festered Sun 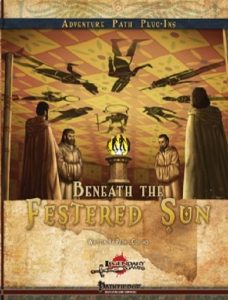 The module is a sandbox investigation that can be inserted before the final act of the first installment of the Mummy’s Mask AP, which is a sound decision – one of the criticism voiced against said module is its unbroken sequence of dungeon crawls. But can this module really bring the desired change o pace?

All right, still here? Great! Groomed from an early childhood to serve as priestess of the goddess of death, the individual called Kapanek developed her own profound beliefs, a variation, a heresy of the doctrine followed by the majority of people in ancient times – unfortunately for her, her own talent would prove to be her undoing, as a being that looked somewhat akin to a skeletal herald of Anubis manifested – her eidolon, mistaken for a divine herald. Her heresy continued, she gained influence via a prestigious marriage…but then, a dread plague struck and was all her foes required to take her down and slaughter her family. Her death curse unfulfilled, the world has turned…but her eidolon has schemed for a long time to fulfill the vengeance of its mistress.

As the PCs return to delve once again into the dungeons, they are notified of the ruins being closed since civil unrest and the rare astrological event “Festered Sun” is happening. From the get-go, the module offers a significant assortment of options to gather information, with higher checks providing more knowledge. The PCs (and other parties) have a vested interest in resolving the unrest, since a local inquisitor is quick to point his finger at the tomb-raiding groups as a possible source for the issues. In order to find the truth behind the strangely powerful curse – Ruja, the man in charge, offers 3 venues to start the investigation. For one, the Anubian sects that follows lost and forgotten Kapanek’s doctrines needs to be inspected; secondly, the astronomer Gyep tried to warn the city, but was laughed at – so checking him out may help. Finally, the is an odd mirage surrounding Mafiris Estate that should most definitely be investigated. Choosing their entry vector, the PCs receive a court order exempting them from the curfew.

Stepping outside and looking up at the festered sun can cause blindness, as a strangely compelling curse seems to affect the very city and exposure to daylight may similarly cause burns via another curse (yep, that is a preview of the curses that will feature in Mummy’s Mask #3) – in a rarely seen level of detail, the precise wording of the curses uttered has been reproduced, which is pretty awesome, at least in my book. In the camp of the Anubians spawned from Kapanek’s teachings and the PCs are generally welcomed to the camp of the heresy, though in the shadow pavilion, the metal globe with the silhouetted shapes of ancient gods (see cover) is interesting…and the leader of the sects, one brother Thute, seems to be less than pleased with the meddling PCs. As the investigation winds down here, a shadow will assault the PCs – which is taken by the locals to be an unfettered aspect of the soul (the 5 aspects of the soul as defined by Kapanek’s teachings are explained in detail) -it is also said belief that may put an end to the dread curses…but so far, the PCs don’t yet know that.

The PCs may actually witness an abandoned cistern defended by rather aggressive crowds of people that guard a woman of blood: Partaking from her blood seems to eliminate the curses…but drinking human blood from the strange apparition does have its own risks – the PCs will have to take a close look at the abandoned cistern’s insides and deal with whatever lurks in its tainted depths.

The temple of Pharasma, which hands out alms and bread, may well be a source of the issues – and indeed, stealthy gremlins have been switching breads, spreading dread contamination among the inhabitants of the city.

Slowly, the pieces start falling in place and the mirage-covered Mafiris estate may be the most lethal of the respective areas -inside this planar bubble, the PCs can actually meet Kapanek’s tainted, reincarnated form…and whether they can get some information out of her or not, in order to save an old woman who does know more, the PCs will probably have to deal with the lethal creature that once was Kapanek.

Editing and formatting are top-notch, I noticed no significant issues pertaining rules-language or formal criteria. Layout adheres to Legendary Games’ two-column full-color standard and the pdf comes with copious pieces of artwork, all in full color. Legendary Games fans may know some of them from other books, but not all.

Pedro Coelho’s “Beneath the Festered Sun” is a fantastic addition to Mummy’s Mask. This module represents a great change of pace from the constant dungeon delving, adds social interaction and some non-linear sleuthing to the AP and, beyond that, sports a truly evocative array of visuals: From the curses to the places visited, this very much breathes this ephemeral spirit of Swords and Sorcery; this module would work well in the Hyborian Age, Gygax’s Khemit or similar environments – the overall aesthetics and themes utilized are captivating, unique and fun. The mythology evoked resonates well with concepts of our very own ancient cultures…and I should not fail to mention that the author also seems to be a truly superb cartographer: Absolutely gorgeous full-color pieces, both with keys and key-less versions, are provided for GM and players. The quality of the cartography is glorious and fits, theme-wise, perfectly into the context of Mummy’s Mask.

So, to recap: This should be considered to be a must own addition to Mummy’s Mask, as it provides a great change of pace; the production values are glorious, the writing is precise, the supplemental information copious. I read this but once and ran it without any hassle and the guidance for GMs less accustomed to prolonged social interactions between PCs and NPCs further helps in establishing this as a great, evocative module. In the end, the AP is significantly better with this module included; this ranks as one of the finest plug-in modules LG has put out so far. My final verdict will clock in at 5 stars + seal of approval.

You can get this great module here on OBS!