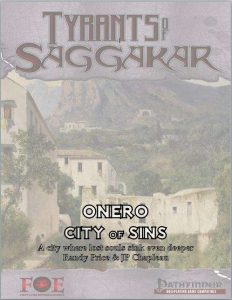 This supplement clocks in at 25 pages, 1 page front cover, 1 page editorial/SRD, 1 page ToC, 1 page advertisement, leaving us with 21 pages of content, so let’s take a look!

Now, this supplement is situated in the Tyrants of Saggakar setting, which is intended as a vehicle for a “living” campaign. The setting has evolved out of the concept of LPJ Design’s NeoExodus, but has its very own theme and atmosphere. That being said, you don’t have to participate in the living campaign to make use of this supplement – what we have here is, in essence, a city, or rather, town backdrop of sorts. The city also serves as the backdrop for the “Paths to Ambition”-sequence of adventures, but for the purpose of this review, I will focus on taking a look at the general usefulness of the town. It should be noted that slavery and servitude and the massive control exerted by the First Ones serves as a central focus of the setting, as a sort of leitmotif – Onero, contrasted with that notion, is a city sans master, one that, in the tradition of many a den of vice, is shackled by the vices and freedom, by the decadence it breathes and requires to sustain itself.

Onero, obviously, is name-wise, smart as a choice, evoking both Nero and onereic connotations, and indeed, this dream-like haze constitutes a central leitmotif of sorts for this den of sin. We begin the supplement proper with a breakdown of the city, commenting on details like currency, imports, military, etc., and also sporting a settlement statblock. With the populace rather self-absorbed and uncaring, the alignment of the town is stated as CE, though its not the demon-worshipping type, but rather the uncaring “everyone for him/herself”-attitude that makes this den of sin a tough place to live in.

We also get a brief history of the city, which contextualizes Onero within the context of the setting, but as noted before, adaption is pretty simple. The vicinity of the town is also described, mentioning peaks where erstwhile prisons may now languish without master, Cinder Valley, eternally warm, where fabled Saggakar ostensibly came to the world, burning eternally. A sinkhole and a canyon faced by strange fortresses, dubbed the “unblinking sentinels,” complement a rather fantastic and interesting environment to situate the city.

Onero has three main gates and is dissected by the massive Markhem River, which also lends the name to 4 of the 7 districts of the town: North- East-, West- and Southbank are 4 of them, with food court, park and lecher’s ward being the others. The city comes with a rudimentary map, with districts color-coded, but remains, in that component, rather focused on broad strokes. There is no player-friendly extra version of the map per se. Each of the districts then proceeds to get its own write-up, with rulers noted and sites of interest briefly mentioned. These have not been noted on the map provided, so you’ll have to place them yourself. From fabled smiths to freak shows and gambling halls, the city sports all the illicit entertainment you could desire. Personally, I enjoyed that the most wealthy district, Northbank, sports gaslight, implying a level of progress more akin to the Victorian era than to the default medieval standards, something mirrored in points of interest like the museum of vanities The fact that there is a whole district devoted to the vices of the flesh also underlines a latent fin de siècle feeling, something I very much like – ruined abbeys now turned to drug dens and the like add further to the leitmotif of decay and decadence.

The pdf then proceeds to talk about the social strata of the city; the differences to the rather oppressive truths of the setting are noted here. The pdf then proceeds to introduce us to 15 movers and shakers in the city, with gender, race and class, if any, noted. However, neither class levels to gage relative power, nor stats are provided for these beings. We also learn briefly of outside influences that tamper with the city and proceed to discuss adventure locales: There is a cavern that spirits folks into the Mists (cue obligatory Ravenloft reference); a fortress that acted as a gargoyle nest, and now, with the gargoyles purged, houses a potent oracle. The cemetery of the city is maintained by the church of Sanlys, requiring gold to prevent the selling of corpses as undead. We also receive a whole page of various adventure hooks for you to develop, and the final page of the supplement is devoted to a new creature, the prickle, also known as the porcupine-rat, a rather dangerous form of vermin that is rather common in the sewers of the city.

Editing and formatting are very good on a formal and rules-language level. I noticed no undue accumulation of hiccups. Layout adheres to a two-column b/w-standard, with the company’s logo in the background, the colored header at the top of each page. Interior artwork is a blending of public domain artwork and stock art – personally, I preferred the public domain pieces. The cartography is okay, but the lack of points of interest noted makes it less useful than it should be. The lack of a player-friendly version is also a bit of a pity. The pdf sports a pretty big downside, comfort-wise: The pdf has no bookmarks, making navigation less comfortable than it should be.

Randy Price and JP Chapleau present a city that I consider, per se, really cool. – the city has a strong leitmotif, and while I would have loved to see a tighter focus on adventures within the city, rather than in the vicinity, the material provided is per se intriguing. I enjoy the premise, and the writing is well-crafted, managing to evoke and eclectic and concise atmosphere. At the same time, the formal criteria like cartography and the puzzling lack of bookmarks drag down the rating of this supplement.

Onero, in spite of its per se concise atmosphere, also feels a bit less alive due to the broad strokes approach: While I know a lot about the power-structures and key locales of the city, I have a harder time picturing how the experience of actually walking down one of its streets would feel. Here, e.g. Raging Swan Press’s supplements, with their abundance of notes on sample events, local color and the like, offer the more compelling and immediately useful material. Similarly, neither local nomenclature or, dressing habits, street names, etc…. you know, the small bits that make a place come truly alive, are really discussed, and the prominence of the river intersecting the town could have been developed further. On the other hand, the city as a whole comes at a very low price point and offers captivating prose and cool ideas for the price point. How to rate this, then? Well, for me, this city represents a captivating location, though one that doesn’t manage to realize its full potential. While I’d usually round up from my final verdict of 3.5 stars, the comfort detriments, in particularly the lack of bookmarks, force me to round down instead.

You can get this interesting city here on OBS!