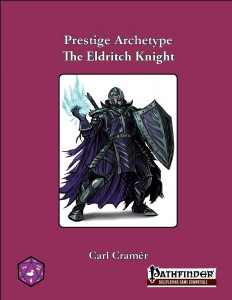 The Eldritch knight base class as provided herein received d8, 3/4 BAB-progression, good fort- and will-saves, 2 +Int skills per level, proficiency with simple and martial weapons and all armor and shields, though they retain arcane spell failure chances. They also may cast prepared arcane spells of up to 9th spell level via int from the sorc/wiz list. The class counts as both fighter and wizard-levels for the purpose of level requirements. At 1st level, the eldritch knight also has to choose either an arcane school or an arcane bond. At 3rd level and every 3 levels thereafter, the eldritch knight also receives a bonus feat that can be selected from item creation, metamagic, combat etc. -and arcane discoveries. The latter option makes me swallow somewhat, due to an increased frequency of bonus feats when compared to that of the wizard and thus also an increased array of arcane discoveries.

Spellcasting-wise, the class starts with1 cantrip and 1st level spell, but increases the amount of slots per day slower than the wizard, losing about 2 levels of spells gained over the 20 levels of the class on the non-martial brethren. The signature capstone spell critical of the base PrC is gained at 15th level – alas, without fixing it. The ability still allows you to cast multiple round spells, full-round action spells etc. as one swift action when criting – which is broken in my book, even at this level..

The pdf also provides favored class options for the core-races, all of which are solid -and as courtesy to us DMs, we receive NPC-builds of an eldritch knight for levels 1, 5, 10 and 15 – kudos!

Now beyond that, the pdf also provides advice for players – extensive advice, to be precise, to deal with armored spellcasting and ways to make it work – pretty cool and nice, especially for less experienced/rules-savvy players!

Carl Cramér has done mercifully a job beyond what was required; The base Eldritch Knight PrC is utterly bland, sans identity and some would argue, bad – qualifying for it sucks and it does not provide any cool, unique tricks to pull off beyond somewhat solid melee capacities and 9/10 spellcasting progression. The translation into a full base class thus can’t be faulted for being not particularly awe-inspiring. It does manage to adequately make the class both melee and caster at first level, though, and that without utterly outclassing the wizard colleagues – which is a good thing. The general take is more streamlined than the PrC and the option to take arcane discoveries helps bring the class somewhat closer to current Pathfinder’s rule-aesthetics as opposed to the beginnings of the system.

Now as you may have noticed, I do not like the base PrC. In fact, I loathe it as an example of boring PrC-design that should have died a fiery death in the inferno that consumed 3.X. BUT, this is not about my personal preference; after all, I’m pretty sure that some of you like the class, perhaps prefer it over the magus. And as a reviewer, I have to respect that and at least try to provide an objective stance on this one – and it’s better than the base PrC. In spite of the meager base materials provided by the PrC, this one should be considered the superior take and perhaps even a class that has a reason to exist in current PFRPG, with the thankfully streamlined saves and refreshment making the concept seem less like a systemic anachronism. And for that, in spite of my utter disdain of the class mechanics this is based on, in spite of the still flawed spell critical, I’ll have to rate this 4 stars. Congratulations, Mr Cramér – I don’t often get to rate a product this strongly against my own personal inclinations.

You can get this nice take on the Eldritch knight here on OBS and here on d20pfsrd.com’s shop.