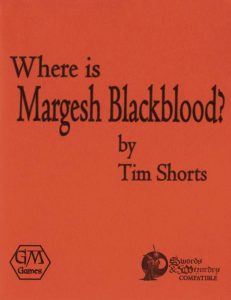 This adventure clocks in at 12 pages, 1 page front cover, 1 page editorial/introduction, leaving us with 10 pages of content, all of which are laid out in the classic 6’’ by 9’’ old-school standard. Got that? Great, so let’s take a look!

Now, this was originally submitted to the One-Page-Dungeon-contest and seems to have done well there. Anyways, the adventure is basically a combination of 4 different hideouts, with 4 rooms each. The hideouts all come with basic cartography done in paint, which may not be too aesthetically-pleasing, but it does the job and the maps specify the respective grid – so already something that many maps fail to do.

Formatting-wise, monsters and enemies are bolded, and penalties to atk due to being drunken etc. are noted. Rules-wise, we get S&W, with ascending and descending ACs noted. The module seems to assume a silver standard. Spells and magic items are not italicized.

Now, the module does not sport much in the way of a story, so the SPOILER-warning here is somewhat tentative. Still, if you don’t want to know about some details, skip ahead to the conclusion.

Only referees around? Great!

The module comes with a random table to determine in which of the 4 hideouts Magresh is hiding – house in town, hunting camp, hill fort or ruin tower. Now, it should be noted that Hill Fort and House in Town should probably be only chosen for characters level 2+, since both locations contain a leveled and rather potent lieutenant of Margesh, significantly increasing the lethality of the encounter with the fellow. Margesh himself is btw. a 6th-level character and may well kill off a couple of PCs if they are not up to their A-game. You should be aware that the lieutenants all have magic items, and Margesh himself has no less than 3 plus potions – his sword in particular is pretty potent and requires a quest to use, but renders immune to “mind magics” – I wish that had been codified in a tighter manner.

Editing and formatting are okay – I noticed a few deviations and minor typos. Layout adheres to a no-frills one-column b/w-standard that makes the pdf rather printer-friendly. Cartography is done in a no-frills and functional manner, but no player-friendly versions of the maps are provided. The pdf has no bookmarks, but needs none at this length.

Tim Shorts’ mini-adventure here is an unpretentious, hard little sidequest. It doesn’t offer much in the ways of story or fluff, but it does its job of being a sidequest sans frills rather well. Compared to his mini-manors like the inspiring “Faces without Screams” or “The Flayed King”, it does feel a bit barebones and lacks the unique, small tidbits that made these stand out. This may be a feature rather than a bug, though: You can pretty much integrate this module into any game without any headaches. At the same time, I found myself wondering why I’d do that. GM Games’ Manor-zine sports a ton of superior sidetreks, and while the PWYW-angle is helpful to sell it, master Shorts has penned more interesting adventures. That being said, there is a use for this: If you’re caught red-handed, need a diversion or just want a few minor outlaw hideouts to scavenge, then this has something waiting for you. That being said, I still maintain that a few more unique angles would have helped the module. Still, you may wish to check it out and, if you like it, leave a tip – it’s worth having in one’s arsenal, and the PWYW-nature of the module makes that a risk-less proposal. My final verdict will hence clock in at 3 stars.