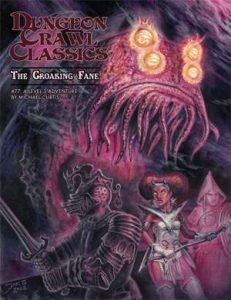 This module clocks in at 20 pages, 1 page front cover, 1 page editorial, 1 page advertisement, 1 page back cover, leaving us with 16 pages of content, so let’s take a look!

All right, so this is a dungeon-crawl designed for 6 to 8 characters of 3rd level.  The party should be well-rounded, and contain a thief, means to deal proper damage in melee and at range, etc. – you get the idea.

The module is in the mid-tier regarding danger faced as far as DCC is concerned; i.e. it is a deadly adventure, but one with fair challenges, and one that emphasizes player-skill over character skill. Smart roleplaying is more important than just rolling well. As always, we have proper read-aloud text for every location, and the module comes with a massive, one-page handout of area 2-10’s scenery; oddly, the text of the module does not exactly state explicitly for which area the handout is intended, but it’s obvious from the context. We get pretty impressive b/w-artworks of the dungeon, but no player-friendly versions, which is a bummer.

…I freely admit that I wouldn’t have reviewed this module, were it not for my patreon supporters. Why? Because I’ve analyzed so many frog-themed dungeons, I have become pretty jaded regarding them. Still, a request is a request, so here we are. Theme-wise, we have a frog-themed dungeon, and one that adheres to a well-executed dark fantasy aesthetic.

All right, only judges around? Great! So, the module begins with a pet-peeve of mind, namely that it nominally introduces not one, but two massive secret organizations that your world now suddenly has to incorporate if running this as written: The two competing frog cults of Schaphigroadaz and Bobugbuliz. Schaphigroadaz’ followers, the Salientian Knot, grew lazy and were subverted by Bobugbuliz’ servants – but instead of being destroyed, they went into hiding…and Bobugbuliz and his clergy repeated the unwise decisions of their forebears, growing lazy – and thus, the rise of the Salientian Knot is imminent, as a war of evil frog/toad-cultists wrecks the underworld.

The PCs are exploring essentially one of the lost temples of Schphigroadaz, and have a chance to prevent his followers from returning to power. The PCs thus further the goals of Bobugbuliz or simply help exterminate one small chapter in a much larger bid for re-emergence in this module.

…nobody needs that. I am not adverse to lore; I love it. When it MATTERS. Here, though? I’ve rarely seen a backgroundstory so anti-conductive to making me implement a module in my game. The lore here not only makes the PC’s efforts matter less (they only deal with one tiny enclave of the grand toad war), it also forces you to include a meta-plot of two competing factions that is not particularly exciting.

Thankfully, none of this lore is actually relevant to playing the module in any way, shape or form.

Evil frog-temple there, go pillage/explore, escape alive. Bam, done. All that humbug with competing frog gods? It’s superfluous at best. Make it a small cult, have the PCs clean it up and feel good about having stopped the cult, done. That’s all the PCs need to know, and no, the lore does not feature in the challenges to a significant degree.

Anyhow, let’s take a look at the dungeon: While the entry is shaped like a frog’s maw, the interior of the first dungeon-“level” is actually shaped like church, with transepts, nave, etc. – and there is a lot going on here: If this was a point and click adventure, there’d be a lot of “interaction points” here – each transept is its own keyed location, and from sarcophagi to sacrificial pits the PCs can open (hinted at, so no, this is not an invisible-line pit trap!) to toad-goyles to a fountain that hides flesh-eating tadpoles, there is a LOT to be done here – this is a fantastic example on how to make a very dense area full of adventuring. Better yet, the challenges posed here, while also featuring fights, take great pains to reward clever roleplaying – in that way, this is easily one of the best such areas I’ve encountered in quite a while.

Add to that the at times grisly imagery, such as a cursed man spawning a flood of flesh-eating toads, and we have a module that, theme-wise, could be just as well run in Lamentations of the Flame Princess without breaking the theme. In fact, this module is superior to the author’s church-based encounter area for that game (“A Single, Small Cut”),

After the party has managed to brave the darkened temple, they will have to make their way into the undercroft, where the more hidden rites and aspects of the strange sect are on display – these include, for example, unholy texts that can infest the reader, mummified toads and more. The density of interaction spots slightly decreases here. But yes, this undercroft includes a massive subterranean pond, where the handout mentioned previously comes into play: A vast amount of giant toads can easily make this a super-lethal battle royale: If the PCs are smart, they can use their environments, and if they explored the complex well so far, items can help as well. The PCs may find a particularly unpleasant cultist left behind (who seeks to goad the PCs into helping him reach the spawning pool), and ultimately find the pool where the Salientian Knot is currently undergoing metamorphosis – slaying the mutated frog-cultists ends the adventure, right?

…nope! There is a deadly toad thing hidden below, for an extra challenge! So that ends it, right? Nope! Upon leaving with the hard-earned treasure, the stone toad idol in the church animates, the portals slam shut, and the party will have yet another boss on their hands! There are btw. a couple of instances of behavior or treasures found that can cause this to happen. Nice take on the multi-level “It’s not over yet!”-boss fight theme.

Editing and formatting are very good on a formal and rules-language level. Layout adheres to the series’ 2-column b/w-standard, and the pdf sports nice, original b/w-artworks. The cartography is excellent, as always, but the lack of player-friendly versions is annoying. The pdf comes fully bookmarked for your convenience.

I’m genuinely happy that I was asked to review this module, because it is easily one of the best frog-themed dungeons I’ve had the pleasure of running. The sheer density of things to do, the amount of viable, detailed interactions, is great. The fact that the combats reward clever thinking, and penalize simply waltzing in? Awesome as well. Now, as noted before, I genuinely loathe the lore and excessive background that does not meaningfully contribute to the module per se, but this can thankfully be entirely ignored. All in all, this is a great dark fantasy yarn. If anything, some more interaction, a means to save a doomed soul, a puzzle or the like – a few non-combat/non-trap-focused interactions more, and this would be excellent. As written, this is a very well-designed frog-themed dungeon, well worth of a final verdict of 4.5 stars, rounded up due to in dubio pro reo.

You can get this cool little anti-frog-crawl-adventure here on OBS!