The Genius Guide to the Wildshaper (Patreon Request)

The Genius Guide to the Wildshaper 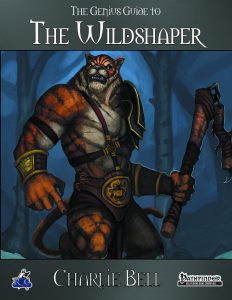 This pdf clocks in at 14 pages, 1 page front cover, 1 page editorial, 1 page SRD, leaving us with 11 pages of content, so let’s take a look!

This review was requested to be moved up in my reviewing at the behest of my patreon supporters.

The wildshaper class has d10 HD, 4 + Int skills per level, good BAB-progression (table lists no iterative attack values), good Fort- and Ref-saves and is proficient with simple weapons as well as light and medium armor and with all natural weapons of shapes assumed.

The wildshaper is, no surprise there, defined by shapeshifting – they can transform themselves into any Small or Medium animal for 4 + Constitution modifier rounds per day, with each additional class level attained increasing this by 3 rounds. Kudos: The rules here explicitly state that temporary increases do not influence the allotment of shapeshifted rounds per day. The daily allotment replenishes after the usual 8 hours. The wildshaper must be familiar with the animal form assumed and retains the ability to speak in animal form. At 3rd level, the wildshaper can retain shapeshift for up to 1 hour for a single round use of the ability, but only while not in combat. Okay, so, how does this interact with entering combat? Does the surprise round, if any, for example require the expenditure of a round of shapeshift? Does the first round of combat “use up” a shapeshift’s round previously initiated, or will combat result in the shapeshift “aborting” if no additional round is expended? This needs clarification. 5th level unlocks Tiny and Large sizes, 7th Huge or Diminutive – each also upgrade the benefits from the base beast shape I to the next higher version of the spell. Changing shapes is a standard action, and ending a shape is a free action. 9th level nets shapeshift as a move action, 13th as a swift action (both are optionally, thankfully – you can still shift as a standard action, if starved for swift actions!), and 17th level allows for the shapeshifting as a free action, even when it’s not the wildshaper’s turn. This explicitly allows for the shaping into a form with e.g. a higher Constitution modifier to avoid being knocked out, etc. At 11th level, the shapeshift is accompanied by an untyped +2 bonus to Constitution, and +2 to either Strength or Dexterity. Minor inconvenience: “Mighty Shapeshift” (gained at 19th level, upgrades Constitution-bonus to +4 and +2 to Strength or Dexterity, or +4 Strength or Dexterity) is erroneously referred to as “Greater Shapeshift” – the table has the name correct., though

This ability counts as wildshape for prerequisite etc. purposes. Speaking of which: The wildshaper counts class levels as druid levels for the purpose of qualifying for feats, traits, and the like that enhance or improve wildshape, and multiclassing is taken into account. The class also starts off with wild empathy.

At 3rd level, the class treats its natural weapons as magic weapons for the purpose of overcoming DR, with 5th level unlocking silver, 7th allowing for the choice of an alignment component; 11th level makes the attacks ghost touch, 16th adamantine. The capstone nets the shapechanger subtype, at-will shapechange and immunity to non-harmless transmutation effects.

The experienced reader will have noticed what I have not yet mentioned: At 2nd level, and every 2 levels thereafter, the wildshaper receives a wildshape talent: These include unlocking shapechanging for types ranging from humanoid (with alter self benefits) to e.g. plant shape or giant form shifts. These deserve special mention: The massive plant defensive traits are properly contained regarding minimum levels; the giant shape starts off as a modification of alter self accompanied by bonuses before graduating to duplicating the potent spell benefits. Kudos! The talents allow for save DC-increases of toxins, automatic wild armor property for armor worn, bonus feats, woodland stride, scaling boosts to saves vs. transmutation effects, terrain mastery…and a couple of unique ones: Quite a few of the talents allow for the expenditure of shapeshift to purge the body of e.g. poisons or diseases, swift action healing, very limited Charisma-based spellcasting. Interesting: The hybrid shape even gets the minimum level for unassisted flight in PFRPG right! So yeah, as a whole, we have a surprisingly precise class here!

As far as supplemental materials are concerned, we have 4 feats, two of which deal with the obligatory increase in shapeshift rounds, the Extra Wildshaper Talent; Polymorphic Impersonation lets you impersonate a specific target, while Wereblooded nets you scaling DR/silver. The pdf also contains 4 archetypes: The totem shaper specializes in a specific animal exclusively, and said form gains pretty impressive bonuses – these do seem to stack with the ones granted by the base class, making them too min-maxy for my tastes. The beastrager is the obvious barbarian/rage-engine crossover; the evolved wildshaper loses the talent engine and druid-y components in favor of evolution access (though that concept is represented more smoothly by a variety of classes). Finally, the graveshrouded is the engine/theme-tweak that focuses on assuming undead-shapes. This one is the most pronounced of the archetypes. The pdf also features favored class options for the core races as well as a variety of uncommon ones, ranging from the planetouched to kitsune, goblins, etc., the mantle of fluid shape item (which allows for uninhibited use of abilities while wildshaped, at the cost of a more serious resource expenditure), and the pdf closes with a discussion of how to implement these fellows in your campaign.

Editing and formatting re excellent on a formal level; on a rules-language level, I only found the one hiccups I mentioned above – huge kudos. Layout adheres to Rogue Genius Games’ old two-column full-color standard, and the pdf offers a couple of rather nice full-color artworks I haven’t seen before. The pdf comes fully bookmarked for your convenience.

Charlie Bell’s wildhaper was a pleasant surprise for me. While the author has contributed to Jon Brazer Enterprises’ excellent “The Gilded Gauntlet”, this is his first stand-alone offering, the freshman product, so to speak. And it uses a theme that had me, honestly, roll my eyes. I’ve reviewed so many shapechangers at this point, it’s hard to impress me with the concept, and ultimately, that may be the most major drawback of the class for me: It has to stand next to the Legendary Shifter by Legendary Games (the class I’d suggest using instead of Paizo’s shifter, if you want something with a very close design-analogue to the Paizo shifter), and, more importantly, next to Everybody Games’ fantastic shapeshifter class from Paranormal Adventures.

…and that’s kind of the issue here. The wildshaper would have been much more impressive a few years back; right now, I can’t help but feel that, in spite of executing its tropes well and precisely, it simply does not have the same level of customization as the Everybody Games shapeshifter. That being said, it does have a raison d’être: If you want a relatively simple shapeshifter class that still lets you customize it somewhat, and if you don’t want to use an engine analogue to Paizo’s shifter, then this is worth checking out.

That being said, it is a class that comes late to the party; in a nice enough suit, only to realize that some folks are standing around in resplendent dresses and frocks.

This is by no means a bad class, but neither is it one that will replace the other shapeshifting engines I’m using in my game. After much deliberation, even with the freshman bonus and the per se smooth execution, my final verdict can’t round up from 3.5 stars. That being said, I do hope the author continues to design – this class is perfectly serviceable, which is more than you can say about a lot of other options out there.

You can get the amazing Paranormal Adventures here on OBS!

The Legendary Shifter can be found here!