Treasury of the Machine

Treasury of the Machine 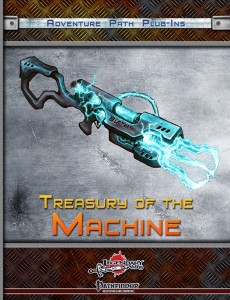 This pdf containing items intended for the use with the Iron Gods-AP clocks in at 28 pages, 1 page front cover, 2 pages editorial, 1 page ToC, 1 page introduction, 1 page SRD, 1 page back cover, leaving us with 21 pages of content, so let’s take a look!

We begin this book with a handy list of items by respective price, ranging from varies/50 GP to 180K gold/minor artifact-levels – quite a lot, so what can be found herein precisely? Well, we begin with the technological armor, the slipsuit, which enhances means to prevent being grappled or otherwise impeded. 3 forms of cybertech are provided thereafter – beginning with the amnesia tick and going on to provide discipline and rapture chips – whether to eliminate memories, create obedience or generate BTL (Better than life for non-Shadowrun-savvy readers…)-style bliss (yes, including potential for addiction), these items sport significant potential for story-telling and dystopian narratives…neat indeed, with a cool artwork as a bonus.

Temporarily sowing flesh together with nanite gauze – but where things become more interesting is with the three variants of adrenaline surges, which allow for stimpack-like rage-boosts…but each use puts a strain on the body…too many may even kill the user, providing a potentially hard decision for the PCs – one final boost and risk potential death/unconsciousness to defeat the dread foes…pretty cool! Biotech-wise, optic-enhancers granting low-light vision/darkvision and dermal grafts that provide nourishment via photosynthesis cover utility as well as narrative potential.

Chemosols are sprays that provide cones/can be inhaled and contain artificial pheromones and hormones, irritants or generate susceptibility to environmental conditions. Chemical stunners and a cloud that makes people stunned, but also has them twitch uncontrollably in random directions complement the material further – cool and unique!

Robotics-wise, we receive alternate design specs for androids designed akin to the non-human core-races and the pdf also sports a minor artifact that allows you to hijack robots in line of sight…nasty! Surprisingly, the pdf btw. sports a new robotic creature – the delightfully disturbing CR 1 walking eye, which has a neat little force field and a great full color artwork. Think of it as a disturbing flesh/metal-graft spy-drone. Damn cool!

Obviously, there also are quite a bunch of different technological items, including a capsule that hastens oxidization (think of these as rust-bombs…) and an orb that allows for the nigh-perfect duplication of scanned circuits. I also love the visuals of the detector globe: What basically is a rather conservative means of detecting poisons, magic, etc. is made awesome by the way it works: The glove rises in the air and sends scanning filaments out…pretty cool.

Also awesome – a unit that allows the wearer to pass through solid matter: The harder, the more charges are consumed…and yes, you don’t want to get stuck inside the material. Gravity belts that allow for personal gravity in Zero-G-environments similarly are damn cool! Similarly, quick retraining via a helm (utilizing downtime-rules from Ultimate Campaign) is just awesomeness. Oh, and what about a Batman style grappling hook with concise rules, one that also explains how the device is operated? Yeah, pretty glorious!

Speaking of which: What about a probe that can transfer memories? In the field of combat-utility, a means of at-range dousing fires/ridding characters of acid sludge/etc. most definitely will become a favorite of my PCs! Retina-based locks and universal tools as wella s solar charging options breathe a spirit of true imaginative potential that combines utility with potential for adventure-crafting and thumb-sized, inflatable sleeping bags for sub-zero conditions make sense. Thermite-like salts and preservation-enhancing vacuum sealers also are brilliant!

The pdf concludes with modern firearms, from heavy guns to automatic shotguns, as well as modifications like varying targeting computers, recoil compensators and scopes…though personally, I prefer other takes on the topic of recoil rules than those championed herein – average damage die as a modifier, reduced by Str-modifier, may be rather solid, but in the end is pretty complicated. Still, that’s a personal preference.

Tim Hitchcock, Robert Brookes, Jeff Lee, Jonathan H. Keith – these gentlemen seem to have had a field day here, with development from Jason Nelson: Treasury of the Machine is the most inspired book among the treasuries so far. This book has everything you’d want from an item-centric book: Heck, even basic spell-duplicators herein feel unique and sport some sort of twist that renders them distinct in mechanics and feeling. There literally is no filler herein, making this an all awesome smörgåsbord of pure awesomeness: When an item-book sports items that, in the vast majority of cases, manages to inspire the reader regarding modules; when such a book provides means of telling new and exciting stories – then you know, you’ve got something great on your hands. This is such a case. My final verdict for this inspired book will clock in at 5 stars + seal of approval.

You can get this inspiring item-book here on OBS and here on d20pfsrd.com’s shop!
Endzeitgeist out.