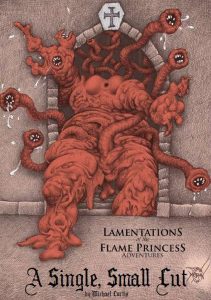 The material herein is intended for six 3rd level characters, and uses the LotFP (Lamentations of the Flame Princess) rules; it can be adapted to other OSR-games with relative ease. The action is set in a remote church and its crypt, which comes with full cartography. Puzzling: The supplement is a layered pdf, but does not allow you to turn off the annoying pieces of information like “Nave”, “Narthex”, “Font” or the like – so, alas, no player-friendly version included. This is a bit puzzling, as LotFP did that in some supplements. Statblocks are made easier to see by being in boxed text, but this measure has not been consistently implemented.

All right, only referees around? Great! So, the module begins with a pet-peeve of mine, namely that the lore of the encounter introduces a massive secret society/order, here, the Order of the Kite, a secret organization of Christianity to find and contain “Satanic” artifacts; notoriously underfunded, these individuals have now accumulated more dark artifacts than the enemy, i.e. everyone else. They proceeded to use those, in particularly the Red Bells, cut from a single garnet. One of their commanders was buried with the Red Bell beneath that church.

The inside of the church features a priest, who invites the PCs in – and PCs being careful can notice him sporting a single, small cut on his red head – a hint that he has hastily shaved his head and assumed the priest’s garments, for the “priest” is actually a wanted murderer. He and his cronies (lying in wait, with crossbows cocked) are here on the express orders of some sorcerer who learned about the bell. A single small cut (zing) from his recent shaving of a monk’s tonsure acts as a hint of danger, if the PCs have not yet been appropriately traumatized by friendly priests in The God That Crawls. While Clement “The Priest” secures the church, the sorcerer botches big time and rings the Red Bell –summoning a Corrector of Sins, the monster on the cover, which btw. has 6 attacks and 54 hit points, making it a frickin’ shredder, particularly considering LotFP’s further nerfed magic and offense capabilities of PCs!

Clement’s ambush can be devastating if the PCs fail to it, and after a few rounds, the crypt bursts open, and people stumble out – these are the survivors of the sorcerer’s retinue, and their stats are, oddly, not highlighted in the same boxes as other stats. The Corrector follows, and makes for a free-for-all, very tough battle. Correctors become more potent the more corpses are around when it’s called, so even if the PCs are victorious, a single careless moment with the Red Bell can be pretty deadly, since it’ll appear in the area with the greatest concentration of corpses – which may well be behind the PCs, potentially trapping them in the crypt.

Editing and formatting are good, I noticed no particular accumulation of hiccups. Layout adheres to a two-column b/w-standard, and the pdf sports a lot of original b/w-artworks. The cartography is b/w as well, but no player-friendly version is provided. The pdf is layered, but only lets you turn off graphics or text – having an art/map folio would have been a better call. The pdf has no bookmarks, but needs none at this length.

I am usually a pretty big fan of Michael Curtis’ writing, but this pdf, even considering its intended, limited scope, left me less than impressed. The monster is a standard flesh-tendril-y thing, the adversaries aren’t that interesting, and it’s all combat, in a system not designed to make combat that exciting.

Worse, the author actually did show that he can do a dark fantasy/horror church MUCH better: His temple in “The Croaking Fane” for DCC is superior to this module in every single way. The module’s base premise also is akin to the one employed in “The God That Crawls” and less impressive in its execution; the fact that the lore introduces yet another massive secret society is a downside as well, though at least one you can ignore with relative ease. Still, it takes up wordcount that could have been used to make the actual adventuring site sport more interactivity, which is woefully lacking. All in all, this is a combat cut-scene, with player-agenda limited beyond that to two decisions. And honestly, I think that’s lame – and puzzling, considering how the author did show how much better he can do. All in all, this might be worth getting for the low price, but I consider it to be a dud; I can improvise better scenarios. My final verdict will be 2.5 stars, rounded down.

You can get this combat cut-scene encounter here on OBS.

You can get The Croaking fane here on OBS!

Missed “The God That Crawls”? It can be found here!