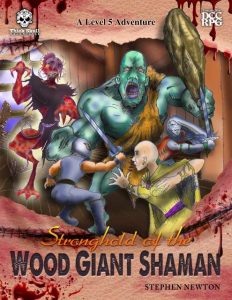 This module clocks in at 30 pages, 1 page front cover, 1 page editorial/ToC, 1 page SRD, 1 page back cover, leaving us with 26 pages of content, so let’s take a look!

Well, before we do: There are actually 4 pdfs included here:  The regular pdf, one without watermarks, and a second version laid out in digest-size (6’’ by 9’’/A5), if you prefer smaller booklets. The fourth pdf provides the b/w-maps in two iterations – one with all numbers and labels, and a second one without the labels. While I very much appreciate the inclusion of player-friendly maps in this mini-booklet, one of them has one instance where a secret-door-S has not been properly redacted, representing a minor spoiler here. While equipped with grids, the maps do not note a scale, which some of my readers would consider to be a minor inconvenience.

Theme-wise, this is a homage of sorts to “Against the Giants”, as seen through the lens of DCC. We already had that? Well, in contrast to “Beyond the Black Gate”, this is not intended to be played as an infiltration; we have basically a “take-the-fortress”-scenario here, and thus, difficulty very much can vary. Dumb PCs will probably die horribly, but then again, this is a 5th-level module, and if the PCs haven’t learned by now to use their brains, they deserve what’s coming to them. This is very much a player-driven sandbox that presents a detailed situation, and then lets the players figure out how to deal with it. Occupation bonuses, just fyi, have been noted where applicable.

The pdf includes a total of 4 new magic items (not including weaponry with unique properties and the like that can be gained in the module – these 4 items have a somewhat more detailed rendition), and 4 new monsters: The leg-breaking, ape-like squatches, catfish trolls, the dangerous beaver-like gicastors initially introduced in “Attack of the Frawgs!” and the eponymous wood giants. The latter get the most information, with sample treasure and their own, rather nasty and visceral crit-table – kudos for that! Organization-wise, the module also presents a handy GM-cheat-sheet that makes tracking the population of wood giants easier (names for individual giants noted, even if they use rank-and-file giant stats!). Speaking of which: Wood giants use a d22 Action Die and have notes for how to use that provided. The respective areas come with read-aloud text for your convenience, and the module does come with various hooks that the judge can employ to reel PCs in.

A nice plus would be that the module establishes global rules for the stronghold, as well as notes on intelligent enemy reactions – the giants will not simply wait as the PCs take them down one by one. Motivations are explained as well, and a wandering monster table for outside of the compound is provided for your convenience. It should also be noted that one of the artworks herein stands out – a massive b/w-one-page artwork of one of the climactic scenes of the module, it not only looks cool, it makes for a neat handout. It is also, quality-wise, better than the cover, so that was a nice surprise.

All right, only judges around? Great!  So, the first thing you’ll note, is that the stronghold, a fort of sorts, makes sense – from the wolves (curiously led by a demonic canine entity) to the catfish troll used as a living garbage disposal to the squatch-slaves, makes sense; this very much attempts to create an illusion of a plausible fortress, and succeeds in doing so. The outhouse has a truly limitless supply of nasty prune flies, wood spider swarms lair within woodpiles – this is a dangerous place for mortals; after all, the squatches fear their giant masters’ whips more than puny hoomanz.

Anyhow, PCs just thinking they’ll be stopping Goothlik the wood giant shaman will be in for a surprise – you see, the wood giant shaman has blasphemed against Veedarkaleesh, a mighty shadow demon, who promptly took note. As a diversion from his existential ennui, the demon has taken the shaman, consuming his soul; his skin is now worn as a flesh-suit by the demon, the shaman’s essence kept as the largest of several blood golem-giant things, with vampiric slugs transferring Goothlik’s essence to the demon in disguise, all while guarded by a wizard who got a particularly sucky deal for his patron bond with the shadow demon. Well. It’s a demon. He should have known better.

But I digress. Beyond a demoness (in the guide of a cheetah woman) and aforementioned minor hints may clue to the PCs in that something’s afoul – and there is this one portal that leads to the plane of shadow, where shadow lampreys and ethereal piranhas may attempt to feast on delicious light-bearers. It is also here that curious PCs may, via visions etc., get some ideas as to what happened if they so far haven’t played their cards right. This trip remains short, though. Ultimately, once the PCs return from this place, they will find a massacre if they haven’t yet left one – only the demon and his cronies remain, making for a rather brutal final combat. Plus-side: If the PCs were fooled by the cheetah woman-demon, they have the silver chain that once bound here, which could be just the tool to mean the difference between death and survival. As far as the demonic angle is concerned, I’d have loved to see a bit more of weirdness like the vampire slugs here; the module feels very well like a classic old-school adventure – this is intentional, but I figured it’d be worth mentioning.

Editing and formatting re very good on a formal and rules-language level. Layout adheres to Thick Skull Adventures’ two-column b/w-standard, with the b/w-artworks ranging from okay to awesome.  The (mostly) player-friendly versions of the solid b/w-cartography represents a serious plus as far as I’m concerned. The pdf comes with proper, nested bookmarks in all versions.

Stephen Newton’s homage to the classics here is a nice, sandboxy adventure. Challenging and fun, it makes for a nice and well-wrought take-the-stronghold type of sandbox. The support provided regarding maps, the details and the general sense of plausibility enhance this module beyond what you’d expect from it. At the same time, I couldn’t help but feel like this, with some minor modifications regarding the brief sojourn to another place and the final combat, could have become more epic/dire still. Then again, this is me nitpicking a well-crafted bow towards an all-time classic. Hence, my final verdict will clock in at 4.5 stars, rounded up due to in dubio pro reo.