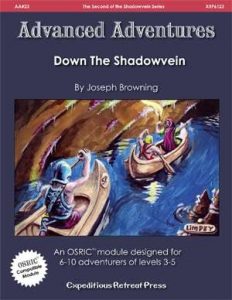 This installment of the Advanced Adventures-series clocks in at 25 pages, 1 page front/back cover, 1 page editorial/ToC, 1 page SRD, leaving us with 22 pages of content, so let’s take a look!

This review is part of a series of requests undertaken at the request of my patreon supporters, to be undertaken at my convenience.

Okay, so, as always, this module is penned with the OSRIC rules in mind, but conversion to other OSR rulesets is relatively painless. As always, we don’t get read-aloud text herein, and there are a couple of formal differences from the formatting conventions that OSRIC employs, but these, for the most part, apply in a mostly consistent manner. Nominally intended for 6-10 characters of level 3- 5, the adventure is challenging, but mostly in a way that is contingent on how the PCs interact with the environments found and encountered. Attempting to murder-hobo through everything can and will get you killed here.

There is one more aspect you may need to be aware of: This module represents a taking up of a dangling thread from the very first Advanced Adventures-module, “The Pod-Caverns of the Sinister Shroom” and may be run as a direct sequel to said adventure; knowledge of the previous module is not required, and it is pretty easy to integrate this module into the context of any prolonged underworld campaign or exploration, whether they are mega-dungeon-based or subterranean sagas like AAW Games’ excellent Rise of the Drow campaign. This module also represents the first of two modules that expand the material based on the eponymous Shadowvein, with “The Mouth of the Shadowvein” representing the second adventure and conclusion of the exploration. The Shadowvein, fyi, is a subterranean river, a black ribbon of water illuminated by purple and green lichen, with tendrils of almost snot-like strands hanging from them – colloquially known as “faerie sputum” to those traveling its length.

From a genre-perspective, we have a pretty free-form sandbox here – a subterranean hexcrawl, which, cleverly, uses the subterranean river Shadowvein as a kind of red thread that the PCs may or may not follow. The module does a pretty neat job at depicting the differences regarding the environment and sandbox style play: For one, we not only get different random encounter tables, they differentiate between passage types: You see, the overland hexcrawl map knows primary, secondary and tertiary passages, with different encounters suggested for each. As a whole, this module takes place in the “civilized” region of the underworld, with settlements and outposts providing a reflection of social dynamics and paradigms one could theoretically encounter in the sunlit world as well – it takes place in the realms of drow cities, dwarven holds, etc. The weirder aspects, where society and civilization tend to fall apart and be replaced with the truly strange may be found in the sequel, but I’m getting ahead of myself. The encounter tables thus focus primarily on humanoids, with very few other critters thrown in.

This is not to say that there is no strangeness here, mind you: There would, for example, be a need breed of monster, the furnace worm, that consumes rock and excretes valuable metals contained within; we are introduced to the subterranean trade-race dubbed “Noja”, 3- 4 ft. small humanoids with a penchant for mischief and trickery – almost like trader-fey/gnome-crossovers if you will. Interesting: The females and males of the race can cast different spells. The noja act as a kind of linchpin for the other two creatures introduced – the undal being pack animals with weird crowns of horns that allow them to execute nasty charges, and the wyrdwolves, which are basically canine critters with the ability to make their eyes glow in a blinding strobe that can temporarily blind prey. The latter may not sound like much, but personally, I enjoyed them. Their presentation makes them strange, yet plausible enough. It’s also nice to see the umber hulk concept regarding canines executed with a pretty different flavor here.

Much to my joy, the module remembered the hook of the PCs finding a map of the Shadowvein – a SPOILER-free player’s map of the Shadowvein has been provided, and yep, it does not feature issues and indeed, has some areas where it’s less reliable. I always like that kind of thing – big plus for going the extra mile here.

This module contains a total of 5 different “zoom-in” adventure locales that the PCs following the Shadowvein may find, and the map leaves enough space for GMs to add their own modules and encounters, should they choose to. These individual locales do come fully mapped, but in the case of a few of them, it’s pretty likely that the PCs could attain a map of the region, with no player-friendly version provided. This represents a comfort-detriment for folks like yours truly that suck at drawing maps. It should also be noted that this adventure contains two new magic items, though both, in some way, do influence the narrative, so if you’re curious about them, please consult the next section.

Okay, only GMs around? Great! The first lair to be found deals with a goblin tribe in the middle of internal strife – two months ago, chief and sub-chief killed each other, and indeed, there are currently two factions vying for control over the goblin tribe. As a nice change of pace, PCs who don’t want to murder-hobo through everything may find themselves recruited into a kind of mini-investigation that may see them uncover the truth about how the unique culture of this tribe, which includes ritual bathing [!!] of younglings, was weaponized for the coup-d’état that split the tribe into its current state. As is wont with such scenarios, outsiders like the PCs may well be recruited to end the semi-stalemate between factions.

The second encounter area has some nice horror/dark fantasy-tones: Once an outpost of loathsome bugbears, they have since then been slain by a magical disease that usually only affects those of giant stock, which is particularly likely for half-orcs and similar characters. Only two bugbears remain, both of whom have been transformed into strange horrors. Slaying them has the miasma turn into a kind of entity, which then proceeds to disperse. This scene, alongside the emptied caverns, actually managed to evoke an atmosphere we only rarely get to see executed so well, so kudos for that!

The third encounter area, a noja trading post, is a kind of neutral ground, enforced by a unique statue of a six-armed woman with serpentine lower bodies: The aura of peace makes hostilities here a superbly bad idea, and indeed, veterans may have gleaned that the statue is indeed a marilith – who is not happy about her cursed state. One of the encounter locations does include a magical item, the Tooth of Gorim Graal, which fortifies against fire, but also is the focus for the binding…which could result in a massacre if the PCs find it and proceed to ignore the warnings…and unleashed marilith will not be something the traders, noja, etc. can stop…

There is a similar connection between the penultimate encounter area and the last one – the second unique magic item included would be the Traveling Hammer of Dorin Graybeard, a mighty weapon sacred to dwarves, which, while providing powerful boons, does consume a percentage of the wearer’s treasure collected, and which doesn’t take kind to any bad treatment a dwarf may suffer from the wielder. Which is relevant, for, at one point, the PCs can happen upon a pretty massive dwarven hold that features a portcullis and toll bridge. Obviously, this region is also more focused on roleplaying than on killing everything, which is a nice change of pace.

The final encounter-location is easily by far the most deadly thing contained in the module – “The Snide Dungeon of the Mad Mage Hallach” is basically a gauntlet devised by a mad wizard, one studded with snarky and snide comments delivered via magical means. As such, the PCs and players are warned – this is not a complex to be trifled with, and any casualties are their own fault – well, they had to press onwards, didn’t they? As a gauntlet, it is exceedingly linear and intended as a challenge that requires genuine player skill to beat. It also is a wandering dungeon, that is, it will vanish if the PCs try to whittle it down via repeated sojourns, and could make for a pretty nice 4-hour convention slot game on its own. While challenging, and indeed, in some instances almost sadistic, it always remains fair…though the somewhat random white dragon boss at the end felt like a bit much to me. I just dislike dragons being used as random bosses, but this will not influence my final verdict, as it is part of my personal bias. Then again, the unique magic items noted can be found in its hoard, and the PCs that managed to get this far will have earned the loot.

Editing and formatting are good, bordering on very good, on a formal and rules-language level. Layout adheres to the series’ classic two-column b/w-standard, with a few decent b/w-artworks thrown in. The cartography does its job, and I really enjoyed the inclusion of a player-friendly map for the Shadowvein’s environments. It would have been nice to get player-friendly maps for the trade/social encounter areas at least, though. The pdf comes fully bookmarked for your convenience.

Joseph Browning’s first part of the exploration of the Shadowvein is a nice subterranean sandbox; in contrast to previous hex-based explorations in the series like “Under Shattered Mountain”, it zooms in a bit more and provides some genuinely fun and diverse locations to visit. I would have enjoyed a few more quest-seeds regarding the respective areas – as written, the loot for the challenge-dungeon represents one of the few connecting components that tie the individual encounter locations together. If you’re looking for a trade route to include into your underworld, one that gets the aesthetics established in books like the ones dealing with a certain scimitar-wielding renegade right, then this delivers. I can see this work well in contexts beyond its system, and while it doesn’t reach the same level of mind-blowing awesomeness as some of the author’s other modules, it does represent a great little adventure. Now, personally, I’d have loved to see more encounters actually atop the Shadowvein, focusing more on the experience of the river itself, but that may be me. All in all, I consider this to be a nice adventure, and as such, my final verdict for this as a stand-alone module will be 4 stars. Please do note, that this also represents a set-up that transitions from more subdued aesthetics towards the ever stranger, its payoffs to a degree  featuring in the sequel, so if you plan on going the whole way down the Shadowvein, then consider this to be 4.5 stars, rounded up instead.

Want the whole Shadowvein-bundle? It can be found here!

Enjoying my reviews? Please consider leaving a tip here on my patreon or via direct donation!