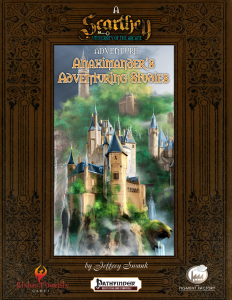 This module clocks in at 75 pages, 1 page front cover, 2 pages of editorial, 1 page ToC, 1 page SRD, 4 pages of advertisement, 1 page back cover, leaving us with 65 pages of content, so let’s take a look!

This adventure is intended as an introductory adventure for the Scarthey setting that depicts a Harry Potter-esque magic academy; I have covered the basic setting assumptions in my review of the “Welcome to Scarthey”-supplement. It should be noted, though, that, while useful to have, said supplement is not required in order to run this adventure. All the respective components required to run this in a meaningful manner have been included within. This includes, but is not limited to, a representation of the overview map of Scarthey’s campus, which still doesn’t feature a scale to denote the actual dimensions of the massive magic academy.

The basic assumption of the adventure is that the PCs are invited/admitted to Scarthey as part of Adventuring Studies, a program that seeks to generate an efficient adventuring party. This process is roughly grouped into not a few weeks, but is intended to cover no less than three in-game years, with the players taking control of their PCs for key scenes, so no, you won’t have to micromanage complex school-day/social life calendars. (Come to think of it: That’d have been awesome for nerds like yours truly…) Anyhow, this focus on a long-term adventure is something I only rarely get to see, so this is indeed something I am excited to see how it is performed!

The module features read-aloud text for key-scenes, but not every encounter, and also sports side-bars that help contextualize things, and indeed, it is interesting to note that the summary of the fields of operations the module classifies characters in includes the occult classes – kudos for catching and rectifying this oversight of the original Scarthey supplement. Another thing I really loved: At the end of each year, we get an “End of Term”-Report, a pretty fancy-looking document that makes for a great handout! This also extends to a certain outsider contract and a final diploma, all of which get their own handouts. Going above and beyond the required here, this aspect really rocks. A fully-gridded one-page Undervault map has been included (an unlabeled version would have been nice), and the supplement features a couple of rather nice full-color, unlabeled battle-mat-style maps for more complex encounters. Story awards for roleplaying are noted throughout the adventure, which I something I definitely consider great.

Structurally, the module can thus be seen as a primarily event-driven sequence of happenstances that allow for a significant freedom when it comes to the implementation of when and how to modify a given encounter; one could also argue that the structure of the adventure lends itself rather well to poaching components from its pages.

All right, that is pretty much as far as I can go without diving into SPOILERS. Potential players of this adventure should jump ahead to the conclusion.

All right, only GMs around? Great! After the introduction ceremony and welcoming speech of the Arcchancellor, the PCs will have a chance to mingle and become acquainted with the university grounds. Their dormitories are housed in the Undervaults, a massive series of caverns, with the armor of a once famous, nameless paladin acting as an appropriately magical guardian. The PCs are housed in the Octavius dormitory, so named for one of the university’s largest benefectors, and 4 adventurers to be are grouped per room to represent the four fields of operations. A concise list of fellow students, focused primarily on fluff-centric write-ups, but noting alignment, templates and classes if applicable, is provided as well, allowing an ambitious GM to potentially flesh out the class and fellow students in a Persona-like manner without much hassle – kudos here! Indeed, the PCs will have a nice candidate for the snobbish foil with the scion of the mighty Octavius clan, Kellin, being one of their fellow students – and yes, he does come fully statted. Oh, and his cronies? A gorgeous female and a halfing-sized slime-thing called Splish-splosh. Yes, this does embrace the magic-angle more than the “Welcome”-file did.

The PCs then will be undergoing a test (in which the best of them will be beaten by a hair’s breadth by Kellin) and then, they’ll be assigned to each other in a narrative conceit the module freely acknowledges to the GM, which I considered to be pretty refreshing. This would also be an excellent point in time to note that academic success is tracked throughout the module, with “Merits” making for a kind of currency and abstract measure of success. Further scenes deal with e.g. a guardian scroll trap left in the library to test the resourcefulness and mettle of PCs, and notes on the location where detention is held, and on a creature if the PCs wander off-limits – these are basically the global and intrdocutory floating scenes.

After these, we dive into the nit and grit of year 1, which includes scenes that encompass being attacked by a freed, animated rotating tumbler (in a class on, bingo, bypassing locks), trying to pass a trapped door. Defense class studies, pranks for breaking curfew that may or may not see the PCs outsmarted…and what about PCs being tasked to find the lost laundry building? Nope, that was no typo. The laundry building vanishes,  and it’ll be up to the PCs to deal with a mischievous, but not necessarily evil leprechaun!  Of course, dealing with their rivals and finally passing the exam should also be noted as steps that the PCs will have to succeed at on their way to becoming full-fledged adventurers! (As noted before – cool inclusion that we get an end-of-year document/certificate as a handout!)

Year 2 includes soup animating as oozes that need to be dealt with (surprisingly dangerous!), a brief “micro-dungeon” quest in the Undervaults to get the fully statted magical inkwell of the discipline’s founder at Scarthey (the eponymous Anaximander), and more – for example, the PCs will have to find a miniature phoenix on behalf of one of the deans: The critter is lavishly-illustrated and properly statted, including notes for use as a familiar! PCs (and players, if they’re new!) will learn to deal with swarms, and another test deals with first being afflicted with a curse, and then finding a way to undo it. Additionally, the PCs (and players) will learn to mind AoE-effects when e.g. attempting to secure fragile blossoms. The final exam is rather cool: The PCs are led into the forest, poisoned, and have to secure the eggs of a forest drake from a nearby cave-complex to get rid of the exotic poison.

During year 3, we have frost wights stalking the complex via obscure tunnels in the middle of summer vacations – and the PCs learn dealing with outsiders. This includes a smudged summoning circle and a devilish contract – the contract is reproduced, and indeed, the pdf goes so far as to provide not one, but two different addendums for PCs not so easily fooled by the devil’s clever contract – this was a really clever, well-executed version of the old trope. Kudos! During the PC’s time off, they may fight merrow on a lavishly-mapped beach, and then get their first underwater adventuring experience, if they play their cards right. A race to assemble an armor (nice mini-game). The PCs will also get to be paired with their (by now) loathed rivals in an encounter that features a smart badger, teaching cooperation once more.

The final exam of the class focuses on a sphere of annihilation that has appeared in a side tunnel, requiring the unearthing of a talisman…and as the PCs are briefed, the rector vanishes when tracing a curious rune – and right after that, dark folk assault from a secret door. The PCs will have a chance to save or leave Kellin to his fate – and ultimately find a secret study, where Anaximander, founder of the program and now a broken lich-thing bereft of his phylactery. Defeating the lich constitutes the end of the supplement and final exam – failure to do so does not result in death, though: Just in the requirement to repeat a year, as in that case, it turns out to be staged. Smart way to avoid frustration for new players!

Editing and formatting are very good on a formal and rules-language level. Layout adheres to the lavish and pretty impressive two-column full-color standard that made the first Scarthey-supplement such a joy to look at. The artworks are a great blending of perfectly fitting public domain and gorgeous full-color artworks. The cartography provides ranges from nice (encounter-maps) to okay (Undervault map), and the latter could have used a player-friendly version. It is my huge pleasure to announce that the Rising Phoenix crew learned from their mistakes – not only is the entire module studded with bookmarks that render navigation as comfortable as they should be, you can also highlight, copy and search the text, eliminating two serious gripes I had with the original Scarthey-supplement!

Jeffrey Swank delivers in spades in this module – not only is this long and could be deemed to be a sandbox of sorts that you can easily expand, it also does something I like: It teaches newbies the basics of adventuring…both PCs and players. The magical context ensures that veterans will have their fun as well, and indeed, personally, I consider this to be one of the best modules to introduce new players to Pathfinder – provided the GM knows what they are doing. The module does assume that the GM has some experience under their belt, and there may be modules that are easier to run. But as far as “teaching by doing” is concerned, this covers all the bases of the adventuring life. This, interestingly, generates a unity of themes between intent out-game and in-game, a notion I thoroughly enjoy. We also have the depth here that I was sorely missing from the “Welcome to Scarthey”-supplement – we learn about teaching methods, rivalries and the like, and the whole academy felt more vibrant and alive to me here. In short: This can be considered to be an impressive success, particularly since, unless I’m mistaken, this is the author’s first adventure.

It should, if the cool ideas and themes mentioned were not ample clue for you, also be noted that the module is appropriate for play with kids. While I probably would suggest it for ages 8+, there are serious differences between how sensitive kids are, so do take that with a grain of salt. This is a wholesome module that manages to capture the themes of rivalries and whimsy rather well. If there’s anything missing from this module, it’d have been nice to see scoring implemented a bit more thoroughly, and to have a player-friendly version of the Undervault. Bereft of any serious pieces of criticism beyond that, I will remain with a final verdict of 5 stars for this adventure, just short of my seal of approval. A grand step forward for Scarthey!

You can get this cool, unique adventure here on OBS!

Enjoying my reviews? If you do, please consider leaving a tip via patreon or direct donation.