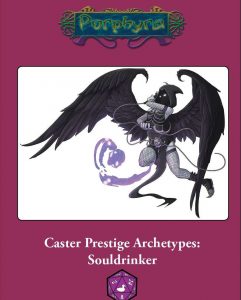 The final installment of the Caster Prestige Archetype-series clocks in at 9 pages, 1 page front cover, 2 pages of SRD, leaving us with 6 pages of content, so let’s take a look!

At this point, after I have covered 3 whole series of prestige archetype classes, I assume that you’re familiar with the concept and won’t bore you again with an explanation; instead, let us focus on the first thing you’ll note, namely a significant array of favored class options provided for the class, one that goes beyond the core and more uncommon races and also features several of Porphyra’s more exotic options. These generally add spells with limits based on race and also feature some enhancers for durations, racial feature uses, etc. Balance-wise, I noticed no broken components here. It should be noted that this is one of TWO such lists – the general list provided exists alongside a souldrinker specific FCO-list, which includes a couple of rather interesting, flavorful options: Dwarven souldrinkers are particularly capable when making items from souls, for example.

Class-chassis-wise, the souldrinker receives d6 HD and 2 + Int skills per level, proficiency with simple weapons, ½ BAB-progression and good Will-saves – as you may have noticed, the default chassis employed in building this fellow was the wizard (yep, full spellcasting), but there are alternate versions included. Arcanist souldrinkers do not modify the default chassis; clerics and oracles get modified BAB, saves, HD and proficiencies and clerics are subject to alignment restrictions, but gain two domains. Oracles gain a mystery, a curse and a revelation, but no further revelations down the road. Psychics may use the class’s pool as phrenic pool substitute and gain phrenic amplifications at 3rd, 7th and 11th level, excluding major ones. Sacerdotes gain massive domain selections; sorcerers have a bloodline, but only its skill and spells. Witches have a familiar-progression built-in.

At 1st level, the souldrinker chooses one of the four horsemen (not, not the designers) as the patron and, like other evil prestige archetypes, the class begins play as damned, making resurrection a less likely prospect. The class starts play with a familiar that is stark black and white and Neutral Evil. 2nd level yields energy drain – the ability to bestow negative levels to gain temporary hit points, though only when used against helpless targets. At 7th level, the attack may be employed as a melee touch attack; 13th level makes the use as a ranged touch attack (30 ft. range) possible and 18th level increases the negative levels bestowed to 2. Minor complaint here: With a sufficient amount of harmless critters, you can maintain the benefits of this ability, conservative though they are, indefinitely. An anti-kitten-caveat would have been appreciated here.

At 2nd level, we also gain a soul pool – for each negative level bestowed, the soul drinker gains 1 soul pool point – and here, THANKFULLY, the use of kittens, rats etc. to gain infinite soul points is NOT possible. Kudos for preventing abuse there. Cool: Exceptional beings may qualify still, even if their souls RAW would not qualify. The maximum number of points you can hold is ½ class level + spellcasting ability modifier. These points may be used as substitutions for costly material components, to recover spell slots (expend spell level soul points) or pretty quickly replace slain familiars. At 3rd level, summon monster spells may be paid for by soul points: Problem: RAW, the ability does allow a low level soul drinker to use the ability to cast high-level summon monster spells – the ability lacks the caveat that the spell duplicated must be one that the souldrinker could cast. 4th level allows for the use of soul points to extend the duration of summons. Cool: they may be used when the spell has already been cast. Not so cool: I have no idea how this interacts with partially elapsed spells: If, e.g., after 3 rounds I choose to extend the duration, does it reset its duration as though the creature had been called anew, or do the increments carry over when the ability is used to increase the increments from rounds to minutes? I assume the latter, but RAW, the class doesn’t define this one enough.

6th level yields a cacodaemon familiar and 9th level provides item creation and staff recharge options for the soul pool. 14th level upgrades that to the option to use soul points as replacements for wand or staff charges and scrolls. The capstone yields a daemonic apotheosis.

Now, I already mentioned the patrons: They come with listed symbols, domains and favored weapons and govern three abilities: 8th level yields a lesser oblivion, which is a passive benefit, namely immunities associated with the respective horseman. At 12th level, the oblivion is gained: An SP that costs 1 soul point to activate…and that has an INSANE DC: 10 + class level + spellcasting ability modifier. I am not sure if this massive DC is intentional; usually, ½ class level is what you’d expect. The 16th level ability would be greater oblivion, which costs 3 soul points to activate and is an SP, once more with the massively potent DC formula. Death nets fast healing 10 for 10 rounds and war nets greater magic weapon with an expanded list.

The pdf also features a supplemental feat that allows the character to call NE daemons via summon monster.

Editing and formatting are good, but not perfect on either formal or rules language level – I noticed a couple of commas missing (in a place where that caused confusion) and there are a few hiccups in the rules-language. The pdf comes with basic bookmarks.

Carl Cramér’s souldrinker is, flavor-wise, a nice take on the concept and rather inexpensive – at a very fair price, you get a solid, if not perfect little class. That being said, the hiccups that can be found did strike me as slightly odd, particularly when compared to the precision the Caster Prestige Archetypes-series has otherwise shown. As written, I unfortunately can’t go higher than 3 stars on this one.

You can get the soul drinker here on OBS!

While this one isn’t the strongest entry in the series, it does offer a rather cool selection of options and some true gems! You can get the whole subscription here on OBS!