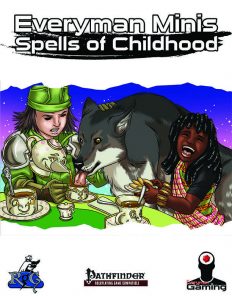 This installment of the Everyman Minis-series clocks in at 7 pages, 1 page front cover, 1 page editorial, 1 page SRD,1 page advertisement, leaving us with 3 pages of content, so let’s take a look!

So, in case you’re wondering – while, as a whole, perfectly capable of being used on its own, this pdf ultimately should be seen as an expansion to Everyman gaming’s Childhood Adventures-book, which focuses on all the aspects of playing kid/adolescent PCs.

As the introduction noted, magic for kids and children may actually have a different focus than that of adults – the priorities and, indeed, way in which the world is perceived, is different. This does NOT, however, make them change their priorities – kids want adult magic and have smart concepts of what would be useful and what wouldn’t. Instead of thus thinking of children as different in their sensibilities, the focus of the spells herein is on the experience of childhood and its aspects – and what would have been fun to have in a world where we could grow up with magic powers.

Thus, it should come as no surprise that the first spell herein is the alter meal cantrip, which can change taste of food or drink, diminish or enhance flavors (since I’ve been a chilli-head since early childhood, I’d know what I’d prefer!) or fix flaws in food presentation; the spell does not repair poisoned or diseased food etc. (and wouldn’t help my IRL allergies), but still -reading it, I could see the magical prodigy casting it on all foods to make the pesky greens taste better.

For children, not yet equipped with a fully functional moral compass in many cases, authority is important, a fact that also translates to the pecking orders in social groups and when interacting with the adult world; as such, assume authority could come directly from a funny hijinxs movie – it allows the caster to impersonate a position of authority when interacting with targets. Radical appearance taps into the same vein of thinking, but instead focuses on making the character look particularly cool – which translates to a morale boost AND to potentially being accepted easier by a clique or organization, as you totally get them. (The starting attitude improves.)

Fingerpaint is a particularly rare cantrip, occluded in history…sorry, just kidding. The cantrip lets you secrete paint from the fingers, though the pdf, amusingly, uses the word “Secret” instead…hence my lame attempt at a joke. Gross globule is amazing – it’s basically a nauseating water-bomb! Come on, ladies and gents, I know that a couple of you also enjoyed gross-out battles with algae, dried worms, etc. To me, that spell felt most definitely like something a magical prodigy would research! Humiliating trick is a 2nd level spell that allows you to perform at-range combat maneuvers – cool here, from a mechanical perspective: Each use decreases the duration of the spell and no, grapple isn’t in the cards.

Finally, there would be…the magical tea party! This 3rd level spell conjures forth and animates all the things you’d require for a proper tea party (no, the animated objects can’t fight for you) and the spell fortifies you against diseases, sickened conditions, etc. and allows even for rerolls. The spell is tightly codified, flavorful…and frankly, I can see devoted servant characters, battle butlers/maids etc. cast this one as well. My first associations here were Alice and then a variety of anime inspired by Victorian aesthetics…so yeah, definitely not a kid-only spell!

Editing and formatting are, as a whole, very good on formal and rules-language levels. Layout adheres to the relatively printer-friendly 2-column standard of the series and the artwork features is nice. The pdf has no bookmarks, but needs none at this length.

Alexander Augunas’ spells related to childhood and childhood whimsy are a well-crafted little collection; they make sense, cover all the classes (ACG + Occult support), are flavorful and make sense, not just within the context of kid-PCs. Heck, jester-type characters can have a field day with these as well and there are plenty of other, flavorful uses for this collection!

As a whole, I enjoyed this mini and thus will settle on a final verdict of 4.5 stars, rounded up for the purpose of this platform.

You can get this nifty little pdf here on OBS!

You can get Childhood Adventures here on OBS!