Animal Races: Clan of the Ox

Animal Races: Clan of the Ox 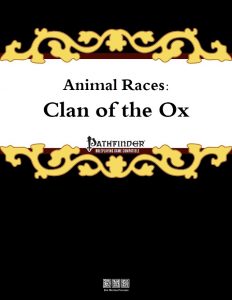 The clan of the ox as a race is one of basically minotaurs, which, as the pdf mentions “Sacred cow” stemming from the derogatory moniker for a particularly devout individual. As such, these guys are medium humanoids with the minotaur subtype, low-light vision and a +1 natural AC-bonus that increases to +2 at 10th level. The race receives 5-ft-scent that increases in range to 30 ft. at 6th level and a 1d4 primary natural gore attack for Medium members of the clan, 1d6 for Large ones.

Now, what does these heritage feats unlock? To recap, if this is the first review of a pdf of this series you read – basically, they provide a selection of different abilities; the more often you take them, the more you get to choose and once you have enough of them, you unlock more powerful options, though they have a scaling prereq-caveat that prevents abuse via feat-heavy classes. Ox Clan Heritage lets you select beast of burden (which increases your carrying capacity), fast movement, improved gore, powerful charge or trample; once these have been covered, the therian may learn either improved trample or grow to Large-size. If you instead gain the Ox Clan Mountaineer, you may select fast movement, improved gore, insulated fur, powerful charge or trample. Similarly, improved trample and Large size can be taken beyond that. In case you were wondering – insulated fur renders you scentless and immune to nonlethal cold damage.

The Ox Clan Rice Farmer heritage feat allows for the selection of beast of burden, improved gore, powerful charge, swamp stride or trample – once these have been chosen, you can select improved trample, or – bingo, grow to Large size. As always, we also receive extensive notes on the genealogy of the evocative clan and the pdf dives deep into the lore of our game, tying monsters like gorgons or thanadaemons to the folklore and mythology of the clan.

The pdf also covers the deity of the ox-therians, namely Athor, also known as the eye of Ra. Beyond this nice write-up, we receive a total of 6 of the awesome heraldry traits – as we’ve come to expect from these, they do exceed in raw power traditional traits, but come with a slight drawback each to make up for that – no balance complaints regarding them, just fyi.

Interesting – the clan of the ox seems to love jewelry and regalia and thus, magic items they create often tend to look differently – this section can be a bit opaque. If an eye-slot item thus occupies a forehead, does this mean it occupies the headband slot? I assume that this is mostly intended to be a cosmetic modification.

The final section of the pdf may also be one of its most inspired components: The PCs can for example engage in a crossover of an aurochs drinking game and a ritual combat, explained step by step – which is amazing. Additionally, rules for Corrida and Encierro can be found herein – love these cultural practices.

Eric Morton’s Clan of the Ox is yet another excellent installment in the series – balanced, flavorful and interesting, the pdf doesn’t leave much to be desired. And yes, age, height and weight tables are included, though no favored class options can be found. Unlike other such offerings, there are already a couple of nice minotaur-ish options as competition, though the balance herein is pretty immaculate. I do think that there is more potential for the race than necessarily realized here, but the pdf remains an interesting, smart option. I am only nitpicking at a very high level here, though -. my final verdict will clock in at 5 stars.

You can get this inexpensive, flavorful pdf here on OBS!
Endzeitgeist out.