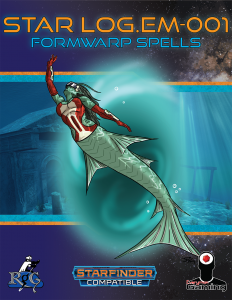 This pdf contains 2 spells, both of which exist for levels 1-6, with both spells available at all spell levels for mystic and technomancer. They also feature the (formwarp) descriptor, which is concisely-defined herein in its interaction with e.g. polymorph effects.

Both of the spells cam be cast as a standard action; formwarp has a close range and targets one creature, while transmute body has a target of personal. Both last for 1 min/level and are dismissible. Formwarp has an interesting and rather complex structure: It has formwarp lists for each level and then provides subheaders that also denote the systems they modify:  Take e.g. climber’s soles: At 1st level, we have climbing speed 20 ft., or + 10 ft. enhancement bonus climbing speed. At 6th spell level, we have a climb “peed”[sic!] of 70 feet, or +60 ft.-enhancement bonus to climbing speed, as well as allowing for the climbing of perfectly smooth surfaces. At 3rd level, you don’t have to use your hands to climb, for example. Each level has something unique going on. Take digitigrades locomotion: Jet Dash, run as a move action, withdraw as a move action (balanced by becoming flat-footed and off-target)…these bonuses offer SERIOUS and important tactical benefits, while retaining the balancing of the game. Gaining blindsight and variations of blindsense, gaining additional arms, natural weapons…what about quicker drawing of multiple items? Or piscine transmutations? This spell is a mighty engine and it certainly can change tactics in a unique manner.

Transmute body is frickin’ brutal – it makes you choose one type of energy or matter, with matter providing the more significant damage output of e.g. the modified unarmed damage inflicted. Each choice has different resistances/DRs and additional qualities/weaknesses. Matter provides scaling fortification. If energy is chosen instead, the character becomes incorporeal, which is one of the by far best defensive options in SFRPG – as soon as first level! Granted, the individual forms do have weaknesses, but getting incorporeal at the lowest level is imho too strong – going the route of partial incorporeity, with scaling and minor versions of the defenses increasing at higher levels, might have been the better call. A further nitpick with this spell would be that the damage types of the respective attacks granted are not classified. While it is obvious what damage electricity forms will inflict, the same can’t necessarily be said about radiant and shadow forms – while Starfinder does have suitable damage types here, having them spelled out would have been a big convenience boost – and prevent RAW-discussions. On the plus side, while not perfect, we do get two new universal monster rules, namely absorb and spines, adding to the game. And while I am not happy with low-level incorporeity, I don’t think that the spell as such will break the game. My balance-concern, particularly for incorporeal forms at low levels, though, remains.

Finally, the introduction page contains 3 feats: If you can cast the 1st-level version of formwarp, you’re eligible to take Formwarp Knowledge, which lets you choose four additional formwarps for each spell level of the formwarp spell you have. Body Transmutation Knowledge  requires that you be able to cast transmute body at 1st level, which lets you choose four additional energy or matter forms for each spell level of transmute body. Formwarp Adept lets you change formwarp spells targeting yourself as a standard action, switching the current formwarp to another of an equal level or less. Nice!

Editing and formatting are good on a formal and rules-language level. Layout adheres to the series’ two-column full-color standard, and the pdf sports a nice full-color artwork. The pdf has no bookmarks, but needs none at its length.

Alexander Augunas presents two mighty spell-engines here, both of which are very interesting and broad in their applications. Both are tough cookies to design, and should enrich most games; while personally, I’ll use a formula akin to how the gradual increase of fortification behaves for transmute body’s matter forms to nerf the incorporeity components of the spell, I still very much like this supplement. Lower-powered groups might want to beware of the unmodified version of the second spell…and yet, I can’t help but admire the complexity of the material, its ambition and how well it is, ultimately executed considering that. That, and I always prefer ambition and daring with minor flaws over boring and safe cookie-cutter files that execute their blandness properly. This pdf is many things, but “boring” or “simple” are certainly two things that this is not, which is why my final verdict will clock in at 4 stars.

You can get these complex, interesting spells here on OBS!

They are btw. also included in the massive Super-bundle available here!

Reviewing takes a ton of time and effort. Please consider leaving a donation, or joining my patreon. Thank you.