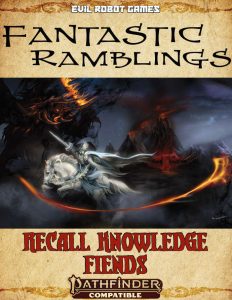 The second installment of the Recall Knowledge-pdfs clocks in at 27 pages, 1 page front cover, 1 page editorial/ToC, 1 page SRD, leaving us with 24 pages of content, so let’s take a look!

This review was moved up in my reviewing queue as a priority review at the request of my patreons.

PF2’s Recall knowledge use of the Lore skill, with its sub-categories, is something I genuinely loved seeing, and which I felt to be curiously absent from the Bestiary – and as such, I very much welcome what this series brings to the table for the GM. In this supplement, the sub-categories will be Daemons, Demons, Devils, or Religion; non-unique fiends are assumed to be common, as far as creature rarity is considered regarding the skill’s application. The DC of the catch-all Religion tends to be 5 higher than the specialized skill. A handy table of DCs by level and DCs by rarity adjustment, as well as a list of creature trait and identifying skill is provided. Finally, a best-known ability is also provided per creature.

And here, the pdf does offer something genuinely useful for the GM. Know how I often mention how important legwork, doing your research, playing smart, is in my game? It should come as no surprise, then, that having the respective skills and thinking about the adversary? It’s a very potent tool. Anyhow, there are a few issues arising from such a playstyle, as most GMs can attest: You not only have to have facts and information ready, preferably ones that do not consist of rules terms (because that breaks immersion), you also should have an assortment of pieces of information that MIGHT be correct, but which is actually false. Because, if your information is too obviously being BS, the players will immediately recognize that, right? So, in a way, this rewards character AND player-knowledge – and that’s a good thing as far as I’m concerned.

Anyhow, this is where this little supplement comes in: Not only do we get correct information for the respective creatures, phrased in a way that does not break immersion overtly by referencing an undue amount of game-terms, but ALSO erroneous information that might be half-truths or plain false…but which remains plausible. At least that’s the goal, so let’s see how this fares!

First thing you’ll notice would be that the respective subtypes of fiend, i.e. demons, daemons, devils, get their own tables of general knowledge; true knowledge tends to be presented in a table that ranges from 4 entries (roll a d4) to up to 12 (roll a d12), while the general type tables provide another 8 entries per creature. Of course, as noted before, the validity and draw of these entries is partially contingent on your ability to interpret the information – and in many instances, this is simple: When the pdf states that vrocks are fearsome combatants with various physical attacks? Then nobody will dispute that. However, this book does make good use of PF2’s increased focus on unique abilities in creatures.

Without flipping open your Bestiary, tell me: Can vrocks be placated by showing them signs of self-harm, or are they particularly vulnerable to spells and effects that force them to behave peacefully? One of these is correct, one is incorrect – and yes, this is one of the reasons the bestiary fared better in my review than I expected it to. These components, these aspects that reward ROLEplaying, not just rolling dice, really add to the creature.

And with this pdf and its entries, simulating how the PCs AND players accumulate information about the adversaries they face, becomes simply more organic – in a way, the book has identified a strength of the system and heightens it. Since I don’t want to stray too much, and since all precise entries I mention are, ultimately, spoilers, I’ll keep to the ole’ vrock for now: What would you say: Are eagles natural enemies of vrocks? True or false? (And yes, speculation at the table over such entries? Super fun!)

Beyond daemons, demons and devils, the supplement also covers barghests, greater barghests, hell hounds (including Nessians), nightmares (+greater variant), nighthags, rakshasas…and, of course, Treerazer. Now this deadly bastard is obviously closed IP of Paizo, but still very much easy to identify – it’s the entry for a level 25 creature called “The Tyrant” – and guess what? The Blackaxe? It has its own lore tables!

So yeah, in many ways, this feels like a refinement, when contrasted to the first installment of the series – and that is a good thing. That being said, there is one aspect on a formal editing side of things that really irked me: Plural/singular snafus. “Nightmares can cause its hooves…”[sic!], plural/apostrophe hiccups and the like – the entries check out, are cool and creative, and the DCs are appropriate. It’s just that the pdf could have used a final proofreading. While we do have an instance where “psychic damage” is referenced and the damage type is actually “mental damage” in PF2, I assume deliberate intent here, trying to rephrase the term to not be so rules-language-y. This still could potentially be construed to be a glitch, as psychic damage is a damage type in 5e. I have elected to assume deliberate intent here, though.

Editing and formatting on a rules-language level are very good; on a formal level, the pdf has more small glitches than I am ultimately happy with; it’s not bad, but it’s an aspect that is pretty obvious to me. Layout adheres to the series’ two-column full-color standard, with quite a bunch of nice full-color artworks, some of which fans of Rick Hershey might be familiar with. The pdf comes fully bookmarked for your convenience, with detailed, nested bookmarks – kudos indeed!

Jim Milligan’s second Recall Knowledge-pdf is a great step forward, as far as I’m concerned. While the typo-glitches deprive this pdf of my unconditional praise, I absolutely love the direction the Recall Knowledge-series is taking. The incorrect information is plausible, and often ties in with folklore, half-remembered stories and the like, and in many cases, some components were so compelling, I genuinely contemplate making them true in my game! There is e.g. one instance, where the pdf remarks, that a specific demon might be driven away by a child’s tears. That does seem appropriately magical to me, and something I most assuredly will use in some form or another.

So yeah, there might be a couple of typos herein, but I genuinely consider this pdf to be useful, inspiring and simply handy to have; if anything, it further convinced me that my assertions in the review of the first pdf were correct: This series has potential galore, and I want more! Hey, that rhymes…now tell me, can a rhyme drive away one of these fiends? My final verdict will be 4.5 stars, rounded down.

You can get this neat, handy pdf here on OBS!

If my reviews help you find gems you’d have otherwise missed, please consider leaving a donation, or joining my patreon. Thank you. If you want me to cover more PF2-materials than I currently am, then this is also a great way to tell me to do so. 😉