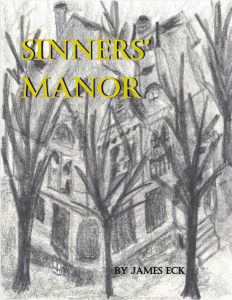 This brief adventure module clocks in at 19 pages, 1 page front cover, 1 page ToC, leaving us with 17 pages of content. No SRD is included, which is odd.

This module is a mansion-crawl and comes with player-friendly versions of the manor’s map, which note their grids, but no scale; the usual 5 x 5 feet would make it very cramped indeed. The module also contains paper-minis – both in full-color and as b/w-drawings. The b/w-drawings are vastly superior; while it shows that the author is no accomplished illustrator, they work. The garish full-color versions…don’t. Still, kudos for the inclusion of, in particular, the b/w-versions. The pdf comes with internal hyperlinks, which is helpful – character notices an item? One click, and you’re there

This module is intended to be run with D&D 5e-rules, and is intended for a 1st level party as a deadly adventure; the module does have a section that walks the GM through some of the design decisions – and if your players think they’re smart, they will learn the hard way that, not only are the opponents all bosses, the module needs to be cleared in one day. I liked this decision – it prevents long rest-scumming.

5 magic items are included; one would be a lesser healing item. Another is a mirror with limited daily uses of flesh to stone; another nets you Expertise (double proficiency bonus) in Stealth and Slight[sic! – the pdf gets that consistently wrong throughout] of Hand; there is a ring for a 1/day barbarian rage, and a gold-only locate object at will item. I liked none of these, and they would imho be serious overkill for first level; that being said, the useful items have curses that act as serious detriments. The items or curses are not as interesting as some in “A Blessing and a Curse”, and much to my chagrin, no removal conditions are included, but yeah. Okay.

The pdf sports no read-aloud text, and formatting-wise, it should be noted that the pdf tends to use the proper skills and formatting in most, but not all cases (e.g. tools). Classes are, oddly enough, capitalized, and monster names are printed in italics throughout, which strikes me as a weird decision, as it can be kinda confusing.

So, there’s this manor, ostensibly haunted or occupied – 7 grandchildren of Henri Sumner, each aligned with one of the deadly sins, used to throw parties. Something horrible happened, and ever since then, people have been disappearing there – including a team of adventurers. Davis O’Chuul hires the party to clear out the manor and provides some healing bulbs, aforementioned minor healing items. Oh boy, the party will need them.

There is another thing you need to know: The rather lame “Seven Dead Sinners”-pdf of sin-themed undead? They are in this pdf as well. Only, they kinda aren’t – at least not in their nigh-useless original iteration. You see, where previously, they had next to no value due to their concepts (one undead for every one of the seven deadly sins) being tired and bland, there now is something that even jaded ole’ me can appreciate about them: They get proper 5e-stats. And I don’t mean sucky ones, but actually pretty tough cookie stats; all of these undead are essentially bosses, with some approaching even 100 hit points, with 95; these are offset by a pitiful AC of 7 and atrocious 5 ft. movement, granted, but you get the idea – if you’re not smart, you will die. Heck, you might still die when faced with the boss. The module is not playing when it states that it is deadly. Much to my pleasant surprise, I noticed no glitches in the statblocks or ability-formatting. Kudos for getting these right. So yeah, while I still maintain that the concept is boring (compared to all those delightful sin-themed monsters out there), the array of well-crafted, genuinely tough low-level stats? That’s a reason to download the pdf. It should be noted that there is implied incest going on between the undead representing lust and the one representing wrath, though only the GM needs to know about this.

The manor provides quite a few nice details – but I couldn’t help but notice that there is a good chance that the party will run into potentially more than one of these bosses at once. Since the map sports no scale, and since it can be rather cramped, this can easily result in the party being trapped. Sure, this is a horror-module, but yeah – a GM might wish to be careful with the undead. Anyhow, my main gripe with the presentation of the module is two-fold – the rules-relevant components tend to blend in with the text describing the places, making quick information-parsing tough…and then there is the fact that I can generate a more interesting manor in 30 minutes with Zzarchov Kowolski’s “The Price of Evil.”

Editing and formatting is very good on a rules-language level; on a formal level, I noticed a few more hiccups. Layout adheres to Mind Weave RPG’s two-column b/w-standard with golden headers, and the artworks presented for the undead are charming b/w hand-drawn pieces; if you can appreciate the cover-art, you can also like these. I liked the inclusion of internal hyperlinks and paper-minis, and the player-friendly maps would have been nice, had they a) more details (e.g. tables etc.) and b) a scale. The pdf, unfortunately, sports no bookmarks, making navigation a pain – not cool. The pdf comes with an archive of the images for Roll20 etc.

James Eck’s Sinners’ Manor is interesting in many ways; the module plays better than it reads; the manor may be barebones, but much to my absolute surprise, the focus on extremely tough boss monsters that often may be tackled in safer means by smart parties rendered this much more compelling that it honestly has any right to be; it’s a perfect example of good creature design elevating a per se painfully mediocre concept underlying them.

Indeed, I think that the 5e-stats of creatures I considered to be super-boring in their system neutral iterations actually make for the main draw of this one. The manor may not be the most interesting out there, but all in all, you can do worse – for PWYW, this might well be worth checking out, particularly if you want some sin-themed low-level bosses to scavenge. As such, my final verdict for this pdf, in spite of its shortcomings, will be 2.5 stars, rounded up due to its PWYW status. I still think that Zzarchov Kowolski’s “The Price of Evil” is the better choice, though – while it has no 5e stats, if you’re even remotely interested in making a compelling mansion-crawl, you can’t do better than that one – add in hazards and critters, it’ll deliver a stand-out mansion-crawling experience.

You can get this manor-crawl here on OBS for PWYW!

The excellent mansion-crawl generator “The Price of Evil” can be purchased here!